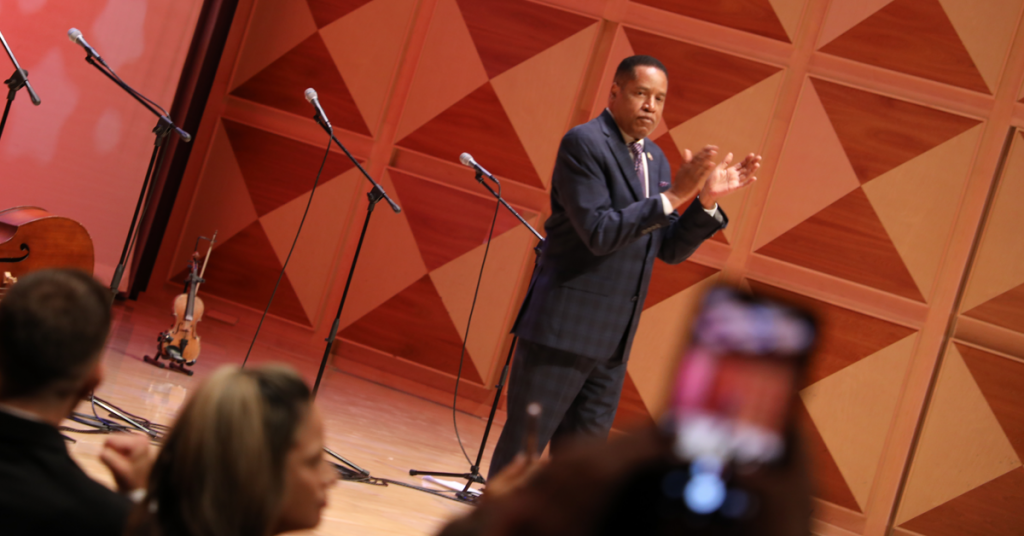 “I’ve been a politician for five weeks, how am I doin’?” Larry Elder, the talk radio-turned-gubernatorial spectacle asked.

Elder, who left the comfort of his Los Angeles-based studio to jump into the rough-and-tumble of California’s statewide politics, has found himself taking on plenty of criticism of late.

From Gov. Gavin Newsom, who has begun discussing the radio host by name in campaign events, Elder is nothing but a Trump Republican.

And from his ex-fiancée Alexandra Datig and his fellow Republican gubernatorial contenders, personal vices and abuse toward others are disqualifying from higher office.

Other barbs aren’t even bristling – but merely badges of honor.

It’s become the latest zinger in Elder’s quiver on the stump, underscoring a one-party establishment freakout heading into the stretch of a second historic recall election in the Golden State.

“You know they’re scared when they call you the ‘Black face of white supremacy,'” he joked to kick-off.

The talk host touched on his upbringing from South Central Los Angeles, discussing a 10-year falling out with his father and their eventual repaired relationship, but hammered on the key issues in the race: a stagnating economy, high crime, failing schools, and the catalyst that delivered a Sept. 14 election: the coronavirus pandemic.

Elder, whose family home in South Central – purchased by his eighth grade dropout father in the Cold War era – has seen its value skyrocket to a dizzying $600,000 price tag as the state average crept to a national high of $800,000.

“Lucky for us, it’s still in the family,” he added.

The culprit to the state’s housing crisis, as he intimated in his Sun interview weeks ago, is the California Environmental Quality Act, the state’s marquee environmental law often seen as an impediment to development.

His position: declare a statewide emergency on housing to roll back key elements of the law and pave the way for spurred development.

And while the pandemic has increased the hunger for homes, Elder spent considerable time noting the deep damage inflicted by the Newsom administration leading up to the recall election.

“One third of all small businesses have now been closed forever,” Elder said to audible gasps. “The hopes and dreams of men and women who mortgaged their homes – mortgaged their lives – gone forever while [Newsom] allowed his own winery to remain open.”

On Sunday, Elder pointed out a distinct advantage carried by Newsom: his ability to raise unlimited sums of cash to fight off the recall.

As he touched on key issues, didn’t shy away from castigating some of Newsom’s biggest backers in the recall: public employee and teacher’s unions, who have sent hefty sums to that anti-recall committee.

As for the coronavirus, Elder committed that – should vaccine and mask mandates continue to be on the books – he’d throw them out as Governor.

“I don’t drink coffee, I drink tea,” Elder prefaced. “When I become Governor, assuming there are still mandates for vaccines and mandates for face masks, they will be repealed before my first cup of tea.”

The Fresno rally was Elder’s second visit to the San Joaquin Valley since entering the race, with a previous fundraiser in Bakersfield shortly after announcing his candidacy.

He spent the morning at church services for downtown Fresno’s Cornerstone Church.

Shortly after his rally Sunday afternoon, Politico reported a shake-up atop of the Elder campaign, with veteran GOP consultant Jeff Corless replacing Louis Barnett as campaign manager of the insurgent effort.

Barnett isn’t leaving Elderworld, so to speak. The pub reported that he’ll be joining Elder’s ballot measure committee, modeled after Newsom’s, that is able to raise unlimited sums to advocate for voters to support the recall effort.