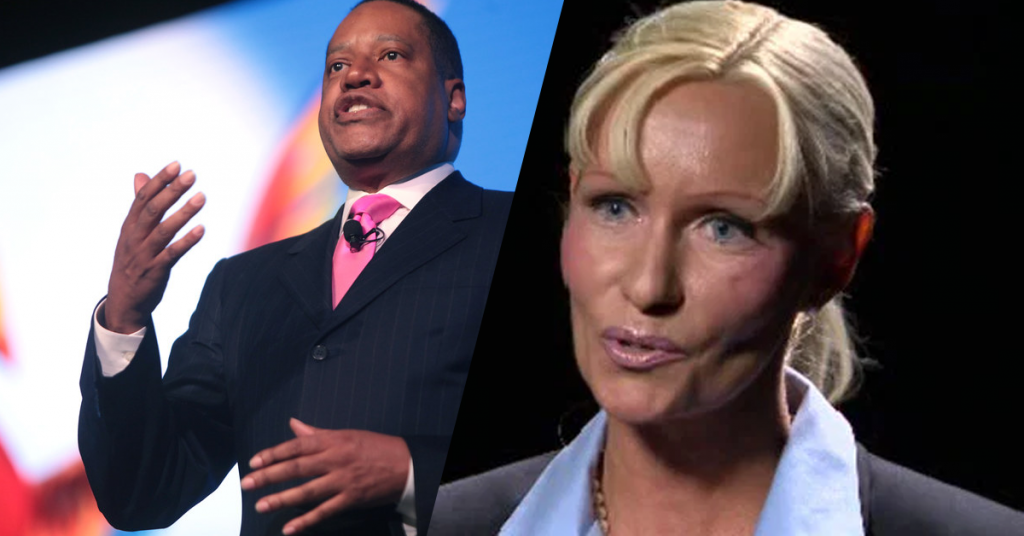 After attempts to get out of a non-disclosure agreement, Alexandra Datig, the former producer and fiancée of talk radio host Larry Elder, is speaking out regardless of the consequences.

Datig, speaking to Politico on Thursday, said her 18-month engagement with Elder came to a swift end after the radio host brandished a gun, waving it at her, while high on marijuana.

Speaking to the national pub, Datig described Elder as “a marijuana user who would often become threatening or insistent with her…”

When she and the gubernatorial contender first met, he was frequently partying with members of Hollywood’s A and B-list, particularly at the Playboy Mansion.

In one home video she turned over to the publication, Elder brags about his relationship with Snoop Dogg, saying, “I introduced him to the evil weed… I taught him everything he knows…I’m the one who made him what he is, I can’t believe he turned his back on me, motherfucker.”

The pair were in the midst of a heated argument in 2015 at home when Elder “walked over to the nightstand, opened the door, and took out” a .45 pistol, the pub reported.

“For a minute there … I thought it was a Phil Spector moment,’’ Datig told the publication, referring to the record producer who killed Lana Clarkson in 2003.

“My fear was great, and I understood I needed to de-escalate.”

He has come under attack by former San Diego Mayor Kevin Faulconer about a pair of comments – one over women’s intelligence in a 2000 Capitalism magazine column, and another backing a form of workplace pregnancy discrimination in his 2002 book.

Independently, Datig has slowly grown louder in recent weeks as questions of Elder’s attitude toward women have become more exposed.

Elder’s ex, now the publisher of the Front Page Index, repeatedly underscored that Elder was a “heavy consumer of marijuana.”

Datig did, with a design resembling the Superman logo, expecting Elder to reciprocate.

He didn’t, she said.

Datig, a former call girl who helped prosecutors bring down madam Heidi Fleiss in the early 1990s, said the tattoo incident was a more subdued version of sex trafficker branding.

The 51-year-old ex-producer and fiancée said she was pressured into a non-disclosure agreement by Elder, pointing to comments made by his assistant that all of his other girlfriends had signed similar gag orders.

Shortly after publication, Orin Heatlie, a top activist who led the charge to get the 2021 recall to the ballot, issued a terse statement about the allegations.

“A friend once told me: there is always an element of truth in Rumor and Humor,” he tweeted.

In the wake of Datig’s allegations, Elder and his camp largely remained mum on the subject.

However, more than 30 minutes after the story was released, the campaign issued a Pat Hill-style “anywhere, anytime” debate challenge to Gov. Gavin Newsom with “opening statements, rebuttals, mutual cross-examinations, concluding statements, and a moderator present to enforce time limits.”

Shortly thereafter, Elder made an appearance on Fresno-based KMJ’s “Ray Appleton Show” where Appleton failed to raise a question related to the allegations, only briefly discussing attacks previously leveled by Faulconer.

Late Thursday afternoon, Elder broke his silence on Twitter with the simultaneously denying the allegations and claiming he would not “dignify this with a response:”

“I have never brandished a gun at anyone. I grew up in South Central; I know exactly how destructive this type of behavior is. It’s not me, and everyone who knows me knows it’s not me. These are salacious allegations. People do not get into public life precisely because of this type of politics of personal destruction. I am not going to dignify this with a response—it’s beneath me. While my opponents and the Newsom campaign would love to keep voters distracted, I am going to stay focused on the issues that inspired 1.7 million Californians to petition for this recall.“

“While I have no personal knowledge of these events, what has been reported is very disturbing,” Kiley said in a statement. “I believe that any woman who comes forward deserves to be heard, and Ms. Datig’s deeply troubling account should be treated with the utmost seriousness. Mr. Elder should be given every opportunity to respond.”

Jenner threw a barb at Elder, too.

“While [Gavin] Newsom is a failed governor with massive corruption and fraud we have another candidate in the recall that is a violent womanizer and too far right for CA,” she tweeted.