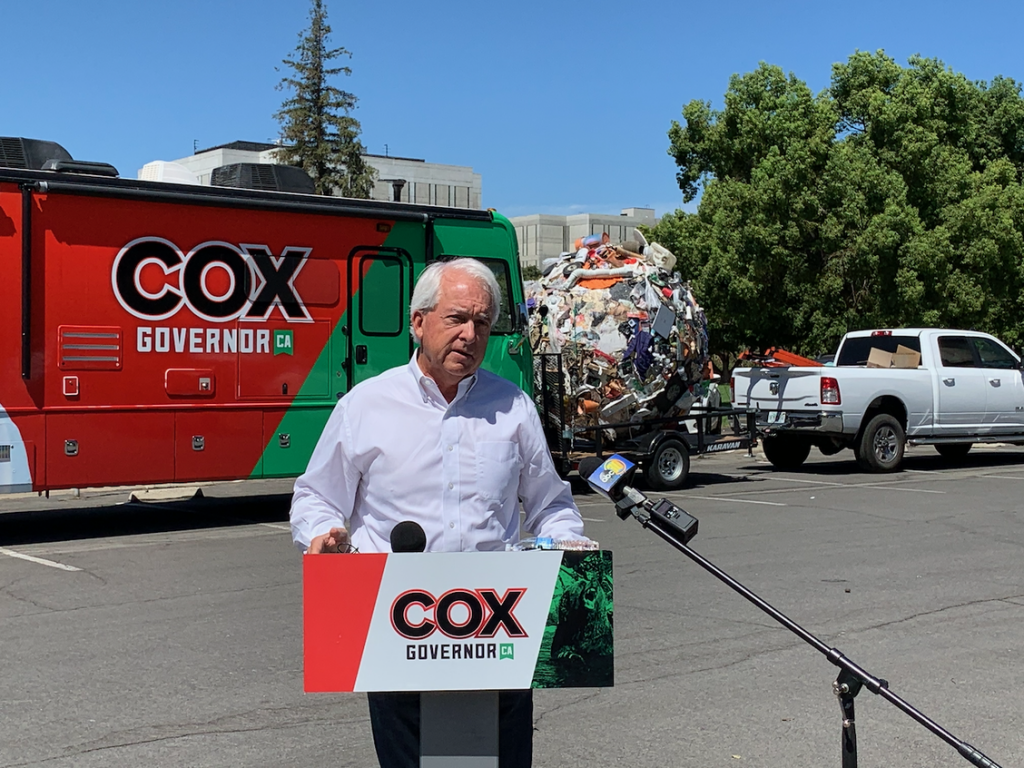 One week after revealing his treatment-first homelessness plan, California gubernatorial candidate John Cox swung through Fresno for the second time in his campaign to address his plan to curb the homelessness crisis in the state.

While giving a campaign speech at Eaton Plaza in downtown Fresno, Cox slammed Gov Gavin Newsom – who is facing a recall on Sep. 14 – for his inability to solve the homelessness crisis.

“The voters have spoken,” Cox said. “We’re going to have a recall, and I think the voters are going to recall Gov. Newsom, not least of which because of his failure with regard to homelessness.”

After starting his recall campaign taking live 1000-pound bear with him around the state to symbolize the “beastly” changes that California needs, Cox brought another show-and-tell piece on Wednesday: an eight-foot ball of trash.

Cox called the trash ball a “demonstrative egg” that symbolizes the trash that people are being forced to live in on the streets.

He made clear that the trash ball is not intended to symbolize the homeless people themselves.

“Living on the streets is no answer. That’s not what a compassionate society does,” Cox said. “We had a bear to demonstrate the beastly changes that we were going to make. We now have a trash ball to show that the trash left behind is unacceptable. It’s just unacceptable. This is a beautiful state, it ought to be kept beautiful and not full of trash.”

First up in Cox’s plan to combat homelessness is to provide a treatment-first approach.

With many homeless people affected by addiction and mental illness, Cox said that simply putting people in hotel rooms does not solve their problems.

“What we should do as a compassionate society, a society that cares, is get treatment for those people, and that’s the first priority of my plan to end homelessness in this state,” Cox said.

Step No. 2 is to enforce the law by practicing “tough love.”

“There’s thousands of people including sadly many veterans on our streets every single day living in filth, living in their own waste in many cases, and that’s not compassionate,” Cox said. “We need to practice tough love. We need to enforce the law.”

His planned third step is to redirect spending from costly projects – such as Project Homekey, which he said he would axe – to various programs that provide services for the homeless.

“Politicians are very happy to spend taxpayer money without much regard for accountability,” Cox said. “When I’m the governor of this state, we’ll have public-private partnerships with literally hundreds of organizations around the state that are doing good work right now in taking people off the street, providing them with treatment they need, providing them with jobs training, providing them the supervision that they need.”

Lastly, Step No. 4 is to lower the housing cost in California to create more affordable options for people at risk of homelessness.

“We need to shorten the time frames for approvals. It now takes 10 to 12 years to get a housing plan approved. I can get that done in Indiana in 6 to 12 months. That’s real cost added to the cost of housing that ends up being paid by the people who have to pay it – the renters and the purchasers of housing.”

Cox pointed to his 40 years of experience in the private sector as the change California needs to move in the right direction.

“California should lead the nation in many, many things. We’ve got the greatest weather, the greatest natural resources, the greatest people, but what we lack is good political leadership. This recall is a chance for us to get change to happen in this state once and for all,” Cox said.

“We’ve tried all kinds of career politicians. We’ve tried celebrities. They haven’t done the job. It’s time to get somebody from the private sector with business experience with the track record of 40 years of delivering results with accountability. That’s a big thing with me and my business.”