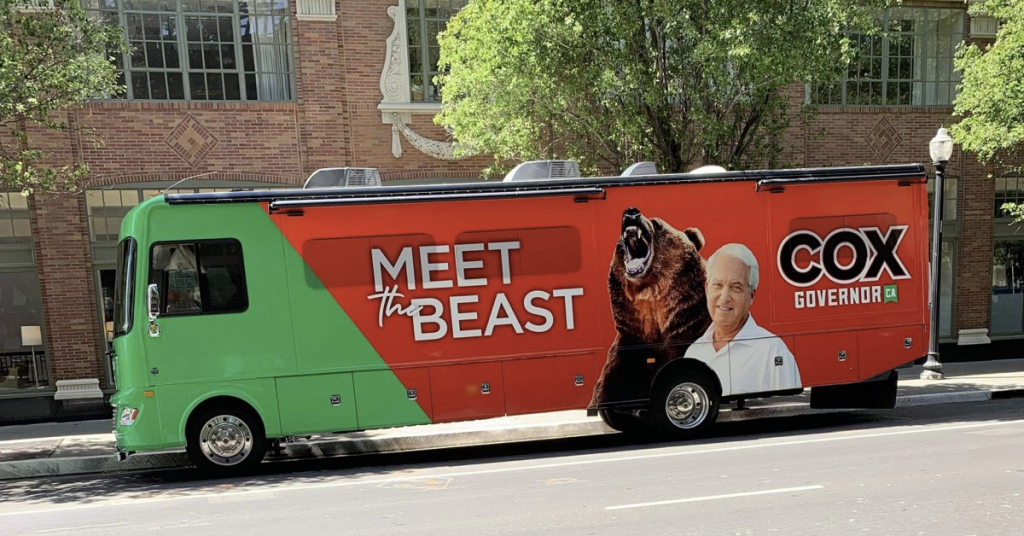 The relaunch comes with an added traveling companion for a statewide tour to begin Tuesday, Cox announced. That companion? A 1,000-pound live bear.

Cox is set to tour the state as part of the “Meet the Beast” tour to provide some much-needed enthusiasm into his second bid for the Golden State’s top job.

The tour begins at a Sacramento regional park on Tuesday morning.

However, the most intriguing stop comes later at the Yountville-based French Laundry restaurant.

The restaurant, famous for its pedigree as a Michelin-starred eatery, became infamous when Gov. Gavin Newsom attended a maskless, in-door birthday dinner for lobbyist and longtime advisor Jason Kinney in Newsom.

Newsom’s attendance violated a number of key edicts and the perceived hypocrisy jumpstarted the then-stagnant recall movement against him.

This appears to be a deliberate campaign strategy, and not an act of vandalism, fwiw. pic.twitter.com/n1MHOjwzRO

Cox shook-up his campaign staff in March, with two senior advisors from his 2018 bid departing the effort.

I can’t bear to wish former clients anything but the best of luck.

In their place, Cox hired flashy GOP ad man Fred Davis along with other GOP consultants to helm his second bid.