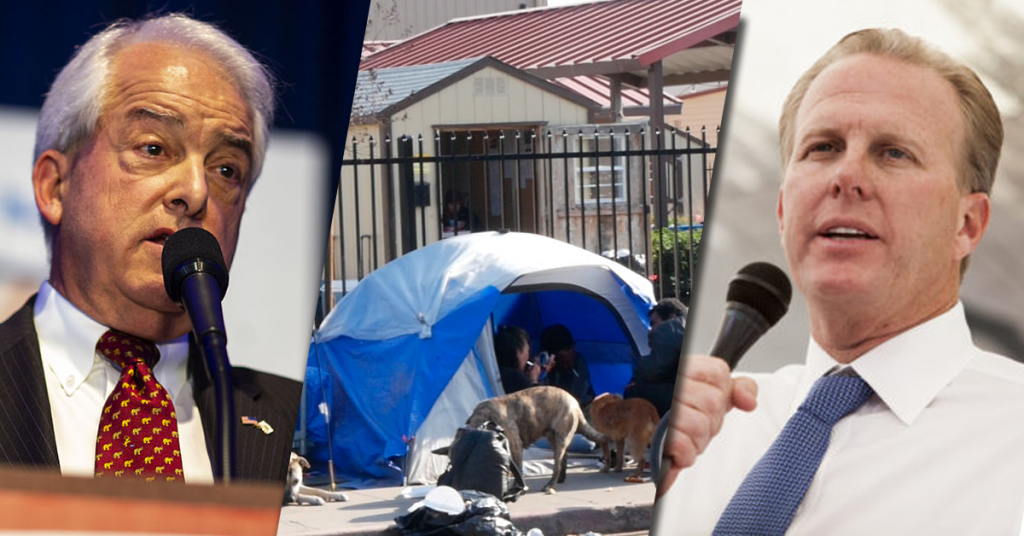 With the recall election of California Gov. Gavin Newsom drawing nearer, the two leading Republican candidates – Kevin Faulconer and John Cox – have revealed their plans to curb the homelessness crisis in the state.

In order to find a solution for the more than 160,000 homeless individuals in the state, both candidates pledge to clean up the homeless encampments that are ever-quickly swallowing the streets of California.

Their plans take two different approaches to meet the end goal, however.

Faulconer is proposing a shelter-first approach to provide housing for those that need it. On the other hand, Cox is pushing to start with a mental health approach in order to treat the root causes of homelessness.

Here’s a look at their plans:

Faulconer’s plan – dubbed “Streets to Shelter” – follows the same shelter-first plan he enacted as the Mayor of San Diego, which he said decreased homelessness in the city by double digits during his two terms in office.

From 2019-2020, near the end of his tenure, homelessness dropped by four percent, according to the San Diego Regional Task Force on the Homeless.

“Gavin Newsom promised to lead with compassion, but he broke that promise and left 161,000 Californians out in the cold. Shattered lives are piling up on our sidewalks, in our emergency rooms, and in our morgues. Newsom is a phony politician whose only concern is saving his own career, not getting homeless Californians the shelter they need,” Faulconer said in a statement.

“My approach to homelessness is based on a simple belief: People are not made to live outdoors. If you condone people living on the streets, you’re condemning them to die on the streets.”

Faulconer’s four-step plan is as follows:

Specifically, Faulconer will enable widespread enforcement of laws against tent encampments by creating the “right to shelter” law, which will guarantee every Californian’s legal right to shelter and mandate the legal obligation for individuals to vacate public spaces if they refuse available shelter.

In addition to the right to shelter, Faulconer will sign an executive order to establish a network of state-led shelters to increase the total number of shelter beds in the state.

In order to clean up California, Faulconer’s administration will devise a law that will establish the public’s right to access public spaces. Faulconer will also sign an executive order that requires adequate maintenance of state property to support the rights of Californians to use public spaces.

Another executive order Faulconer plans to issue will create the Housing California’s Heroes program, which is focussed on housing homeless veterans.

Faulconer’s plan is capped off with an auditing of all state funds used for mental health, drug and alcohol substance abuse programs and homeless services to identify solutions to increase the effectiveness of those programs.

Cox’s plan – playing off the “Beauty and the Beast” refrain that he has been pushing with Newsom – is focused on treatment first.

“Gavin Newsom and the career politicians have spent billions on homelessness on things like $60,000 tents,” Cox said in a San Jose press conference Tuesday. “We are offering a better way. We can get the homeless the help they need – by court order if necessary. We can enforce the laws to get the homeless off the streets. And we can clean up California as a result.”

Similar to Faulconer, Cox is also proposing a four-step plan:

Instead of focusing on right to shelter action, Cox would dedicate funding to treatment programs that rehabilitate homeless individuals before moving them into permanent housing.

Specifically, he would challenge the results of Jones v. City of Los Angeles, which prohibits law enforcement and municipal officials from enforcing the ban on sidewalk encampments in Los Angeles unless the city provides permanent supportive housing.

Cox wants to take it to the Supreme Court of the United States to challenge the definition of “permanent supportive housing” in order to come up with more realistic and cost-effective shelter solutions than are currently allowed.

He would also seek legislation to change Proposition 47, which downgraded certain drug and property crimes and has resulted in “catch and release policing.”

Cox also seeks to amend the 1967 Lanterman-Petris Short Act, which regulates involuntary commitment to psychiatric hospitals. He says the act prevents people from getting the help that they need, which results in packed prisons and emergency rooms.

To better focus state funding, Cox would shift much of the funding for shelter programs, such as Project Homekey, to instead fund treatment and behavioral health programs, which he says will yield far better results while saving the taxpayers money.

His last step, lowering the cost of housing, is a three pronged solution: