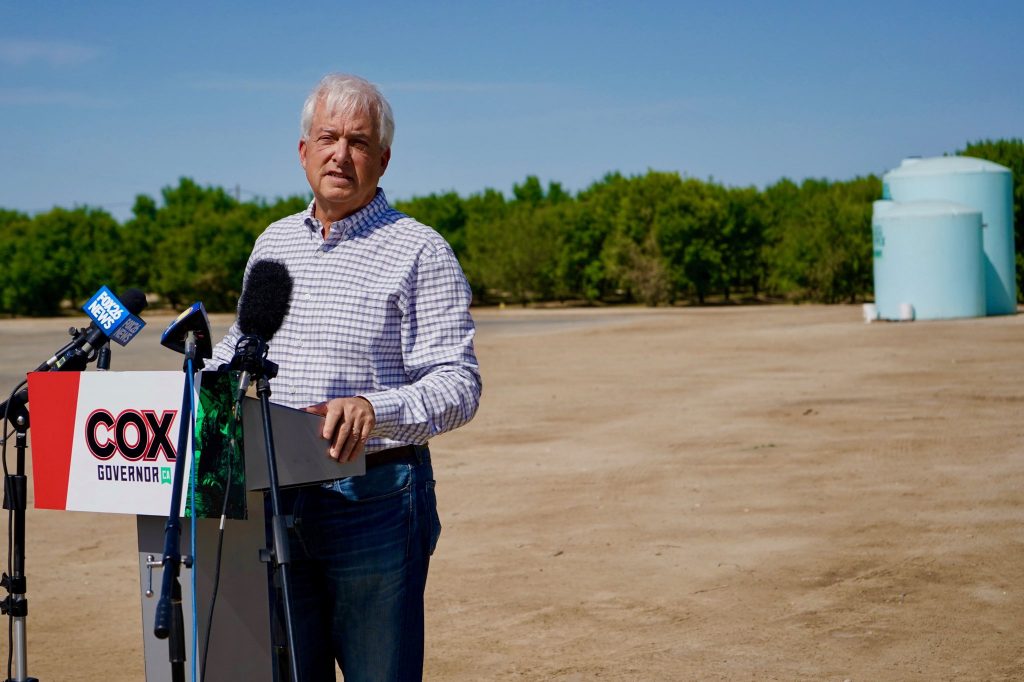 California gubernatorial candidate John Cox swung through Fresno on Thursday as part of his “Meet the Beast” campaign tour, holding a press conference at Machado Farms.

Although the 1,000-pound bear was not on site at the southwest Fresno farm, Cox played off the “Beauty and the Beast” plenty, going after Gov. Gavin Newsom – who he lost to by nearly 24 points in 2018 – for being a “pretty boy governor” who lives a life detached from common Californians.

“Our beautiful, pretty governor goes to the French Laundry restaurant and has dinner with lobbyists – his real bosses – in violation of his own rules, and this becomes a national and international story,” Cox said. “Why? Because he broke his own rules to go to dinner with lobbyists. It wasn’t his birthday, it was the lobbyist’s birthday. They had a $12,000 wine bill, and he put the lobbyist over the people of this state.”

“We’ve got a choice in this election,” Cox said. “This recall has given us a chance to really have a dialogue and really focus on bringing this state forward, making sure that it works for everybody, not just for the rich and connected. We’ve got a choice: It’s the beauty or the beast. We’ve seen what the beauty has done. I think it’s time we unleash the beast.”

When it comes to local issues that affect Fresno and the Central Valley as a whole, Cox sees himself as uniquely qualified because his mother retired and moved to Fresno for the last 20 years of her life, and his younger brother is a small businessman in town.

With the state once again in the midst of another drought, Cox said he would do something that Newsom has so far refused to: declare a state-wide emergency.

Instead of a state-wide declaration, Newsom enacted an emergency in Mendocino and Sonoma Counties.

Cox also suggested that California should divert money from the over-budget and routinely-delayed High-Speed Rail – referring to it as the “train to nowhere” – to fund water projects, such as the Friant-Kern Canal.

“California wouldn’t exist in its form today without water,” Cox said. “We have historically had droughts. We’re in a drought right now. The water table’s at least 100 feet lower than it normally would be. But it’s the result of man-made decisions, government-led decision that have resulted in our water problems in California today.”

Cox added, “We can build reservoirs, and we still protect the fish. We can desalinate and provide drinking water for the burgeoning populations around the coast and make sure the reservoirs are there for the dairy farmers and the cattle farmers and the people who have staked their lives on having a future in farming and agriculture.”

The gubernatorial candidate also addressed several other issues facing the state, such as homelessness and energy.

He would like to see people with addictions and mental illnesses receive the proper treatment, saying that’s “how you solve that problem.”

For energy, Cox said he wants to diversify California’s sources with natural gas and nuclear. In turn, he argued that the state could ship its natural gas to China and India to compete with coal production in those regions and combat pollution.

Cox’s path to a recall victory will not be a clear one. Even though he was the Republican’s choice three years ago, former San Diego Mayor Kevin Faulconer has stepped in as one of the GOP’s leading contenders. Cox also faces a celebrity challenger in Caitlyn Jenner and, and former Democratic Los Angeles Mayor Antonio Vollaraigosa could make another bid at the governorship.

“This race is going to be about the beauty – who’s in government right now, our governor – and the beast. We’ve had career politicians like Mr. Faulconer, we’ve had celebrities like Ms. Jenner – they haven’t done the job,” Cox said.

“I’m suggesting it’s time to have a business guy, someone who’s delivered results, who has managed people, who’s recruited strong leaders to work alongside him, set goals, make sure we hold people accountable to meet those goals and deliver results. That’s what I’ve done in the private sector for 40 years. That’s what we need in Sacramento, no question about it.”