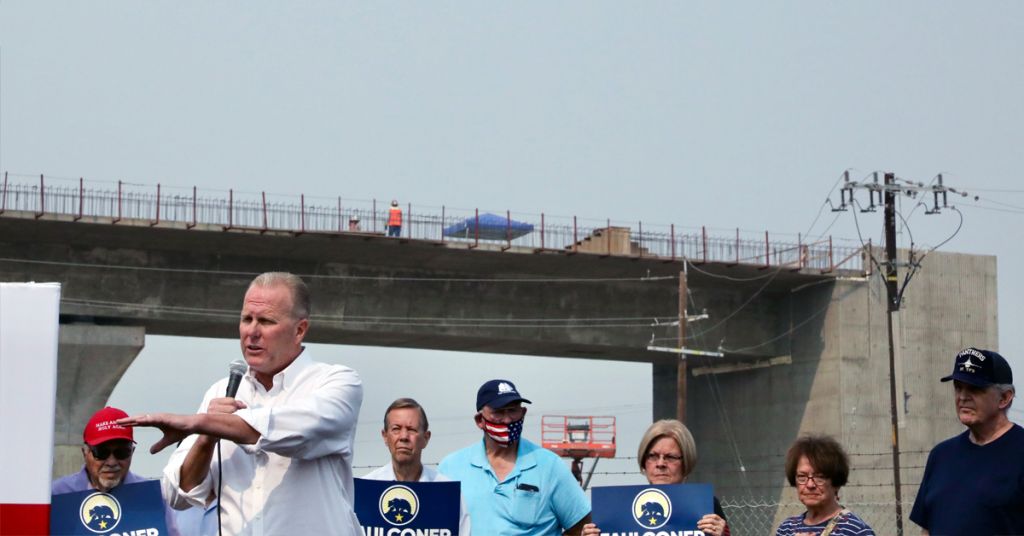 With a thick layer of smoke from the Dixie Fire lingering above, Former San Diego Mayor Kevin Faulconer launched his statewide California Comeback Tour deep in the heart of industrialtown Fresno on Thursday morning.

The region, beset by high unemployment, few water resources to sustain its robust agriculture industry, has little to show for the love claimed by Newsom, Faulconer argued.

Faulconer’s stop underscored a succinct axiom of Newsom’s stance on the region: “I visited Fresno and all they got was a lousy train-to-nowhere.”

With thousands of jobs and billions tied up in high-speed dreams, where would Faulconer send the money, personnel, and energy?

In the midst of an historic drought, the answer is plain as day: water infrastructure.

“Instead of building trains to nowhere, we will build additional reservoirs,” Faulconer said during his stop. “We will make sure that farmers understand that they will have the help, the support, and the water resources that they need to be successful.”

Faulconer, who is expected to traverse much of the state in the coming days, is rallying support on the multitude of fronts affecting Californians: crime, homelessness, the cost of living, and the ever-growing impacts of wildfires.

“It’s time for a Governor that’s actually going to get results on the issues that matter to California.”

The former San Diego Mayor has pushed twin critiques of the radio host. His first issue? Comments Elder made about the intelligence of women in a 2000 column for Capitalism magazine and support for pregnancy discrimination in the workplace.

“You cannot discriminate against women in the workplace. It’s wrong, it’s unconscionable. Anyone who believes that is wrong,” Faulconer charged.

Faulconer noted that Elder’s comments are far out-of-step with the reality of California’s families.

“Most families in California, both the father and the mom works – works to make ends meet,” Faulconer said. “Why? Because it’s so expensive.”

The other critique? Elder’s intransigence toward confronting the media and voters in a debate setting.

Elder has stood firm that he won’t participate in any debate unless it’s one-on-one with Newsom.

“What’s he afraid of? What’s he hiding?” Faulconer mused.

“Californians expect you to come talk about what you believe in. Stand up and defend that.”