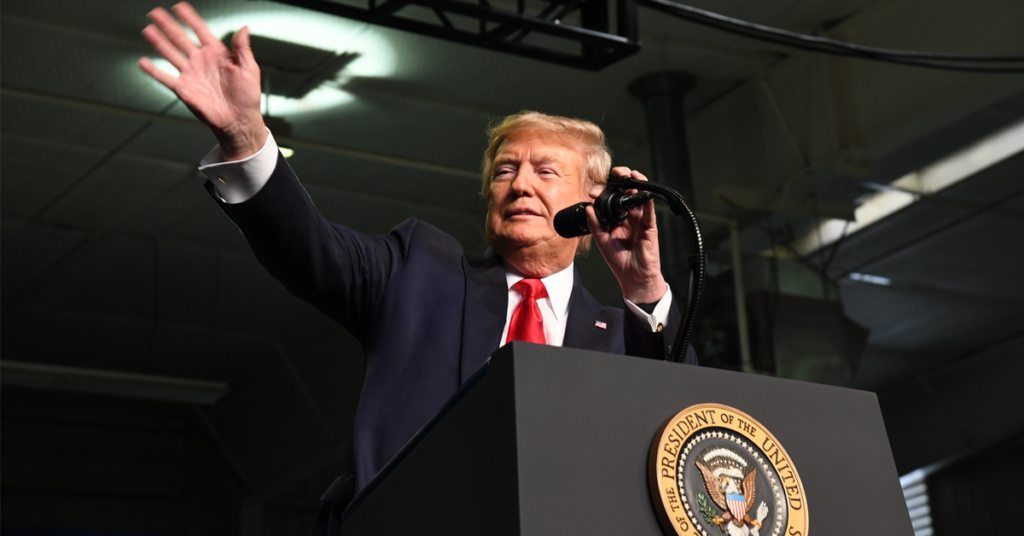 BAKERSFIELD, CALIF. – “You can’t always get what you want, but if you try sometimes – well – you might find you get what you need.”

As The Rolling Stones classic rang in an airplane hangar here, President Donald Trump departed – claiming a key victory in one of the loneliest regions of the Golden State.

It was also an anthem to the decade-long movement to end water diversions to the Pacific Ocean and send more of the precious resource through the Sacramento-San Joaquin Delta to communities and farmers in the San Joaquin Valley.

“For too long water authorities have flushed millions of gallons into the Pacific,” Trump said to an assembled crowd of 3,000 Valley farmers and residents. “I ordered the administration to update outdated opinions which determined water allocation in this state.”

They would join Trump as he signed a memorandum, charting a new chapter in the Federal government’s work on California water issues.

SEE RELATED: Trump celebrated a big boost in water for the Valley. But what did he sign?

Focus on the farmers

“Water for us, is everything,” Starrh said, launching into an animated address. “Water is the beginning, it’s the middle, and the end. Without it, we have nothing – it’s just the end.”

As he concluded, Trump remarked that Starrh could have his own political career following his impassioned speech.

Holterman, meanwhile, focused on the decline of the family farm generation-to-generation.

“Because of the uncertainty of water deliveries, I’m worried that we may not have a family farm to pass down to my children, my niece or my nephew,” Holterman said of the current water situation.

“Using new science and technology, almond farmers today use 33 percent less water than they did 20 years ago,” she noted. “Our water infrastructure should handled the same way, using updated science and new infras

“You’re incredible people,” Trump told the crowd to a roar. “You work so hard, and you’re smart as hell.”

A challenge in the form of Newsom

At the crux of the Trump administration’s moves to send additional water to the Valley is the complicated relationship between the Federal government and the State of California.

Yet, Newsom, while mollifying environmental groups in vehement opposition to the new biological opinions, is still attempting to thread a needle to keep major water users at the table to negotiate a resolution to environmental concerns in the Delta.

“Our goal continues to be to realize enforceable voluntary agreements that provide the best immediate protection for Delta species, reliable and safe drinking water, and dependable water sources for our farmers for economic prosperity,” Newsom said as part of the lawsuit threat. “This is the best path forward to sustain our communities, our environment and our economy.”

At the beginning of February, Newsom threw his support behind a framework of so-called voluntary agreements between state and federal water agencies, water districts and other users, and environmental groups to determine Delta water flows and methods for restoring fish populations in the Delta.

The voluntary agreements would require water users to cough up $5 billion for environmental work and habitat restoration and sacrifice 800,000 to 900,000 acre-feet of water.

Since October, when Newsom first announced a possible lawsuit against the Feds over the biological opinions, officials with the Department of Interior have maintained a fairly confident posture.

During a water forum in Tulare on Tuesday, Bernhardt maintained that the opinions were “grounded in reliable science,” translating to them being legally defensible.

“Would a rational personal want to jeopardize the water supply for 25 million people without being really confident about what they read?” Bernhardt then asked.