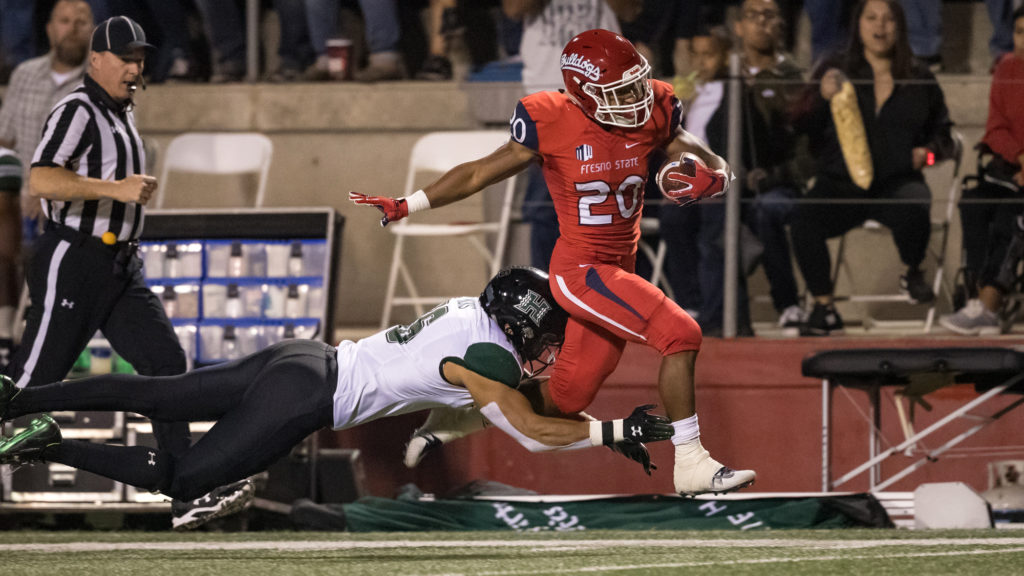 San Diego State’s calling card is its run defense, but Fresno State has hit its stride in the run game, fixing the early-season woes and is prepared to throw everything at the Aztecs as a berth in the Mountain West Championship game is on the line.

Good thing for Fresno State, starting running back Ronnie Rivers is on a roll. The junior has three-straight games with over 100 rushing yards, the first time in his career, and he has scored at least 2 touchdowns in four consecutive games.

“It’s just a great feeling being able to see hard work pay off,” Rivers said. “O-line’s been doing a great job up front controlling the line of scrimmage, and receivers on the perimeter block too as well as Jorge [Reyna] carrying out RPO’s [run-pass option].”

The running game as a whole struggled to pick up yards in the first half of the season, outside of wide receiver Jalen Cropper on the fly sweep. Now, Rivers has overtaken opposing defenses and isn’t letting up.

What’s most impressive about this run, however, is that the offensive line isn’t at full strength and has taken a hit every week. Three starters were already out before last week’s game against Utah State, and more lineman suffered injuries against the Aggies, making the outlook for the final stretch of the season uncertain.

Offensive coordinator Ryan Grubb has often preached to the linemen to be ready to step up, fill in and help in any capacity they can, and now it’s paying off.

“When you’re short handed, which we are, and guys are repping two different spots, they’re learning two positions for [the] gameplan,” Grubb said. “But they’re up for it, and they’ll continue to prep for it and be ready.”

Rivers added, “It just shows the grit they have, they’re mentality of that next guy up regardless of what happens – just whoever’s up next being able to work hard and do their job just as well as the first guy and being able to control the line of scrimmage.”

The offensive line has its toughest challenge of the year against San Diego State and the No. 2 run defense in the nation. Opening holes for Rivers and fellow running back Josh Hokit won’t be easy.

The Aztecs have only given up 5 touchdowns on the ground all season, including one in each of their two losses. If the Bulldogs can find a way to score on the ground, they’ll be able to eliminate the Aztecs’ greatest strength.

Grubb said San Diego State’s defense is very similar to Arizona State’s, which Rivers had a career-day against in the Las Vegas Bowl last season – 212 yards and 2 touchdowns. Also, the Aztecs’ defense hasn’t changed since Grubb and head coach Jeff Tedford came to Fresno State in 2017, so the Bulldogs have familiarity and experience to draw on.

Rivers sat out the 2017 game with an injury, but he did total 78 yards and a touchdown against the Aztecs last year, so he clearly isn’t fazed by the challenge. Back in 2017, Hokit had 77 yards and 3 touchdowns on the ground to go along with 112 yards from running back Jordan Mims, who’s currently out for the season with an injury.

Fresno State knows how to attack this defense, probably better than any other team in the Mountain West.

“It’s an unbelievable task, and you’ve just got to get the guys’ minds around it initially and what they have to do identifying people and staying on track and being disciplined,” Grubb said. “That’s really what it comes down to, because it’s extremely difficult to run the ball. But at the same time, you can’t go into a football game like this and expect to flip it around on them, because with their pressure package you just won’t be able to do that.”