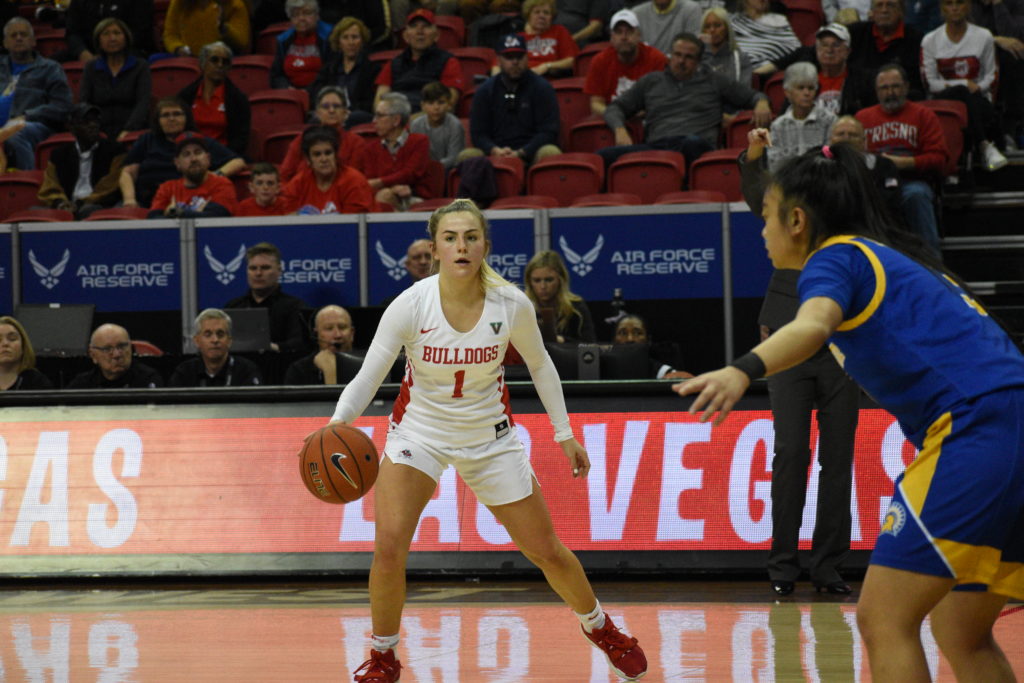 In the biggest moment of the season, the Fresno State women’s basketball team stepped up to the challenge and played better than ever, beating San Jose State 94-68 at the Thomas & Mack Center in Las Vegas.

After taking care of business against Nevada on Monday, the Bulldogs faced a tough challenge against the Spartans in the semifinals. Although Fresno State won the previous two meetings in the regular season, they were both tightly contested contests. That wasn’t the case Tuesday.

“I thought our kids were really ready to play, focused,” said head coach Jaime White. “Knocked down big shots, drew fouls, got to the free-throw line.”

The first four minutes were back and forth as each team had a solid start. San Jose State held a 9-8 lead at that point, but then Fresno State caught fire behind the play of forward Maddi Utti and guard Haley Cavinder.

Fresno State went on a 20-2 run to close out the quarter. The Bulldogs played better than they have all year, dominating on both ends of the floor.

“That felt good,” White said. “As a coach, you’re like, ‘OK, what are we going to do next quarter?’ I felt like against a team like that, to feel comfortable at all, you would need to have a lead. And in my mind, I thought, ‘OK, if we can go in the locker room with a 20-point lead, we can regroup and work on some things and get better in the second half.’”

Utti was a perfect 4-4 in the first quarter and made both of her free-throw attempts as she paced the Bulldogs with 11 points. Cavinder sunk three shots from beyond the three-point arc to add 9 points.

Given the circumstances – a rivalry matchup with a chance to head to the championship game – Fresno State’s run of good form could not have come at a better time.

Fresno State finished the first quarter with a 28-11 lead, and the game was effectively over.

The Spartans stepped up their effort in the second quarter, particularly on the defensive end, but they were unable to gain any ground on Fresno State.

Coming out of the locker room after halftime, the Bulldogs continued to pile on en route to their 26-point victory.

The Bulldogs led by as much as 36 in the fourth quarter, and although the Spartans managed to go on a 12-0 run near the end, it was too little, too late.

Utti was the best player on the court. She finished with 22 points, 15 rebounds, 6 assists, 2 steals and 1 block.

Guard Aly Gamez tied Utti for the scoring lead with 22 of her own. Cavinder was right behind with 18 points 7 rebounds and 7 assists, and twin sister Hanna Cavinder added 14 points.

“I think it starts with chemistry,” Gamez said. “It starts in practice. We’ve been together all year, so bonding together and knowing where everyone’s going to be, knowing everyone’s strengths and weaknesses.”

San Jose State guard Ayzhiana Basallo – the leading scorer in the Mountain West – once again struggled against the Bulldogs, managing 12 points on 3-9 shooting.

Forward Tyra Whitehead led the Spartans with 16 points, but she wasn’t nearly as dominant or effective as she was the previous time the two teams met.

Now the Bulldogs head into the championship game Wednesday at 8 p.m. against either Boise State.

Broncos were sitting in the stands watching the Bulldogs dominate. They saw a team that is poised to capture the tournament title and earn the Mountain West’s automatic bid to the NCAA Tournament.

“It’s such a special game,” White said. “Not a lot of people in the country get to be in championship games, and I think we always grow as we test ourselves. So it will be a challenge, but if we come together, I think all things work out.”