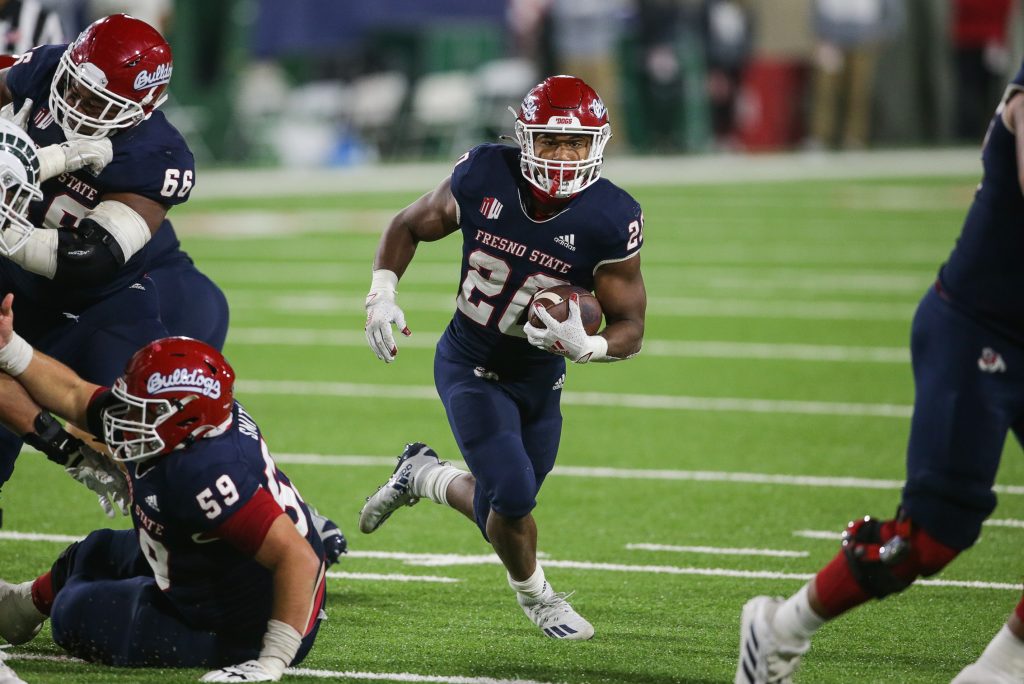 Behind the legs of Ronnie Rivers and a stout defense, Fresno State overcame its issues from a poor Week 1 loss to beat Colorado State 38-17, picking up the first win under head coach Kalen DeBoer.

Facing the prospect of a short week and a fresh team on the other sideline didn’t deter the Bulldogs Thursday. Rivers, the senior running back, was sharp from the get-go and carried the ‘Dogs to victory, making an impact as a dual-threat out of the backfield.

After last week’s loss to Hawaii in which quarterback Jake Haener struggled and threw 3 interceptions, DeBoer said part of Haener’s mistakes included not checking down to Rivers and the other running backs enough.

“[Haener] puts enough pressure on himself, but we also made sure he understood, ‘You’ve got to get this done.’ He really stayed in there and stepped up in a great way this week,” DeBoer said. “Just like the rest of the team, he never flinched. He never whimpered. He just stayed the course and got better, and that’s all we can ask, is for him to do everything he can to be the best he can be.”

“That guy’s a best, and I think the big thing the coaching staff did a nice job of this week is finding other ways to get him touches,” DeBoer said. “You saw it in the pass game coming out of the backfield.

While Haener utilized the running backs much more effectively than last week, he also played a near-perfect game. Haener was 22-32 for 311 yards and 3 touchdowns. He also did not throw an interception.

Haener also looked far more comfortable in the pocket against the Rams and came up with several big plays, such as a 34-yard pass to wide receiver Josh Kelly when the Bulldogs were backed up on their own 9-yard line facing 3rd and 10 late in the first half.

That conversion kicked off a 10-play, 91-yard drive that ended with a Mims touchdown reception to put the ‘Dogs up by 14 heading into halftime.

DeBoer also pushed the team with his aggressive decisions, converting two fourth-down attempts, both of which came on drives that resulted in touchdowns – one in the 2nd quarter when the game was tied at 10 and the other in the 3rd quarter.

It was an aggressive and confident showing in all aspects of the game, something that Fresno State lacked last week when the ‘Dogs lost by 15.

“I wasn’t sure what we were going to get walking into the team meeting on Sunday, but it took me about a split-second to realize what this team really wants,” DeBoero said. “They really want it bad, and they really want it bad. They’ve shown that. I knew we were hurting after last week’s first week loss, but they came out on Monday with some energy and some focus, and I knew right then that we had a chance to make a big step from Week 1 to Week 2.”

Defensively, Fresno State was spot-on all night – another huge improvement from Week 1. Although the ‘Dogs allowed 17 points, one of those Colorado State touchdowns came in garbage time with less than a minute remaining and the second-string on the field.

Even though the Bulldogs were tasked with facing a dual-threat quarterback for the second-consecutive week, Fresno State tightened up after the first quarter, allowing the Rams to pick up only 240 yards of total offense after garnering 141 in the 1st quarter alone.

Colorado State quarterback only completed 10 passes out of 232 attempts and added 89 yards on the ground, although 56 of those came in the first quarter.

“We took it upon ourselves to make a change,” said safety Evan Williams. “Our D-line and our linebackers, give all they props to them. They got down in the trenches and got the job done today. Everybody was really locked in.”

It was a total rebound from last week, giving DeBoer a game to remember and showing Fresno State fans what this team is capable of.