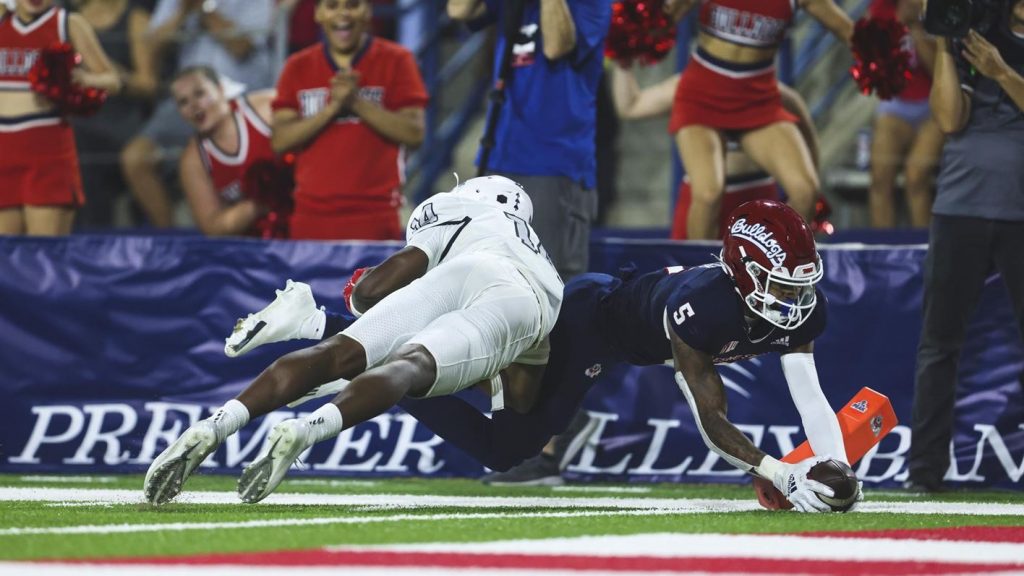 Less than a year after the pandemic-shortened 2020 season kicked off with a home loss to Hawaii, Fresno State is set to meet the Rainbow Warriors with both teams headed in different directions.

Last year’s delays pushed the season-opener back to late October, and the Bulldogs only had three weeks of fall camp to prepare for the first game under Head Coach Kalen DeBoer.

The Bulldogs lost 34-19 and quarterback Jake Haener threw 3 interceptions in his first action at Bulldog Stadium.

Nearly one year later, DeBoer and Haener are riding high as the ‘Dogs have moved up to No. 18 in the Associated Press Poll after improving to 4-1 on the season.

Hawaii, on the other hand, will enter the rivalry game with a 2-3 record and no fans in the stands due to local COVID-19 restrictions.

It won’t even be played on the same field that the ‘Dogs are used to in Honolulu.

Aloha Stadium is no longer in play as the Rainbow Warriors have temporarily moved to their on-campus practice facility – Clarence T.C. Ching Athletics Complex – which now houses 9,000 seats that will not be filled.

“It’s probably going to be eerie going back to the same feelings we had a year ago,” DeBoer said. “We’ve had such electric atmospheres really at every game, so this is going to be considerably different. We need to have a great week of preparation, because over many years of coaching, preparation breeds confidence and confidence brings on the energy that is deep. It can’t be this fake energy that all of a sudden comes to life Friday afternoon or Saturday morning. It’s got to be something that’s built up throughout the week because you put in a lot of work, and it was good solid practices and preparation you have.”

Saturday’s rivalry game presents a quick turnaround for the Bulldogs. The team will fly to Hawaii on Friday and have to deal with the COVID-19 rules that the state has in place.

“There’s a lot of logistical things with COVID – just having to get into the state and having to get into the stadium is two different processes we’ve got to go through,” DeBoer said. “We’re back to eating meals out of boxed lunches and things like that when we get over there. So we’re not going to spend a lot of time over there because the preparation we can do in our own facilities is much more efficient, much better. There’s going to be the time change, there’s going to be some of those things, but we’ll adjust.”

The State of Hawaii is requiring all travelers to submit their COVID-19 vaccination records in order to gain entry without having to quarantine for 10 days.

Outside of that, the Bulldogs will have to jump through more hoops just to simply enter the stadium.

The University of Hawaii is requiring each player to create an account with its self-screening platform LumiSight UH. The players will upload their vaccination information and will also be required to submit a health check on Saturday.

After Haener was honored as the conference’s top player last week, wide receiver Jalen Cropper was named as the Mountain West Offensive Player of the Week following his 4 touchdown performance against UNLV.

Cropper finished the 38-30 win over the Rebels with 10 receptions for 108 yards to go along with his touchdowns and is tied for first in the nation with 8 touchdowns on the year.

DeBoer credited Cropper’s success and improvement over last year to his work in the weight room over the winter.

“There’s just a real good confidence and calm about him, poise about him, and it comes through working extremely hard,” DeBoer said. “He was voted the hardest worker, No. 1 guy during the winter workouts that we had. There’s a reason why he’s had the success he’s had.”

DeBoer noted that the distractions that surrounded the team after the UCLA win have died down.

“I think now we’re back into a good groove where there’s already less attention,” DeBoer said. “I can just tell you going through yesterday and today there’s less attention on our guys, there’s not as many distractions and things, interviews that they’ve had to do to where we’re back in a normal routine. And I don’t think getting caught up is the way to express it, but there’s just obligations that guys have to do a lot of interviews, and it just takes away time from your preparation.”

But if Haener keeps playing at a high level, one storyline may dominate the season: Haener’s candidacy for the Heisman Trophy.

Former Heisman winner Robert Griffin III is promoting Haener as one of his top five Heisman candidates at this point in the season.

The discussion comes as Haener leads the nation with 1,842 passing yards and is tied for second with 15 touchdown passes.

When asked about Haener’s Heisman candidacy, DeBoer pointed to his quarterback’s daily preparation and the fact that he is a leader on a winning team.

“Well I think there’s the wins, right? You’ve got to win football games if you’re going to be considered in that realm, in that category. He’s a leader. He’s won football games in big ways. Obviously the stats are something that really draw your attention to what he’s accomplished during this year. It is kind of crazy to think how just consistently week in and week out he’s been overall. Not just this year, it goes back to last year too,” DeBoer said.

“That just tells you how truly talented he is, how talented of a football team we do have. We know we’re going to face someone that probably finds a wrinkle here and there that can slow us down that we’ve got to be ready for. Jake, he just brings it. His preparation and what he puts into it is a big reason for his success, not just the talent and the group around him. As long as he does that and keeps staying the course with his preparation, the sky is the limit for him and more great things are going to happen throughout the year.”