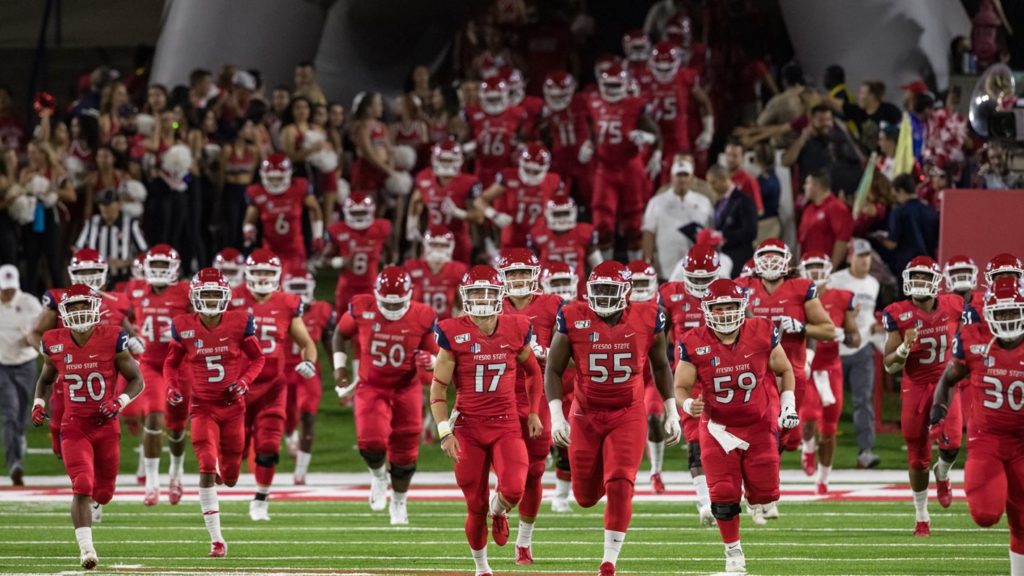 The Bulldogs received some unfortunate news Monday: head coach Jeff Tedford announced center Matt Smith is out for the season.

Smith broke his fibula during Fresno State’s 41-38 win over Hawaii last Saturday. He left the game in the second quarter and was replaced by redshirt freshman Tyrone Sampson.

“He’s not only been a good player for us, but he’s been a real team leader for us,” Tedford said. “He’s an emotional leader for our team, probably one of the most respected guys on our football team. He’ll be missed not just as a player, but as a person. I’m sure he’ll be around and continue to provide emotional support for the team. He’s a great young man. It’s always hard to see anybody go down like that.”

The injury puts the ‘Dogs down three starting offensive linemen. Left guard and team captain Netane Muti played in three games before going down with a Lisfranc injury, and left tackle Dontae Bull is day-to-day, Tedford said. Bull didn’t play against Hawaii, and Tedford wasn’t sure if he’ll be available for the Utah State game.

Sampson was a four-star recruit coming from Detroit and was rated as one of the top centers nationally in his class.

Tedford said Sampson was dealing with some injuries throughout the summer and fall camp, but it looks like he’s good to go now.

“He’s been improving,” Tedford said. “When you’re fighting through injury, you’re not at your best every day, so I think he’s closer to 100 percent now. Obviously now it’s his turn.”

Smith filled in for Muti as team captain, and Tedford said he’ll make a decision this week for who will fill the captain spot in Smith’s absence.

“I think coach Grubb and coach Sapolu do a good job of making sure that we rep guys. There are different combinations that we have to work every single week because you never know what’s going to happen in a game. So it’s important to get guys reps at certain positions, not just one position, you have to have a tackle go to guard, and somebody play center, because you have to be prepared for anything that goes on in the game. So the different combinations, we’ve had quite a few of them, and I think the offensive line coaches have done a nice job of making sure guys are prepared and ready to go.”

On the Hawaii win:

“It was up and down, great football game. Really proud of our kids and our staff to hang in there, keep competing through all the ups and downs. We always talk about ebbs and flows in football games and how that goes, and it was never more evident than the other night. Really proud of the team, the focus that they kept through. It’s a long trip over there, a day ahead of time and to keep the focus and continuing to believe and keep playing, keep competing. It was nice to come away with a win.”

On Utah State, the ‘Dogs’ next opponent:

“Really good football team. As we’re getting into them today, understanding that they played Air Force [31-7 loss], and Air Force has really kind of shown to be able to do that to most people. So you’ve got to kind of throw that one out the book, and BYU’s a really good football team. They’ve also had some big wins, beat San Diego State, Colorado State, Nevada. They played Wake Forest really tough in the beginning of the year. They’re a quality football team, all the way around. Have a great quarterback who’s in the top three in a lot of categories in the offense, total offense and passing and so a lot of talent on their team and very well coached. So we’re going to have our hands full. We’re getting into them today, a little bit last night, a little bit this morning, but it shows that they’re a talented football team.”

On his thoughts on the coaching staff after the win:

“I thought the staff did a great job, not just through the x’s and o’s piece of football, because when you travel there on a Thursday there’s a lot of meetings because you want to keep the kids occupied and busy. So there’s a lot of meetings that go on and a lot of organization that goes on. I told the team yesterday that I was proud of the way that they traveled, proud of the way that they kept their focus the two days there – and went into the game very focused, but that doesn’t happen alone. The coaches have a lot to do with that as well. It’s not just what you do on this play, but it’s about the mindset of how you go into each meeting and how you show up on time and the mindset that you take into the game, so I thought the staff did a great job.”

“He’s a gifted kid. The game doesn’t move too fast for him. He plays at a high level. He plays fast, very strong competitor. And I think each week he just continues to learn like all the young guys out there. We’re full of them at that position. You’ve got Emoryie Edwards, you got [Jamal] Glaspie, you have [Keric] Wheatfall when he was healthy. We’re so young at certain positions, offensive line, some guys in the secondary, linebackers – each week though is a learning experience for everybody, but Jalen plays very fast and coach [Kirby] Moore does a nice job of coaching him to understand what we’re doing offensively. He’s got his assignments down and knows what’s going on.”