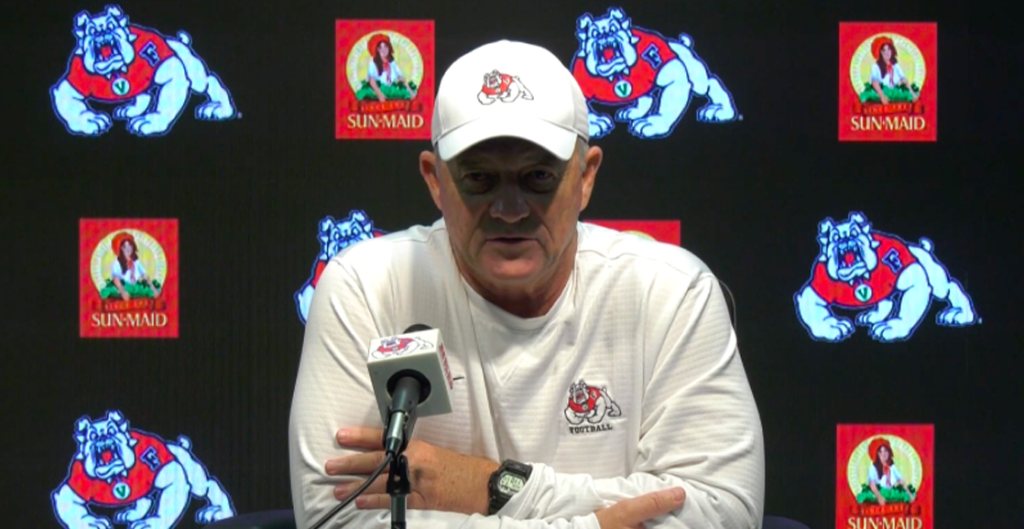 It’s “on to Cincinnati,” or rather an “on to Boise State” type of week for Fresno State after a stunning loss at UConn last Saturday.

Head Coach Jeff Tedford didn’t invoke Bill Belichick’s famous “on to Cincinnati” line at his Monday press conference, but he said the team watched the film from the 19-14 loss on Sunday and quickly transitioned the focus to Boise State the same day.

“I find the easiest way to kind of move forward is to get on to the next opponent,” Tedford said. “Yesterday we spent time watching that to learn, and then got a jump on Boise yesterday.”

At 1-3, a far cry from the preseason expectations and hype that surrounded the program, the Bulldogs are desperate for a fresh start.

They’ll get one as they open up conference play on Saturday as Fresno State’s record is wiped clean as far as the Mountain West is concerned.

But moving on to Boise State is easier said than done as the Red Wave is left wondering how the team fell so far so fast.

“I completely understand the disappointment. No one’s more disappointed than us. I know our fans are very passionate about what we do. Unfortunately we’re running into a little adversity right now, but that happens in life sometimes and we need to turn that into resiliency. We’re going to keep battling,” Tedford said.

“Now we start conference play – really stiff test going to Boise, obviously, very hostile environment there against a very good football team. So we’ve got to keep plugging away and keep working and find a way to come out on top.

“So I totally get it. I totally get the disappointment, and like I said there’s no one more disappointed than us. We’ve had two games get away at the very end in the last minute, so we’ve got to find a way to win those games.”

Injuries were an obvious factor in last week’s dismal showing, but Tedford’s health update for his missing players did not sound positive on Monday.

Tedford said it will probably be at least a week or two before some of those key contributors start returning to the field.

Although Fife struggled against UConn, Tedford said he did not feel like the game warranted putting third-string quarterback Jaylen Henderson in.

“They’ll both practice through the week like they did last week, and we’ll see how the game plan shakes out,” Tedford said. “But every week both of them get fairly equal reps just because we need to make sure that the backup’s ready to go as well, whoever that may be. But Logan is the starter right now.”

Boise State enters the game at 3-2, including two Mountain West victories against New Mexico in Week 2 and San Diego State last Saturday, a game in which the Broncos were down 13-0 entering the fourth quarter and stormed back for a 35-13 victory.