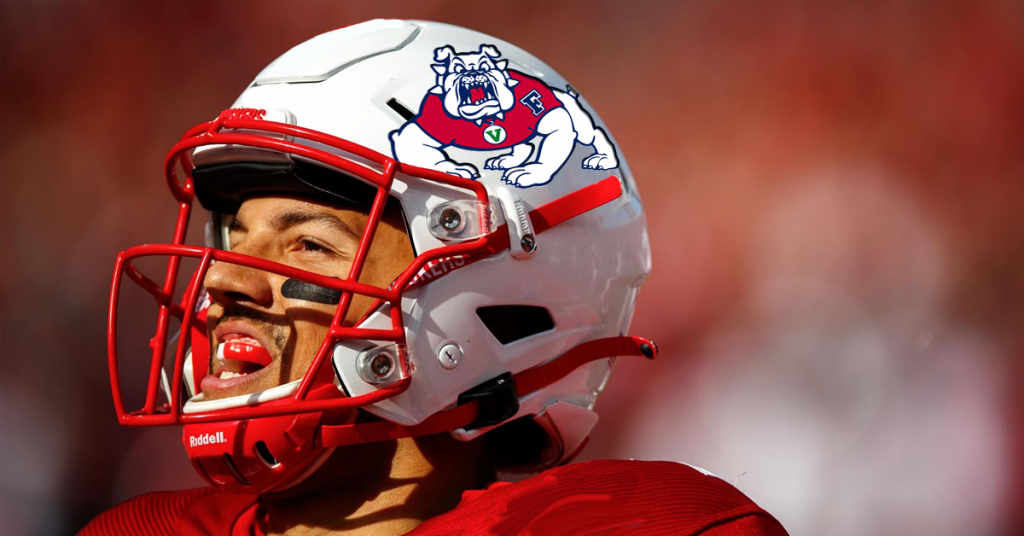 Sure feels like an eternity ago with the now ex-Fresno State quarterback’s Tuesday decision to leave the program and undoubtedly follow ex-head coach Kalen DeBoer to Washington.

Haener was not only the most popular man in town after his late-game heroics to help the ‘Dogs take down No. 13 UCLA in September, but he was also the darling of the national media with his flair for the dramatic hobbling around the Rose Bowl.

While the path from hero to villain was as fast as has ever been seen in Fresno, Haener certainly doesn’t deserve all the hate directed toward him on social media.

This hate was redoubled on Thursday morning when distasteful signs appeared on campus referring to him a traitor.

Ultimately, he’s making the decision that he feels is best for him.

Fresno State fans don’t have to support him in that, not in the slightest, but the attacks are uncalled for.

Haener broke his silence with a message he posted on social media Thursday to the Red Wave, which reads as follows:

“When you dream of playing college football as a kid, you dream of the great games, relationships, and memories you will make along the journey. This journey has been nothing short of surreal and filled with adversity. As I look back, I can not even begin to thank Fresno State enough. My teammates, the Red Wave and entire Valley have treated my family and I with the utmost respect and support. The decision I’m making has been the hardest of my life, truly. My greatest memories have been made as a Bulldog and the people I’ve met here will forever be close to me. I gave my heart to this Valley and I want everyone to know this place will always be special to me.

“Thank you for everything Red Wave. It’s been a pleasure.”

His exit, following DeBoer’s departure, should not come as a shock.

It’s just uncharted territory for Bulldog fans, especially with it coming just one day after DeBoer inked his new contract with Washington.

It hurts to see Haener leave before the bowl game and likely return to the school that he left because he wasn’t named the starter. It hurts to see him leave the Central Valley, a community that welcomed him with open arms.

For fans, Haener’s departure probably makes it feel like the program is in shambles. Losing a head coach and starting quarterback in the span of a couple days has left Fresno State reeling.

As much as Haener’s and DeBoer’s exit hurts, Cropper’s would be the ultimate gut punch. He’s a local product, after all.

But he’s given no indication that the transfer portal is in his future and very likely may remain a Bulldog.

While it looks like Fresno State is reeling, the Bulldogs are in more than fine shape.

Whomever Athletic Director Terry Tumey taps to lead the program, whether it be Jeff Tedford once again or someone else, will step into a Fresno State team coming off a 9-3 season.

It’s an altogether much better situation than the program’s condition was during the 2016 coaching change when the ‘Dogs were coming off a historic-worst 1-11 season.

The Bulldogs are also in better shape than the transition from Tedford to DeBoer following the 4-8 2019 season.

Be prepared for more players to leave – they always do when a coaching change occurs – but the next Fresno State coach should do whatever it takes to bring Fresno-native Adrian Martinez back home.

Martinez, a Clovis West product and four-year starter at Nebraska, entered the transfer portal Thursday and will likely be coveted by a smattering of Power 5 programs.

But Fresno State can offer the perfect blueprint to Martinez: Marcus McMaryion.

Tedford brought McMaryion in at the start of the 2017 season, and the Dinuba native turned into one of the best players in program history as he led the ‘Dogs to the 2018 Mountain West title.

He sees Martinez as the guy to follow in his footsteps.

Martinez could become a legend in the Central Valley and would quickly be immortalized in the pantheon of Fresno State greats if he returns the ‘Dogs to the peak of the Mountain West.

Whether Martinez returns to the Valley, freshman quarterback Jaylen Henderson takes over or the next head coach brings in another quarterback, Fresno State will have plenty of options to move past Haener and compete for a conference title in 2022.

Perhaps, the Central Valley could learn a lesson from Aaron Rodgers: R-E-L-A-X.

Relax Bulldog fans, trust Tumey to make the right hire to lead the program past DeBoer and Haener.

Fresno State will be fine.