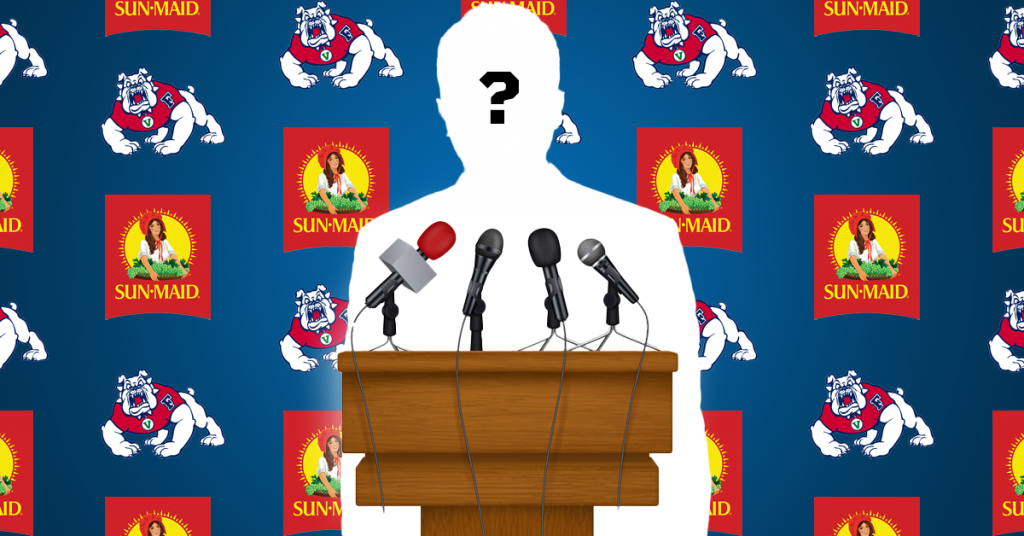 It’s a shame Lane Kiffin is too big for Fresno State as he enjoys all the allures and luxuries of being the top dog at Ole Miss.

Instead, maybe the university could lure Ted Lasso back across the pond to return to his American football roots.

All kidding aside, where does Fresno State turn after former head coach Kalen DeBoer jumped ship for greener pastures – and lots of rain – at Washington and Jake Haener enters the unknown in the transfer portal?

Monday’s DeBoer-led departure marked a transition into unusual times for Fresno State. Tuesday’s news of Haener’s exit set off a wholesale shake-up that I’ll address at another time.

For a program that had two coaches – Jim Sweeney and Pat Hill – over a 31-year-span, the prospect of seeking a fourth head coach in six years is certainly a drastic change of pace.

Tim DeRuyter was axed during the 2016 and was replaced by Jeff Tedford the following year. At the time of hiring, Tedford was seen as the successor to Sweeney and Hill – a steady skipper set to mold the Bulldogs for the long haul.

That’s not what the Red Wave got.

Instead, Tedford stepped down in 2019 after just three seasons over health concerns.

Then newly-minted athletic director Terry Tumey turned the ball over to DeBoer to helm the program.

It’s also uncharted territory for modern-day Bulldogs fans to have to see their coach leave to take the same position at another program. The last time this happened was when Darryl Rogers traded the Central Valley for the Silicon Valley in 1973 to take over San Jose State.

While DeBoer’s exit comes as no surprise given the upward trajectory of his career, it stings for Fresno State fans. DeBoer might have the most class of any football coach across the nation, but his departure just four days after the regular season ended on Thanksgiving feels abrupt.

DeBoer spent time at his introductory press conference at Washington on Tuesday to thank the Fresno community for supporting him and noted the speed of this process, which limited him to saying goodbye to the players and not many others.

Given his character, it’s hard not to expect a few more thank yous and goodbyes on the way from DeBoer to the Red Wave.

Nevertheless, it was certainly jarring to see Washington’s announcement video and DeBoer switching from saying “go ‘Dogs” to “go Dawgs” at the behest of Washington Athletic Director Jennifer Cohen.

Congratulations are in order to DeBoer for catching the attention of Cohen and Washington. His opportunity to move to a Pac-12 school with vast resources brings him close to the peak of collegiate football.

The university needs to face the reality that mid-major programs are stepping stones for coaches, especially in the college football landscape of 2021.

So where does Fresno State turn to have a coach in place by the all important early National Signing Day on Dec. 15?

The Twitter-verse is clamoring for Tedford, which was buoyed by a tweet last week from Pete Thamel of Yahoo Sports reporting Tedford’s interest in returning to the sidelines.

If he is indeed 100 percent healthy with no risk of any heart issues popping up, by all means Fresno State should rehire him.

In the midst of DeBoer-led success, it’s easy to forget exactly how dominant Tedford’s stint was.

He made the conference title game in 2017, his first year at the helm, and won the Mountain West Championship in 2018.

Although his 4-8 2019 season was tough to swallow, a messy transition at quarterback suggests that this was an aberration compared to his previous success.

But Tedford’s health is a major factor that is hard to move past. In 2014, when he was the offensive coordinator with the Tampa Bay Buccaneers, Tedford had two stents inserted into his heart to combat blockages.

In January 2020, shortly after he stepped down from Fresno State, Tedford underwent an ablation procedure at the Mayo Clinic.

Tedford needed that procedure because of heart rate issues that arose near the end of the 2019 season. At his press conference to announce his resignation, Tedford revealed that one morning he woke up feeling something was wrong with his heart but attended practice anyways.

After practice, he went to his cardiologist who sent him to the hospital.

“They put me under and they had to shock me twice to get my heart back in rhythm, because it was going from like 48 to 167 for no reason at all, sitting here just like we are right now,” Tedford said at the time.

As great of a coach as Tedford is, rehiring him would be an awful risk for university administration. Tumey and Fresno State President Dr. Saul Jimenez-Sandoval would have much to answer for if God forbid something happened to Tedford on the sideline or the practice field.

If the doctors can guarantee the 60-year-old’s health for several years, all power to Tumey to bring Tedford back.

Given Tedford’s health concerns, there is not a perfect candidate to take over the program as there was when DeBoer returned from one year at Indiana. There is not a young, up and coming coach out there with ties to Fresno State who is a no-brainer type of hire.

Fresno State needs to broaden its horizons beyond coaches with previous experience as a Bulldog.

Yes, Bulldog Born, Bulldog Bred is great, but by no means should it be a requirement.

Remember, Sweeney, the Godfather of Fresno State Football, was a Butte, Montana, native who played college ball at the University of Portland and never coached the ‘Dogs until his first stint as head coach in 1976.

There are plenty of great coaches out there who would love the chance to take over a program that proved to be one of the top mid-majors in the nation this season. Too many qualified coaches would be eliminated just because they don’t know the lyrics to Bulldog Spirit.

Don’t be so scared of an outsider just because the Valley got burned by DeRuyter. As long as the new coach can point to Firebaugh on a map and capture the next Josh Allen, the Bulldogs and their Valley ties should be just fine.

To look outside of coaches with previous Fresno State connections, Tumey should target coordinators at top Power 5 schools.

Fresno State could even look at the FCS ranks and pull Sacramento State’s Troy Taylor, Montana State’s Brent Vigen or Eastern Washington’s Aaron Best. They might not be the attractive hire, but they run winning programs and are on the rise.

If Fresno State is dead-set on a former Bulldog, the search – outside of Tedford – should at least start with current coordinators Ryan Grubb and William Inge.

Grubb, the offensive coordinator, is challenging to evaluate because he has always been tied to DeBoer. The one season without DeBoer, 2019, Grubb’s Jorge Reyna-led offense did little to inspire hope. But the last two years with Jake Haener at the helm have been a different story. There is a lingering question, though: How much of the offensive success was DeBoer’s doing versus Grubb’s?

Although Inge has only been in Fresno for two seasons as the defensive coordinator, he did produce the Mountain West’s No. 4 scoring defense in 2021 as his unit made a name for itself with its aggressive play. He’s also an excellent motivator who would be a great face of the program, someone who the Central Valley could easily rally behind.

Plus, his witty press conference quips are second to none.

Wide receivers coach Kirby Moore also deserves a look considering how instrumental he has been in recruiting and developing players like Jalen Cropper and Josh Kelly.

Andy Ludwig, Jim McElwain and Doug Nussmeier are all involved with highly successful offenses at Utah, Central Michigan and the Dallas Cowboys, respectively, and have that Bulldog experience that is so craved by some.

One other name that could draw interest – whether as head coach or offensive coordinator under Tedford: Trent Dilfer.

It would be quite a reach to bring the Bulldogs’ former star quarterback from his position as a high school coach in Tennessee back to the Valley, but he could be the man that energizes the Red Wave and draws enough fundraising to finally renovate Bulldog Stadium.