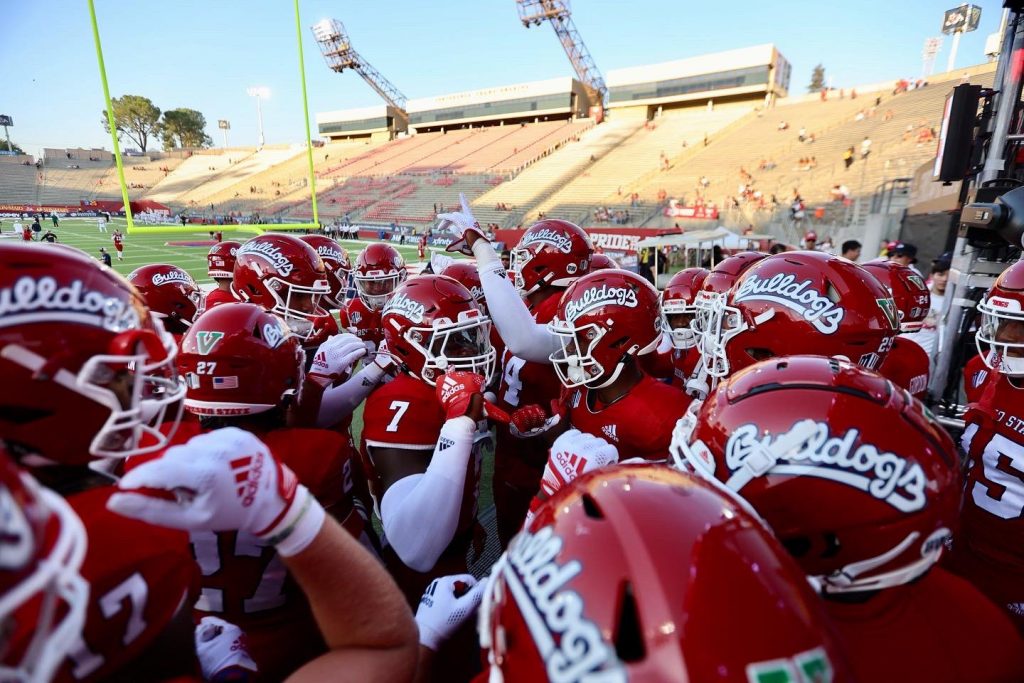 Things almost took a turn for the worse Thursday night inside the newly-christened Valley Children’s Stadium, but the Bulldogs got the job done and beat Cal Poly 35-7.

After jumping out to a flawless 21-0 start in the first quarter, Fresno State started to stumble in the second quarter.

Cal Poly put together a nine-play, 75-yard touchdown drive, and the ‘Dogs quickly went three-and-out on offense to punt the ball right back to the Mustangs.

After trading a couple more punts, Cal Poly drove 84 yards down the field to the Fresno State eight-yard line, threatening to pull within one score as halftime approached.

But the ‘Dogs defense held together and denied the Mustangs from gaining too much ground on a 4th and five attempt, and just a few minutes later they went to the locker room with their 14-point lead intact.

That fourth down stop proved to be a precursor of events to come for the rest of the game. Cal Poly tried two other fourth down conversions near the goal line, but the ‘Dogs came up big each time.

Overall it was a far cry from last year’s 63-10 win over the Mustangs.

After the game, Head Coach Jeff Tedford chalked up the good but not thoroughly dominant win as rust.

“Very rusty – I thought we performed pretty well at times, but too many penalties. We have to learn how to keep the grind on. We’re up 21 nothing, and then after that it seemed like the floodgates opened with penalties, putting ourself in bad situations, giving them plays on defense with penalties, offsides, late hit on the quarterback,” Tedford said. “Those are discipline plays. We have to improve those things for sure. I want to give Cal Poly a lot of credit, though. They played really really well, really hard, well coached football team. Those guys are going to win a lot of football games this year.”

Along with 6 penalties for 65 yards, the offensive line struggled at points, giving up 3 sacks.

Defensively, the Bulldogs struggled to contain Cal Poly quarterback Jaden Jones, who had 59 rushing yards on nine attempts, including three for a first down.

“Letting the quarterback out of the pocket, he kind of killed us tonight,” Tedford said. “He’s a good little scrambler. When we play somebody like that, we’ve got to put a spy on the quarterback so you can’t convert first downs, which is what most of their offense was, was him doing that.”

On the bright side, Cal transfer Nikko Remigio made an impact from the get-go at wide receiver, leading the team with 9 receptions for 100 yards and adding 26 yards on the ground with 1 rushing touchdown.

Quarterback Jake Haener was also in midseason form early on as he completed 86 percent of his passes for 377 yards and 2 touchdowns.

The next two weeks will make for a completely different challenge as the ‘Dogs take on the Pac-12, starting with Oregon State at home.

Whether it was a problem executing or simply letting off the gas against an inferior opponent, the Bulldogs cannot afford to play with the same rust they showed Thursday if they hope to make a national statement in the coming weeks.

“Coach [Jim] Sweeney said a long time ago the toughest games to win are the ones that you’re supposed to win. Those trap games that they talk about, things like that,” Tedford said. “Again, I’m going to say hats off to Cal Poly. I talked to their coach before the game, this is the first real time that they’ve had after COVID putting together a full season of practice, recruiting and all that stuff. I had a good talk with him. It’s great to win, so I’m relieved by that, but I will look forward to watching this tape to see how we can get better.”