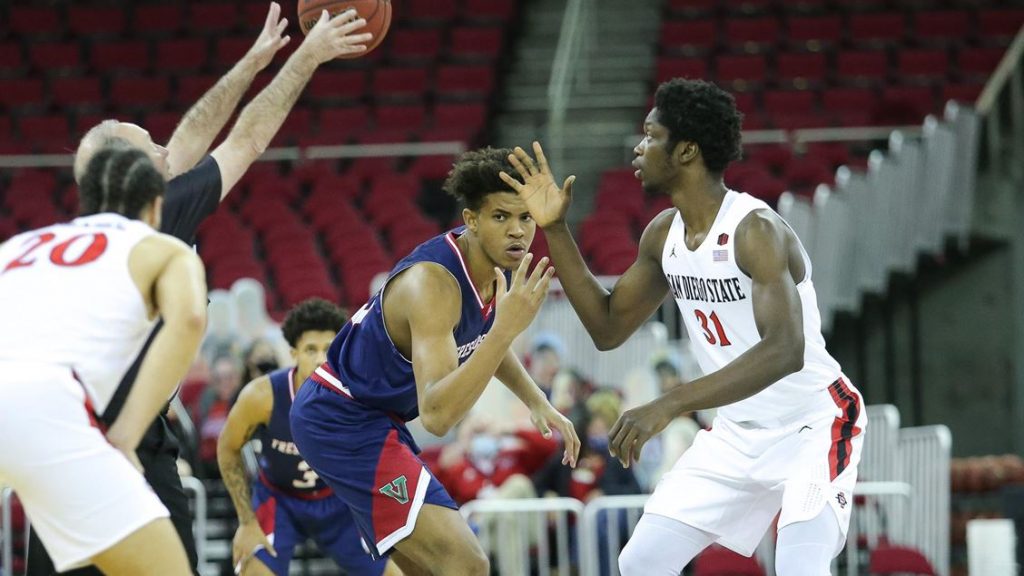 Just a few weeks ago, Fresno State looked like a team that could cause serious damage in Las Vegas, even good enough to win the Mountain West Tournament.

Now, following Fresno State’s fourth straight loss – the latest at home 61-44 to San Diego State – the Bulldogs only have two weeks to right the ship.

This slump over the last few weeks has been marred by the simple inability to get shots to fall in the basket. The recent offensive issues were not more prevalent than Saturday’s loss.

Fresno State only made 34.1 percent of their shots and went 6-20 from beyond the three-point arc.

Beyond another strong performance from point guard Isaiah Hill – who had 15 points and made 4-8 three-point attempts – no other Bulldog stepped up offensively.

Star forward Orlando Robinson has had an inconsistent few weeks and struggled to get to the basket from the post, finishing 3-10 from the field. He also shot 3-7 from the free-throw line, compounding on his struggled to lead the offense, as he had previously done for the majority of the season.

After the game, Fresno State Head Coach Justin Hutson pointed to the Aztecs scoring 14 points off turnovers, stealing any momentum the Bulldogs appeared to have at any given moment.

“The story of the game was points off turnovers, offensive rebounds. The disappointing part was some of our turnovers is when we were on the fast break to get a basket. Yeah, they forced a couple in the first half, but we had enough self-inflicted turnovers when we got a steal, and we’re out on the break and we’re supposed to get excited and get a basket,” Hutson said.

“And we lose it and then it goes back, and then that was a little demoralizing. That’s how good a defense we played, that you’re turning the ball over and you’re still holding them to 60 points, and it could’ve been less than that. We’ve just got to play better offensively. We’ve got to make some shots.”

About the only thing that went right for the ‘Dogs on the offensive end was at the start of the game.

Led by 5 points from Robinson, the Bulldogs jumped out to a 7-point lead in the game’s first 10 minutes.

But Robinson only had 4 more points all game, and the Aztecs went on a 24-7 run to close out the first half and never looked back.

“When they went on that run on us, it was turnovers and rebounds,” Hutson said. “And then they had one guy get hot in the first half, and we made mistakes of not sticking with him.”

That player was guard Chad Baker-Mazara, who had a game-high 20 points, 13 of which came in the first half.

Baker-Mazara’s performance came as a surprise, as he was only averaging 5.5 points per game up until this point. He also played a near-perfect game, going 6-7 from the field, including 4-5 from three-point range despite the fact that he was making threes at a 33 percent clip this season.

With the loss, the Bulldogs dropped to 6-7 in conference play and 16-10 overall, making it more likely that they’ll earn the sixth seed in the Mountain West Tournament, just missing out on a first round bye.