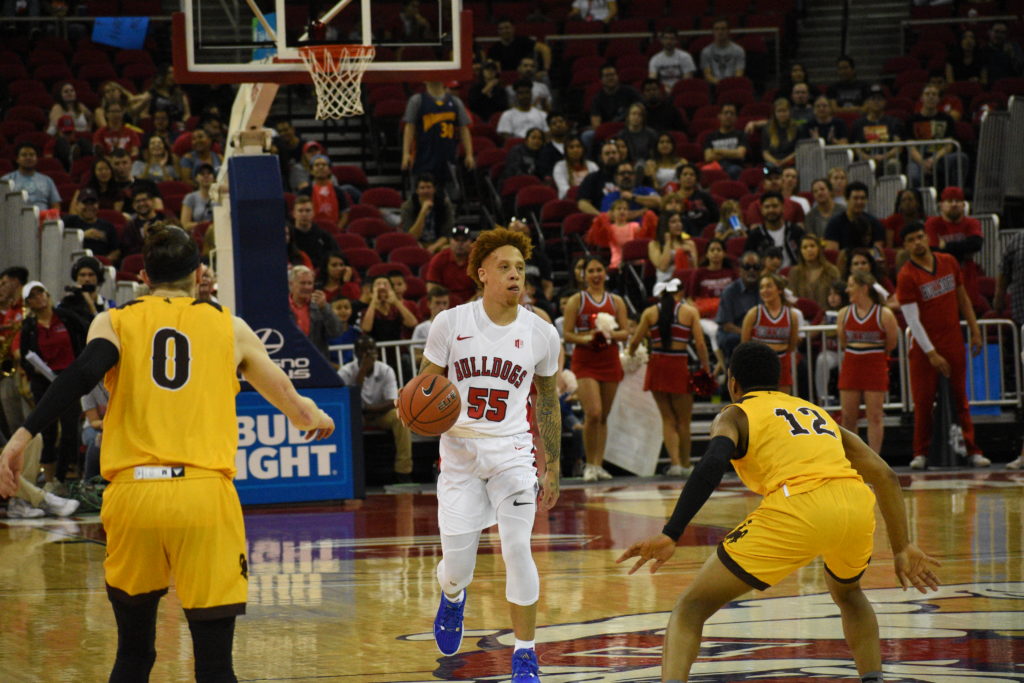 Things looked like they were going south early for the Bulldogs Saturday on Senior Night, but they managed to hold on until they found an offensive spark in the second half.

Fresno State men’s basketball – led by a combination of the three senior starters and several freshman – beat Wyoming 63-55 at the Save Mart Center in the last game of the regular season.

The Bulldogs simply looked off in the first half, but luckily for them, Wyoming didn’t look any better.

The ‘Dogs were 7-26 in the first half from the floor, good for 26.9 percent, and they only made a quarter of their three point attempts. They also had 8 turnovers in the half. The Cowboys were only a little better – 33.3 percent shooting from the floor and 28.6 percent from three.

Those poor first half performances allowed the Bulldogs to head into the locker room only down 22-21.

After a long conversation at halftime, the Bulldogs came out looking like a different team. Wyoming did too, and fans got to see legitimate Mountain West basketball in the second half.

Wyoming jumped out to an eight point lead within the first 2:07 of the half, but the Bulldogs stormed back and tied it up just a few minutes later largely on the back of freshman guard Jarred Hyder.

After the Cowboys and ‘Dogs traded threes, Hyder made a layup and gave Fresno State its first lead since the opening minute.

Fresno State wouldn’t lose it. The Bulldogs played just well enough to hold a couple possession lead throughout the rest of the game.

Wyoming managed to shrink the Bulldogs’ lead to two with a couple minutes remaining, but senior New Williams sunk a three with 52 seconds left on the clock to put the game away.

“He works on it. He’s confident, and I knew if he didn’t have the shot, he would dump it in. And he had been playing where he was going to get into the paint and get somebody something.”

Williams had not made a shot from the floor up to that point, and that ended up as the only basket he made outside of the free throw line, where he went 7-8.

“I know coach believes in me, and he knows I believe in me,” Williams said. “So when they made that call, if I had it, I was going to shoot it. If I didn’t, like he said, I was going to throw it in.

“I’m always embodying his next play mentality on my shooting as well, so it’s always the next shot for me. The last one didn’t go in, or if it did go in, I’m always on to the next shot. So I was ready for the opportunity.”

Hyder and fellow freshman guard Niven Hart led the Bulldogs with 11 points each.

In their last performance at the Save Mart Center, the seniors were as important as ever. Williams finished with 10 points, guard Noah Blackwell scored 8 and forward Nate Grimes added nine points and led the ‘Dogs with 14 rebounds.

“So we’re going to error on the side of we think we can beat anybody, but we do know that whoever our first opponent is, it’s going to be a tough one for us, and we’re going to have to come ready to play.”