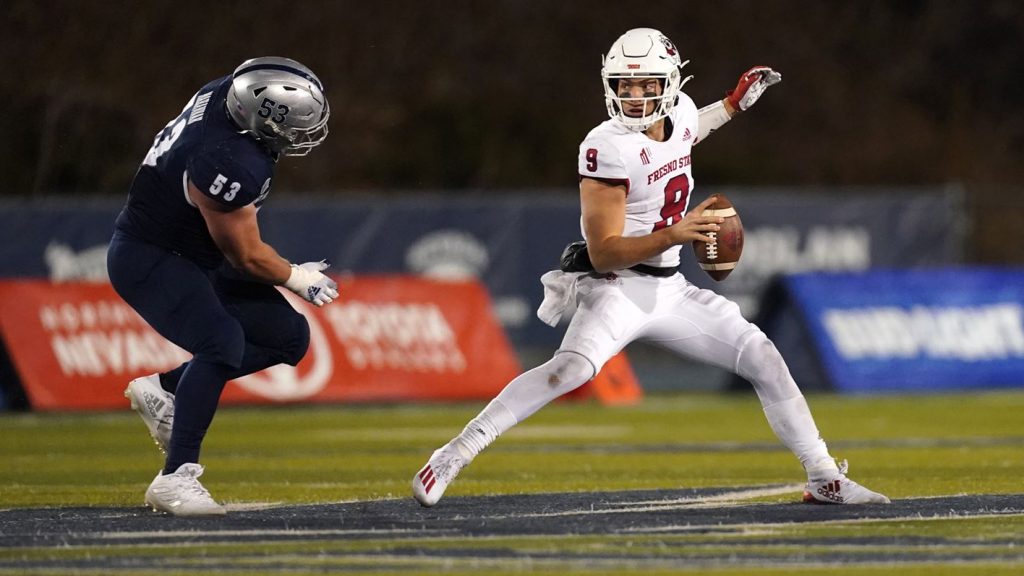 Against all odds, Fresno State football managed to play a season in 2020. That in and of itself is an achievement given the challenges presented by the COVID-19.

The Bulldogs ended the season with two consecutive losses, but those low points shouldn’t detract from Year 1 under head coach Kalen DeBoer.

DeBoer inherited a 4-8 team from Jeff Tedford and led the ‘Dogs to a 3-3 record as a first-time head coach at this level. Coming into the season, DeBoer had to manage a quarterback battle and deal with a roster that just lost three players to the NFL – Juju Hughes, Netane Muti and Mykal Walker.

The Bulldogs had all their team activities cancelled on March 12 because of the pandemic, just four days before spring practice was scheduled to start. Fresno State ended up being the last school in the country to resume football activities on Sep. 25.

The odds were stacked against them, but the Bulldogs overcame all the challenges they faced and put forth a competitive team the Valley could be proud of.

No one knows if 2021 will see college football return to normal, but the future looks like it will be a bright one for DeBoer and Fresno State.

Here’s a look at several key areas from the 2020 season:

Jake Haener is a top-flight QB

Midway through fall camp DeBoer and offensive coordinator Ryan Grubb said the quarterback battle between Haener and Ben Wooldridge was as close as it could be, and they would be comfortable having either quarterback under center.

Haener won the battle and proceeded to throw 3 picks in the season-opening loss to Hawaii, not looking at all like a player who nearly won the starting job at Washington last year.

Haener came out in Week 2 and led the Bulldogs to victory over Colorado State behind his 3 touchdown performance. His final statline for the season reads: 150-232 (64.7%), 2021 yards, 14 touchdowns and 5 interceptions.

“He has a really high bar he sets,” Grubb said last week when asked about Haener’s progression. “I know I just keep inching that bar up for him and keep pressing him on preparation. I know he doesn’t want to be good, he wants to be great. He wants to be one of the guys that’s slinging the ball around here at Bulldog Stadium that people will remember for a while.”

Haener is on his way to joining the pantheon of great Fresno State quarterbacks. If you double his statline to compare to a regular 12 game season – which wouldn’t even account for a conference championship or bowl game – Haener would have had the best all-around season since Derek Carr in 2013.

Compared to the rest of college football, Haener’s 336.8 yards per game ranks fourth in the nation, ahead of top NFL prospects Trevor Lawrence and Justin Fields.

With two years of eligibility remaining, Haener is just beginning to make his mark with the Bulldogs.

When we look back at the 2020 season, besides thinking about how the pandemic affected everything, running back Ronnie Rivers will come to mind as the most exciting player on the team.

Rivers played in all six games, although he only had one carry in the last game against New Mexico due to an injury he sustained the week before, and his dual-threat ability out of the backfield shined. He ran for 507 yards and 7 touchdowns, and he also caught 27 receptions for 265 yards and 2 touchdowns.

Outside of his next-level explosiveness, the most impressive thing about Rivers was his ability to break tackles – a major product of his offseason work in the weight room to bulk up by about 10 pounds.

Unfortunately, Rivers was the biggest loser when the games against San Jose State and San Diego State were cancelled due to COVID-19 contact tracing within the Fresno State program. Rivers scored all 9 touchdowns in the first four weeks to tie Anthony Daigle with 44 career touchdowns, but he wasn’t able to find his way into the end zone in the last two weeks, especially after his injury.

Maybe the allure of breaking the touchdown record and cementing himself even further as an all-time great Bulldog will pull him back to Fresno State next year – with the NCAA granting all players an extra year of eligibility due to the pandemic – but Rivers belongs in the 2021 NFL Draft.

Jalen Cropper is the real deal

Last season wide receiver Jalen Cropper mostly contributed on the fly sweep, although he did flash his potential little by little at times. That potential was realized in 2020 as Cropper progressed into a bonafide No. 1 wide receiver.

Cropper led the team with 520 receiving yards and 5 touchdowns and showed great chemistry with Haener. His 202-yard, 3 touchdown performance against Utah State also earned him conference player of the week honors.

While Cropper was the star, redshirt freshman Josh Kelly stepped up in a big way this season, getting playing time as others dealt with injuries. Kelly tallied 330 yards, and Keric Wheatfall also went for 363 yards.

Next year Cropper should take an even greater step, and the group around him has a chance to go down as one of the best wide receiver units in program history.

There’s no sugar-coating it: Fresno State’s defense struggled in 2020. That’s not all that surprising since the Bulldogs installed the 4-2-5 scheme under new defensive coordinator William Inge, and injuries – and presumably contact tracing – left the unit short-handed in the last two weeks of the season.

The main culprit was the run defense, which gave up 212 yards per game, ranking 9th in the Mountain West. The defense allowed opposing teams to break off on big-play runs far too many times. Opponents racked up 18 rushes that went for over 20 yards, second-worst in the conference.

The pass defense fared better, 6th overall in the Mountain West at 217 yards per game, in large part due to a breakout performance from redshirt freshman and former walk-on Bralyn Lux at cornerback.

Lux was just one of many Bulldogs who burst onto the scene this year early into their careers. True-freshman linebacker Justin Houston started three games at the “Husky” position – the linebacker/defensive back combo in Inge’s scheme and redshirt freshman Malachi Langley emerged as a starting linebacker to complement sophomore Levelle Bailey, who stepped up after an impressive freshman season last year.

Most importantly on the defense, though, was the emergence of arguably the best pass rush in the conference. Defensive tackle Kevin Atkins and defensive end Kwami Jones led the ‘Dogs with 5 sacks each, with defensive end David Perales right behind with 4.

Perales was the real difference-maker on this Fresno State defense. He led the way with 9 tackles for loss and forced 4 fumbles.

Perales will be back with the full complement of young talent that should continue to grow next year. It will take something special for the defense to catapult to the top of the conference, but the Bulldogs will enter 2021 with the talent to at least put together a unit that ranks in the top half.