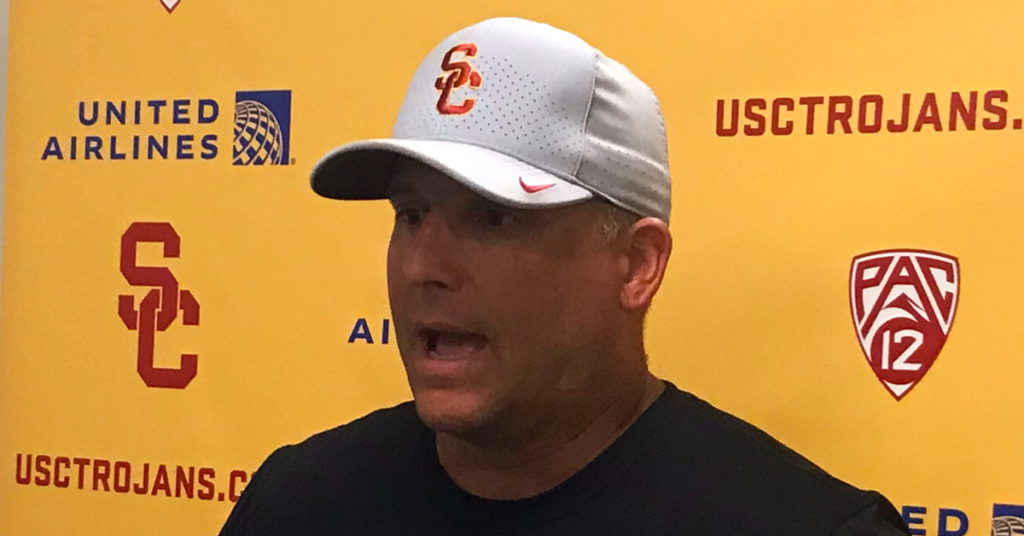 As Fresno State and USC prepare to face off in the season opener Saturday in Los Angeles, Trojans head coach Clay Helton spoke to the media after practice Thursday for the last time before he matches up against Jeff Tedford’s Bulldogs.

The Sun joined in with the Los Angeles media to hear what Helton had to say.

On what he expects to see out of Fresno State given Tedford’s success:

“Just very very well coached and very balanced. I thought last year just going all the way through the season, what he did both run and pass wise was extraordinary. Any team that can go to Boise and go win on the blue turf to win their conference championship is a well coached team. I don’t know how many times that had been done, it might have been the first time to be honest with you. I think it was. So this is a typical Jeff Tedford group, and I don’t expect anything less. He has a couple new faces that will be out there both offensively and defensively, but we know they’ll be well coached. They’ll be where they’re supposed to be. You don’t see a lot of people bust group. It will be, like I told our guys, it will be about fundamentals and execution – execution of our offense and defense, and the standard of play that we set all the way through camp. Playing enthusiastically, but not playing emotionally. Control our emotions and just do our job.”

On general excitement on team heading into the first game:

“I think all of us are ready. It’s been seven months I’ve been ready to get back in the Coliseum – a brand new Coliseum. And just a taste we’re ready to get out of our mouth, a bad taste. We’ve worked excessively hard in making corrections off of last season. I was just telling Tim Tessalone, our sports information director, this is the most fun I’ve ever had as a coach in 25 years. This group – they’re a joy to coach. They’re kind of a shut up and work bunch. They enjoy being around each other. They enjoy competing. I just can’t wait to see them – allow them to go out there after all the work that they’ve put in – to go enjoy a Saturday, because it’s been a lot of work over seven months. I look forward to seeing the product Saturday.”

On toughest positions to sort out while putting together depth chart:

“I think some of our youthful positions. When you look at the secondary right now, you’ve got some really talented individuals there. They need experience. We’re going to have to play a lot of guys in the back end. That’s our plan, is to be able to play three to four corners, to be able to play three safeties, to be able to play nickel. Our front is pretty solidified. Our we’re two deep, and I think we’re really solid. We’ll have some growing pains in the back end. I think [defensive coordinator] Clancy’s [Pendergast] done a wonderful job mixing in some coverages that can help them. They’ll have successes, they’ll have failures, but I know this – they are ultra talented. And as they grow, we’ll grow as a team. So that’s probably the most of just saying, ‘OK. We’ve got to let all these kids get their feet wet and get the big eyes to go to small and get calm and get comfortable in their own skin. So we’ll plan on playing several guys in the back end.”

On how many true freshman he anticipates playing on Saturday:

“That’s a hard number to say. There will be some that are out there with one offense, one defense. There will be some that will be special teams players. And that’s the beauty of what the rule did last year for us. The four game rule just allows you to do so much. You can select half those freshmen to play early and half of them to play late. You remember we played [linebackers] Eli’jah Winston and Malik McClain late in the season. We saved them just because we didn’t know if injuries would occur, and we had a bunch of them. Thank goodness we were able to use them late. They’re some kids that we feel just need a little bit more time, and we’ll save those game until later. And then they’re some kids that we feel are ready to help and contribute right now.”

On preparing for a Fresno State team that has a lot of roster turnover:

“Generally you know who they are, and you know who coach Tedford is. Obviously for personnel matchups it’s a little bit different. And there’s several things that go in that are a little bit different this year. You think of even the new kickoff return rule. Everybody that used to double team on their return, we can’t do that anymore. You can’t have a wedge. You can’t have a double team. So it’s a little bit different all the way around. So I think we’re going to have to be really good and identify what’s going on in the game, making adjustments within [the] game. There’s not a huge change in philosophy there. It is a change in personnel, and we’ll have to identify all the personnel matchups as the game goes on.”