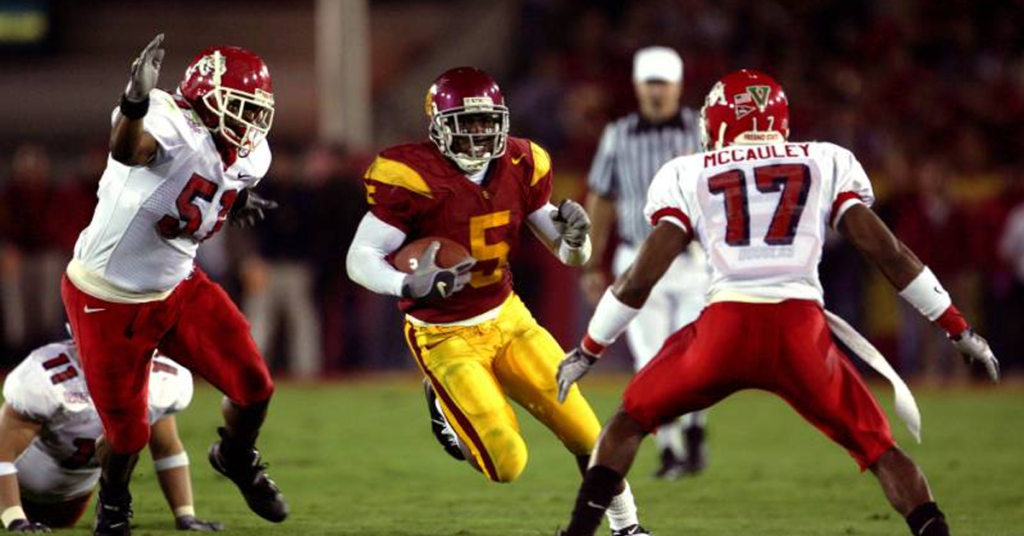 The Bulldogs and Trojans will meet for the fifth time Saturday at the Los Angeles Memorial Coliseum.

USC officially leads the series 2-1, but the Trojans have won three times. The win in 2005 was vacated due to the Reggie Bush recruiting scandal.

Here’s a look at the four matchups between the two California programs:

The one victory for Fresno State came in one of the most famous games in program history. The Bulldogs entered the game with an 8-4 record and a share of the WAC Championship, while USC stumbled in with a 6-4-1 record after losing in consecutive weeks to UCLA and Notre Dame.

Led by head coach Jim Sweeney and quarterback Trent Dilfer, the Bulldogs cruised to a 24-7 win by dominating every facet of the game. The ‘Dogs held the Trojans to 95 passing yards and 88 rushing yards.

The key though was time of possession: Fresno State dominated by controlling the ball for more than 37 minutes, pushing the Trojans with long drive after long drive.

The game started out evenly matched, and USC took the lead with a touchdown in the second quarter. But that would be all the Trojans could muster.

Fullback Lorenzo Neal was named the MVP. The Bulldogs outgained the Trojans 405-183.

Current head coach Jeff Tedford was on Sweeney’s staff as the quarterbacks coach, his first coaching position in college football.

Although the Bulldogs lost, this game was one of the pinnacles of the Pat Hill era. Fresno State was on the rise, coming in at 8-1. The lone loss came at Oregon in Week 2 by three points.

USC was the No. 1 team in the country at the time coming in undefeated at 10-0, including a win the week before against the Tedford coached Cal.

Quarterback Paul Pinegar led the charge by passing for 317 yards and four touchdowns. But he also threw four interceptions, giving the Trojans too many chances.

Fresno State scored first and went into halftime with a 21-13 lead, which put USC in an unusual position.

But running back Reggie Bush came alive in the second half and had a career performance filled with highlight plays. He finished the game with 294 yards and two touchdowns, averaging a ridiculous 12.8 yards per carry.

The Trojans scored 28 points in the third quarter and held on to win 50-42, crushing Fresno State’s dreams of making a BCS game at the time.

Fresno State would go on to lose out the rest of the season while USC went on to lose to Texas in the Rose Bowl National Championship.

Derek Carr’s last game as a Bulldog was one to forget. He only completed 55.6 percent of his passes and threw for 217 yards, both numbers well below his season average.

The Trojans jumped out to an early lead and never looked back. Quarterback Cody Kessler diced up Fresno State’s defense, finishing with four touchdowns en route to the 45-20 win.

Most notably, USC head coach Clay Helton served as interim head coach that game, the first time being the man in charge. Although he returned to be the offensive coordinator the following season, Helton got the most out of his team to defeat one of the best Fresno State teams in history.

Fresno State opened the season in the Coliseum, but the Bulldogs never stood a chance after losing star players from the previous year to the NFL, including Carr and wide receiver Davante Adams.

The Bulldogs found themselves in a 24-0 hole in the second quarter that they were unable to come back from.

Kessler had another four touchdown performance and added 394 yards while facing no real challenge.

USC won 52-13, the Trojans’ biggest victory over the Bulldogs. This marked the beginning of the end for Tim DeRuyter at Fresno State. Although the ‘Dogs would go on to play in the Mountain West Championship game against Boise State, they didn’t get the job done and finished with a 6-8 record.

The ‘Dogs went 3-9 the following year, and DeRuyter was axed eight games through the 2016 season, leading to Tedford taking over the program.