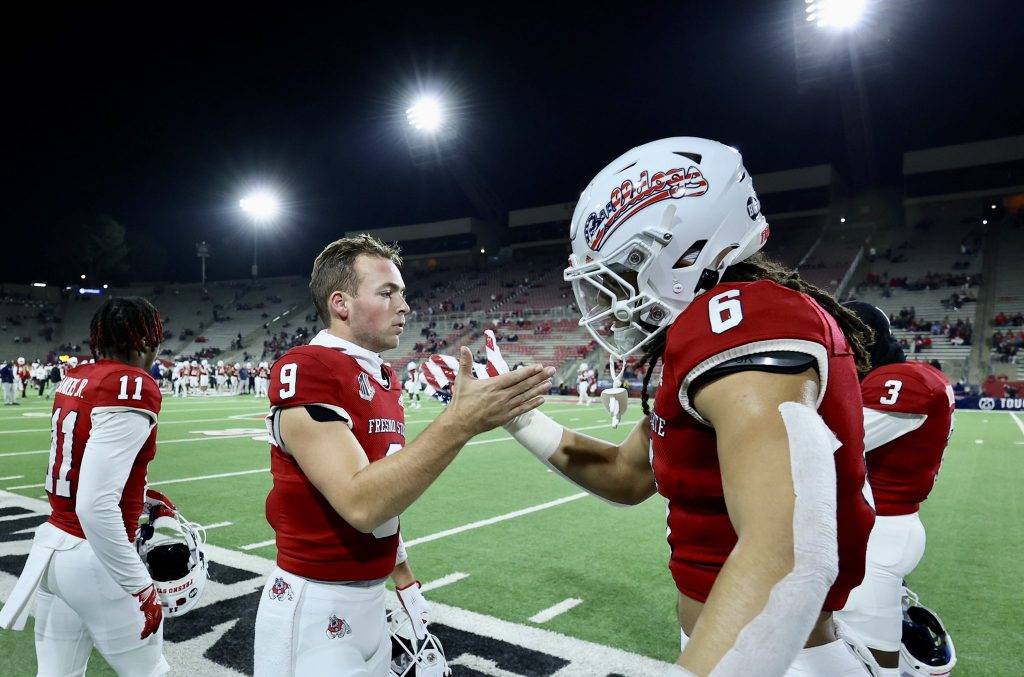 A field goal, a pick six and a rushing touchdown capped off a dominant first quarter for the Bulldogs that proved to be more than enough for the rest of the night.

Rarely can a team put a game away in the first quarter, but Fresno State did exactly that. The Bulldogs used their commanding early lead to steamroll their way to a 55-13 win over Hawaii on Saturday at Valley Children’s Stadium.

Saturday’s performance by the ‘Dogs was what the Red Wave expected to see earlier in the season.

While they were heavily favored to beat UConn on the road several weeks ago, that upset loss had the ‘Dogs reeling.

But with another opportunity as a clear favorite – Las Vegas predicted the Bulldogs would win by nearly four touchdowns – Fresno State didn’t disappoint.

The Bulldogs got off to a hot start and never looked back. The offense scored on all four of its possessions in the first half, and the defense pitched a shutout while scoring points of its own with a first quarter pick six by cornerback Cam Lockridge.

“Obviously Cam Lockridge’s interception for the touchdown was a huge play of the game because it really got the momentum going,” Head Coach Jeff Tedford said after the game.

Fresno State continued to pile on in the second half with an unstoppable offensive attack.

After returning last week in the win over San Diego State, quarterback Jake Haener delivered another standout performance, going 24-29 for 327 yards and 4 touchdowns through the air.

And that wasn’t even a complete game for Haener as backup quarterback Logan Fife stepped in with 13 minutes remaining with the Bulldogs up 48-0.

“I thought that was probably one of the most complete games that we’ve played as a team all season long,” Haener said.

The running game struggled last week but returned to form against the warriors with over 200 yards on the ground. Running back Jordan Mims led the ‘Dogs with 123 yards and 1 touchdown.

Hawaii’s only times finding the end zone came with under four minutes remaining when the game was well out of hand.

Fresno State also played a clean game with only one penalty, which came in the last minute of the game.

Along the lines of a complete game, Haener only took one sack, a major improvement over the seven sacks given up last week.

With the win Fresno State improves to 5-4, and the ‘Dogs control their destiny in the Mountain West.