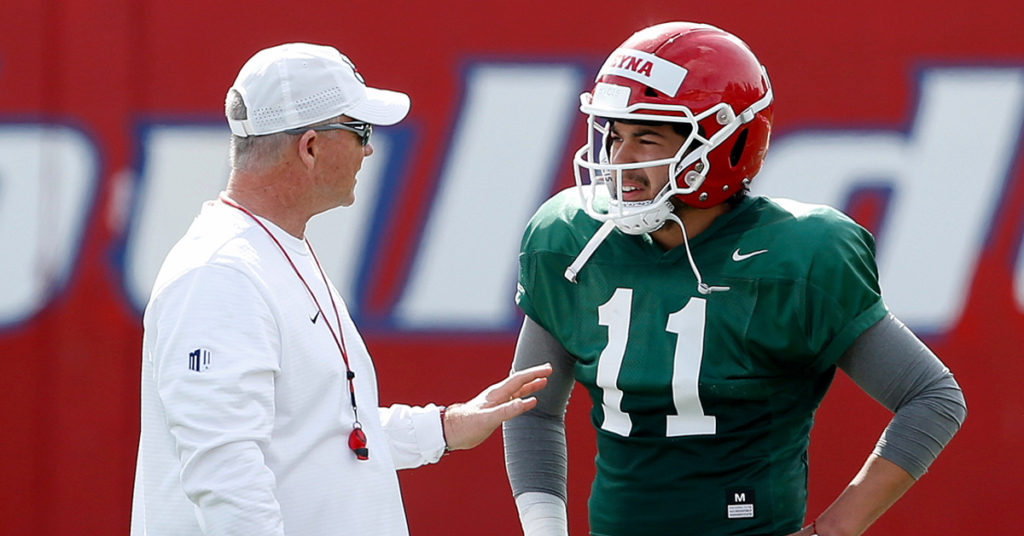 Fresno State quarterback Jorge Reyna wasn’t happy with his performance last Saturday at USC, pointing to a critical interception he threw in the endzone to finish off the game as a mistake that shouldn’t have happened.

After reviewing the film, Reyna’s sentiments remained the same Wednesday as they were Saturday night.

“There were a lot of opportunities I missed, bonehead opportunities,” Reyna said. “We could’ve capitalized. A lot of mesh work we worked on with the running backs. That was my fault. But other than that, just the mistakes that I’ve got to learn from and move on from it.”

But, ultimately, he’s being hard on himself. Reyna looks at himself first and foremost when the game doesn’t go how the Bulldogs would like. That’s what leaders do. There’s a reason he was voted a team captain by his peers.

After the roller coaster that was the first game of the season, it would be easy for any player to get caught up in the emotions of coming so very close to knocking off a Pac-12 opponent on the road.

But Reyna has bounced back in practice and has a chance Saturday to face another Power 5 opponent in Minnesota – a second chance, in a way.

“I think he’s been really good,” quarterbacks coach Danny Langsdorf said. “I think that he has always been a good worker. I think that we were able to look at the SC game closely and make some corrections and point out some things to improve on.”

Langsdorf added that he’s already seen an improvement from Reyna, just a few days after the game.

In addition to working on the game plan, it’s the decision-making that’s at the forefront, with Langsdorf saying they’re “making sure we just don’t try to do too much and stay within a play and taking what they give us – not trying to overthink it.”

It wasn’t as if he played poorly against the Trojans. He was inconsistent, to be sure, and the mistakes were apparent. But he put the team on his back in the fourth quarter and nearly completed the comeback.

The glaring number against USC was his completion rate, sitting at a stifling 48.7 percent. Yet, he finished four quarters at the Coliseum with 256 yards and two touchdowns.

Reyna also ran for 88 yards against the Trojans – some were designed, others came when the play broke down.

Langsdorf said he liked what he saw from Reyna with his ability to pull the ball down and run, but it’s OK to throw the ball away at times – which is something they’re working on in practice.

The most important thing for Reyna is simply playing games and getting in the live reps, Langsdorf said.

“He’s going to be a guy that’s going to gain so much from experience of just playing,” Langsdorf said. “He hasn’t had a lot of game reps, so I think those are valuable – a lot of teaching points from the game that he can learn from.”

If anyone on the team is poised for a big jump from Week 1 to Week 2, it’s Reyna.

At any rate, Reyna will be ready to take on the Golden Gophers in Bulldog Stadium, and he is excited to have home-field advantage.

“I’m excited for the Red Wave to come out,” Reyna said. “We want to sell this house. We want to make it full. We want to make it difficult on Minnesota. Thankfully, we have Bulldog weather coming this weekend. Hopefully we have the fans that give us the extra advantage for our first start in Bulldog Stadium.”