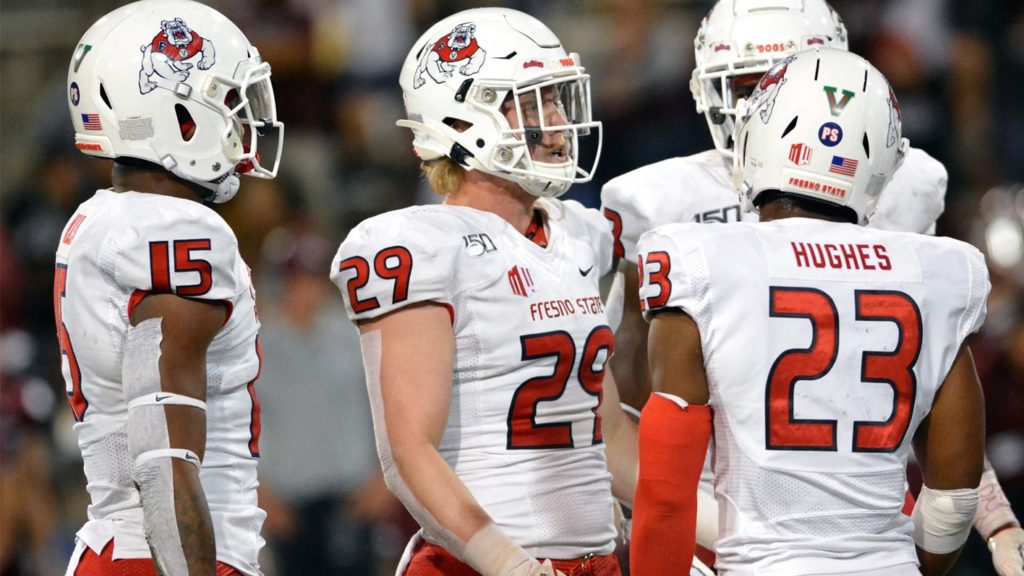 The Bulldogs wrapped up the season with a 17-16 loss to San Jose State last Saturday, putting the finishing touches on a 4-8 season that Fresno State fans would like to forget.

Even though the ‘Dogs were a long ways from repeating as Mountain West Championships, there were some individual standouts that deserve to be recognized.

Here are my picks for some of the typical postseason awards:

It’s tough to anoint an MVP on a 4-8 team. I went back and forth on this, but in the end I gave it to Hughes because I think Fresno State would have missed his presence more than anyone else.

He produced at the high level that we’ve come to expect from him. The senior captain and three-year starter anchored a secondary that dealt with injuries and inconsistency. Hughes was third on the team with 80 tackles, and he tied for the lead with 8 passes defended and 2 interceptions.

Fresno State’s pass defense was a far cry from the previous two seasons, but it would’ve been in a far worse position if he wasn’t there.

Hughes was also one of the most important leaders on the team. I don’t think Evan Williams or Randy Jordan could’ve come on as true freshman without Hughes supporting them and leading by example. He was always one of the last players to come off the practice field every day and is someone that young players should strive to emulate.

I’m sure many fans don’t think Reyna belongs anywhere near a discussion for MVP, but the offense would’ve been exponentially worse without him. Clearly, none of the young backup quarterbacks could’ve come close to producing like Reyna did, at least that’s the message head coach Jeff Tedford sent last week.

Backup Ben Wooldridge came on in relief of an injured Reyna. Seeing how they lost by only one point, the Bulldogs would have won if they scored, but Wooldridge wasn’t given an opportunity to throw downfield. Clearly the coaching staff didn’t trust anyone but Reyna this year, which made him very valuable.

Rivers was the best player on offense, but I think Hughes had a greater overall impact on the team. I didn’t actually consider Cropper for this award, but he deserves recognition because he changed the offense simply by getting on the field – more on him later.

Offensive Player of the Year – Running back Ronnie Rivers

Rivers was very solid this year and was one of the few consistent bright spots on offense. The junior led the ‘Dogs with 899 rushing yards and 13 rushing touchdowns. He was also the second-leading receiver. For all the injuries to the offensive line and the rotation at wide receiver, Rivers was the consistent force that the Bulldogs needed this season.

He got off to a slow start – outside of the Minnesota game – but midway through the season he evolved into one of the top running backs in the conference. Rivers ran for 595 yards and 9 touchdowns in the final six games.

Reyna is noted here for the same reasons above. You can’t exclude the QB from this conversation. He didn’t live up to the storied history Fresno State has at the quarterback position, but he was one of the few constants on offense.

Pope finished as the leading receiver and was Reyna’s most consistent target. He was the only receiver to catch a pass in every game.

It always seemed to be right place, right time with Rice this year. He led the team with 112 tackles, had 8 tackles for loss and had 3 sacks. Rice also had 2 interceptions, 8 passes defended, 4 fumbles forced and 2 fumbles recovered, including one that he returned for a touchdown.

He was the most consistent performer for the ‘Dogs on defense. He had 10 or more tackles in eight games, and his performances against USC and Minnesota were the best of any defender all year.

He wasn’t perfect, but he had the best all around season out of anyone on defense and was one of the most impactful linebackers in the Mountain West. He should land on an All-Conference team.

I think Walker would’ve been the best player on the team had the coaches left him alone at defensive end. He was one of the best edge rushers in the conference last season, but he split his time at linebacker this year. He still put together an excellent season, but Rice simply had a better year.

No surprise here. Cusick had another excellent season and was one of the best punters in the country. He averaged a career high 42.48 yards per punt, but that would’ve been a couple yards higher if he didn’t have to punt 8 times in poor weather last week in San Jose.

No one challenged him or stood out on special teams. Kicker Cesar Silva missed 9 field goals and the Bulldogs’ kick returners would’ve been better off calling for a fair catch every time.

Every time he had the ball, Cropper was a threat to take it to the house. He was the most exciting Bulldog, and you just can’t help but think the team would’ve won more games if he had more touches.

Cropper ran the fly sweep to perfection. He ran for 343 yards and 3 touchdowns, and he added 196 receiving yards. He even threw a perfect touchdown pass against Hawaii on a trick play.

Even when he didn’t get the ball he had an impact on the offense. He was often used as a decoy on the fly sweep which opened up holes for Rivers between the tackles.

He suffered an injury midway through the San Diego State game which knocked him out for the last two games. He was sorely missed and easily could’ve been the difference for the ‘Dogs in those close losses.

Bailey and Williams both shined at different moments this season and look like they’re shaping up to be the next stars on defense. Bailey proved in Week 2 against Minnesota that he’s more than capable of playing as a freshman, and he recovered a fumble and had an interception against UNLV.

Williams burst onto the scene against Hawaii when he got his first collegiate start. He had 9 tackles and 1 interception on the islands and was named the Mountain West Defensive Player of the Week. He started the remaining 4 games of the season.