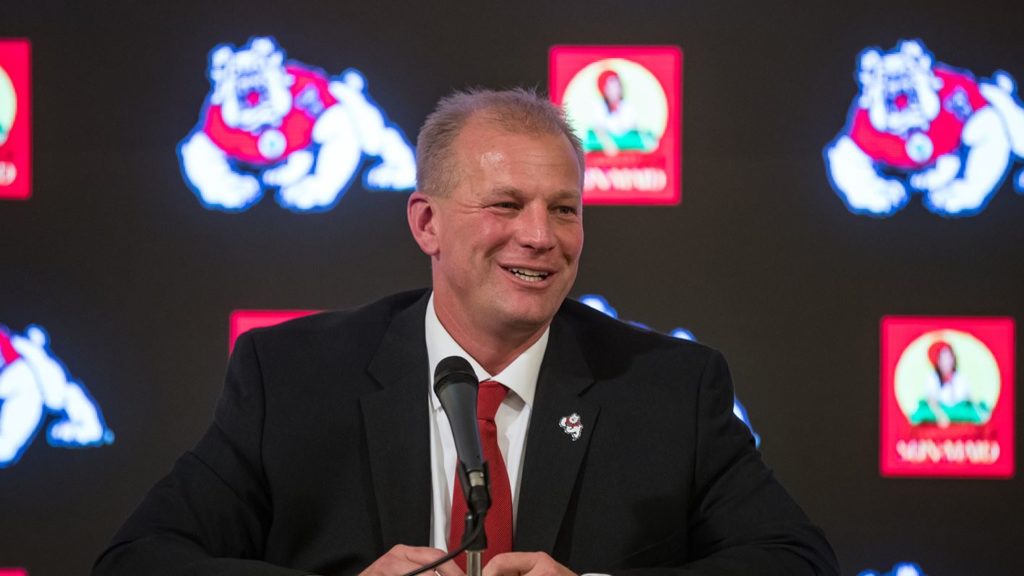 Game week is here, and even without any fans in Bulldog Stadium come Saturday when Fresno State faces off against Hawaii, the Bulldogs are ready to kick off the coronavirus-delayed season with the goal of putting last year’s 4-8 record in the rear-view mirror.

Kalen DeBoer will take the field for the first time at Fresno State’s head coach, and longtime coworker and friend Ryan Grubb returns as offensive coordinator and play caller, his second year in those positions.

When asked what he thinks Fresno State’s style of play will be on offense this year, Grubb said “explosive.”

“We want to stretch every inch of the field and show that we’ve got the guys to win in a lot of spaces,” Grubb said. “And we want to be detail-oriented as well, which has been one of the challenges with this little practice and no spring ball.”

With Haener being a quick decision maker, as Grubb said, the new face of the team – and team captain – will have a number of explosive wideouts working to get open and make his life easier.

Wideouts Keric Wheatfall and Jalen Cropper top two of the starting spots on the depth chart, with Chris Coleman and Josh Kelly listed as splitting the third spot. Wheatfall worked through some injuries last year but excelled as a deep threat, averaging 18.1 yards per reception.

Cropper, a fan favorite and Buchanan High School graduate, made an impact early on last year specializing in the fly sweep as his receiving game developed throughout the season, and DeBoer said he has evolved as a player heading into the 2020 season.

“We see the fly sweeps he ran last year and how explosive he was that way, but I think now you’re seeing him feel comfortable catching the ball,” DeBoer said. “It can be a simple hitch, but it’s a lot of things where he’s on the run is really what you’re trying to do – crossing routes, deep balls, down the field posts – things where he can continue to utilize his speed and once he’s by you there’s no way you’re catching him.

“I just think his development and the skill he’s developed as a receiver is something that’s different from last year for sure. His confidence certainly shows that.”

However, the wide receiver group is already dealing with an injury. Last year’s leading receiver Zane Pope is not listed on the depth chart, and Grubb said they are working to see if he will be able to play Saturday.

Senior Juan Rodriguez will line up at tight end, and although he played in 11 games last year – hauling in 5 catches for 42 yards – his path to the field had been blocked by Jared Rice and Cam Sutton.

At the other skill position spot, running back, the Bulldogs are loaded with Ronnie Rivers and Jordan Mims bringing a solid one-two punch.

Rivers was the best player on offense last year, combining for 1,251 yards from scrimmage and 16 total touchdowns. Mims was injured last year, but rushed for over 1,000 yards total in his first two years at Fresno State.

“I think what Dante brings is a good amount of athletic ability as well as size for a young guy, he’s almost 310 pounds and still moves really well,” Grubb said. “That was kind of one of our decisions, was that Dante we felt like had the ability to be powerful, but at the same time move his feet and stay in front of things as far as pass protection’s concerned. Bright kid.”

Moving over to the other side of the ball, although new defensive coordinator William Inge is installing the new 4-2-5 scheme with a young group – only six starters are juniors or seniors – he expects to play a consistent, aggressive and attacking brand of defense.

“Consistent in how we apply all of our fundamentals, aggressive in being able to go after the football and what we do on the quarterback, running backs and making sure we can just be attacking,” Inge said. “When the ball is in the air, it has to belong to us.”

Senior Kevin Atkins anchors the defensive line after an all-conference performance last season leading the team with four sacks. Alex Dumais will handle the other tackle spot, and Kwami Jones and David Perales are set on the ends.

Perales sat out last season after transferring from Sacramento State, but Jones thinks big things are in store this year for the pass rush with Perales.

“I’m so excited to play on the other side of him,” Jones said. “He’s an amazing pass rusher. His hands are amazing. He has one of the best reaction times ever seen, and he’s explosive off the ball. He knows how to read the quarterback and tackle as well.”

Inge added, “We can expect him to be a very good pass rusher, someone who can be able to get the quarterback off the spot and make him feel uncomfortable. The one thing that we love about David is his work from January to now, is how his mindset has evolved into him being and wanting to be the guy on the edge.”

Senior Arron Mosby returns at linebacker and will line up next to either redshirt sophomore Jacob Hollins or redshirt Freshman Malachi Langley, two players that Inge has been very impressed with throughout fall camp.

Sophomore Levelle Bailey stepped up last year as a linebacker, and now he moves over to the “Husky” position in Inge’s 4-2-5 defense, acting as a linebacker/defensive back combo.

The secondary group is young, but sophomore Evan Williams came on strong last year at safety and has been called a “defensive general” by Inge and was also named a team captain.

“The thing that everyone has relied on with Evan is his leadership, his attitude, his ability to get people together, and that’s exactly what you want in leaders,” Ingel said. “The No. 1 quality of a leader is being able to influence and help the team unit accomplish the mission, and he’s been able to be one of the best guys who can help us be able to do that thus far.”

Redshirt freshman Bralyn Lux takes over one cornerback spot, while junior Wylan Free moves back to corner after playing safety last season. The other safety is senior Deonte Perry, who converted from running back.