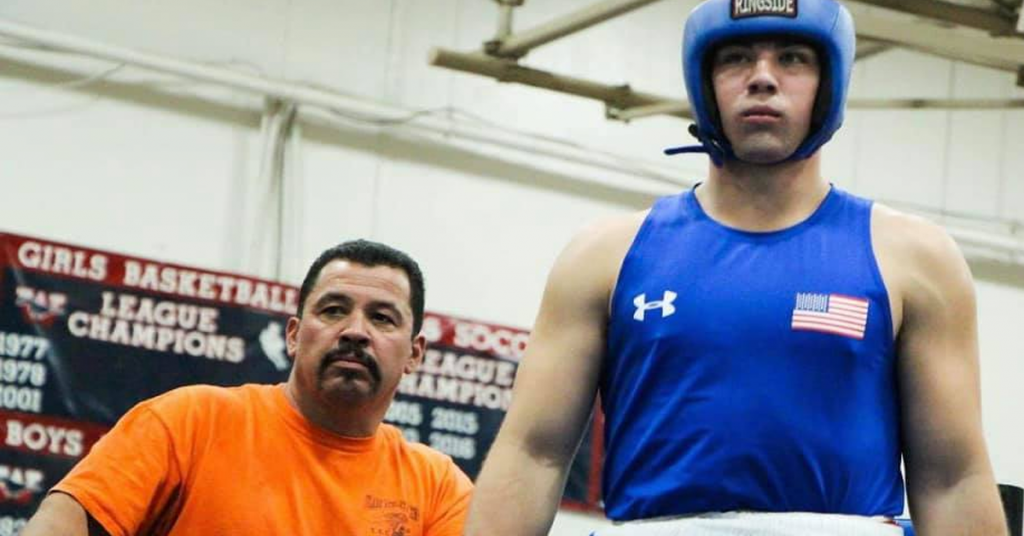 After fighting through the gauntlet over the past two weeks, Tulare’s Richard Torrez Jr. has an opportunity Saturday night to do something no American boxer has done in more than 30 years: Bring home an Olympic gold medal in the super heavyweight class.

It’s been two weeks full of nonstop action for Torrez Jr. The 6-foot-2 pugilist took out three opponents with relative ease, including a technical knockout in the second round against Kazakhstan’s Kamshybek Kunkabayev to advance to the championship.

While Torrez Jr. has been spending the last two weeks living a 70-plus year family dream, his parents – Kimberly and Richard Torrez Sr. – have had a tense experience watching him put his health on the line in the ring.

Even though there have been various watch parties throughout Tulare to celebrate Torrez Jr., Torrez Sr. politely declined those invitations, choosing instead to stay home with Kimberly and their daughter.

“It’s nerve-wracking for my wife. My wife’s in there and she’s biting her nails. He wins and she starts crying, ‘He did it, he did it. He’s safe, he’s good.’ After every fight he calls us, and you’ll see in the ring – he’s done it the last three times – every time he’s on TV and he’s in the ring, he’ll look around like he’s lost, almost,” Torrez Sr. said.

“I’ll ask him, ‘What are you doing?’ He says, ‘I’m looking to the camera because I want to point at it.’ That’s our little sign. He’s pointing at me saying, ‘I got it,’ or he’ll say something nice to the camera: ‘I love my family, thanks mom and pops.’ That lets us know that he’s alright. Being at home so far away from him, it’s nerve-wracking, terrible. I wouldn’t want to be anyplace else but there, but I have to deal with what I have to deal with.”

As stressful as it has been for Torrez Sr. and the family to watch the matches from the other side of the world, that intensity will only be increased come Saturday night.

Torrez Jr. will face off against his chief rival: Bakhodir Jalolov, a 6-foot-7 behemoth from Uzbekistan.

The last time the pair met in the ring was in 2019 at the AIBA world championships in Russia. That fight ended with Torrez Jr. stretchered out after Jalalov landed a brutal punch that knocked him out.

“It’s a brutal sport. We’re going to go out there and give it our shot to do damage to him. I understand what’s entailed, and we’re nervous. Who wouldn’t be? He is a big guy, he is a guy that had put the hurt on my boy one time before,” Torrez Sr. said.

“You’ve just got to deal with it and push forward. My wife, she’s nervous. Everybody who knows my kid is nervous. They can’t see how he’s a fighter and be so nice. We’re working through it. I call my boy up and we start talking strategy in fights. We laugh a little bit, talk about things we need to do, and we’re just getting prepared mentally, physically and emotionally for the big fight.”

No matter what happens Saturday night, Torrez Jr. is guaranteed to return home with at least a silver medal, an achievement that surpasses the dreams of Torrez Sr. and his father Manuel.

“It’s amazing that a small town boy – I remember him running around without his shoes and shirt and me scolding him to get inside – he’s got a silver medal. It’s a guaranteed silver medal. If you talk to him he’ll say, ‘I came here for a gold, not any medal – just gold.’ So it’s amazing,” Torrez Sr. said.

“It’s still kind of surreal because I have to step back. You hear the stories when you’re growing up of Bob Mathias, Sim Iness – they’re on the wall. They’re legends for what they accomplished. Just to think our son’s at that level now, it’s hard to take into consideration to grasp. It’s still sinking in.”