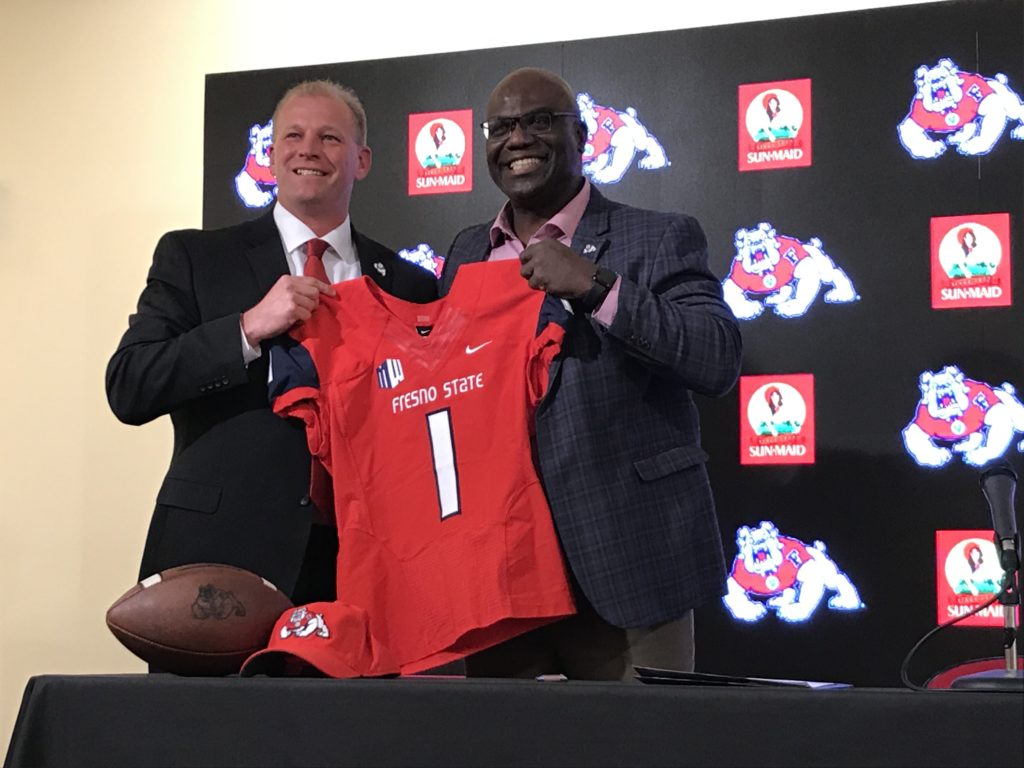 Just one day after Fresno State introduced Kalen DeBoer as the new head football coach, 12 recruits signed National Letters of Intent on Wednesday to play for the Bulldogs.

The early signing period started Wednesday and will run through Friday. Recruits will not be able to sign until National Signing Day on Feb. 5, 2020.

“The staff did a great job of keeping the group together,” DeBoer said in a press release. “We weren’t going to have a big group no matter how it came about, just because there’s only so many spots that we have to fill right now. But the staff did a great job of putting on a great weekend this past weekend, and I feel really good about the guys we have coming in to be a part of our program. I can’t wait to meet them, I’ve watched their film and heard a lot about them, had a chance to talk to them all on the phone last night. But I can’t wait to meet them in person.”

The other players from the Valley are quarterback Logan Fife from Tracy and linebacker Tyler Mello from Hanford.

Here’s a full list of the recruits and comments from associate head coach and offensive coordinator Ryan Grubb:

“Fife has a good arm, quick feet and he is athletic. He did very well here at our camp. He was extremely accurate and delivered the ball. He had great demeanor around Coach Tedford and the other quarterbacks. He has great intangibles. He is a great kid who can play the next play no matter how good or bad. We are really excited about him. He is a local guy and we knew he wanted to be here,” Grubb said.

“I am fired up about this guy. He is electric. There is nothing on the field he can’t do. You want to talk about high character, it’s him. You talk to this guy and he is phenomenal, he is a leader. When things break down, Malik can get you yards. He reminds me a lot of Ronnie Rivers. I couldn’t be more fired up about him. I think some people got scared of his size, but as he develops he will get really good. He is a high character kid, we can’t say enough,” Grubb said.

“The biggest thing with him is that he is very productive. It didn’t matter what role or grade he was in, he was a productive player. He always found a way to get open and get it done. In the end, you need a guy who will do that. Size doesn’t matter, he competes, and he is physical. Mac is truly a dog wired dude,” Grubb said.

“Lowe is a legitimate 6-5, 245 pound big, natural guy. He is going to be a great player in this league. He has all of the tools. They didn’t throw to him all the time in high school, but when they did, he made the plays. He is going to develop and be a big and powerful kid. He has unbelievable character and he wants to succeed. Again, a real dog wired dude and we are very excited about him,” Grubb said.

“Church is very raw, athletic and powerful. He is going to be a big kid with wide hips and quick feet. He was one of the most hidden offensive linemen in the state of California. I really believe that. Seeing his athleticism and raw power, he is extremely strong. He reminds me a lot of Syrus Tuitele out of high school. He will be physically different from a lot of kids. Joseph comes from an unbelievable family, high character. They committed to the feeling of family here and that came from our players,” Grubb said.

“Julian is massive. You watch his film and he is playing 170 snaps a game on both sides of the football. His feet are really good. I think he is going to be a good one on the inside at guard. He is a mid-year guy, he will have all winter to work with our guys and get in at spring ball. He is a fiery kid. Tough, physical and nasty. We are fired up about him,” Grubb said.

“Da’Marcus is a guy that we recruited out of high school, but some injuries led him to go the JC route. The coaches at American River College couldn’t say enough about him. He has a great demeanor and he has energy. He shows this is a big deal to him and he will be an impact in the Mountain West,” Grubb said.

“Mello, he is a local guy. He is a true inside linebacker. He is a physical kid, and he will strike you as smart. He is the kind of guy you want in your football program. You can’t say enough about him. We needed a good guy to come in and take that scholarship spot for when some of our older guys like Mosby and Rice are gone. We think he will fit that spot,” Grubb said.

“His dad played here, so getting a guy like CJ is a big deal. People will think about his father Charlie, but we recruited CJ for CJ. He is a phenomenal football player in his own. He was committed early and he stuck with us through this coaching transition. He is Bulldog proud and he is excited to be here, and we are excited to have him,” Grubb said.

“Kamron is very competitive. For a young guy, his coverage skills are outstanding. I know [defensive backs coach] JD Williams is very high on him and will get him to develop quickly. He was a fun kid to have on the visit, and we are excited to get him here,” Grubb said.

“A long corner that is super raw. He played a lot of receiver as a junior, then was exclusively at cornerback as a senior. He is a fluid athlete and the sky’s the limit for him. Physically, he has a skillset that is not common. We were super excited when he took his visit and he was super engaged in the process – he took it very seriously. He is competitive and he wants to be the best and play for the best,” Grubb said.

“We are signing him as an athlete because he is a guy we can see doing a ton of stuff on the field. He is a very high character kid from a great family. We see him in a lot of spots out there for us. Kosi is a good football player, and he is right in our backyard. We were not going to let him slip,” Grubb said.