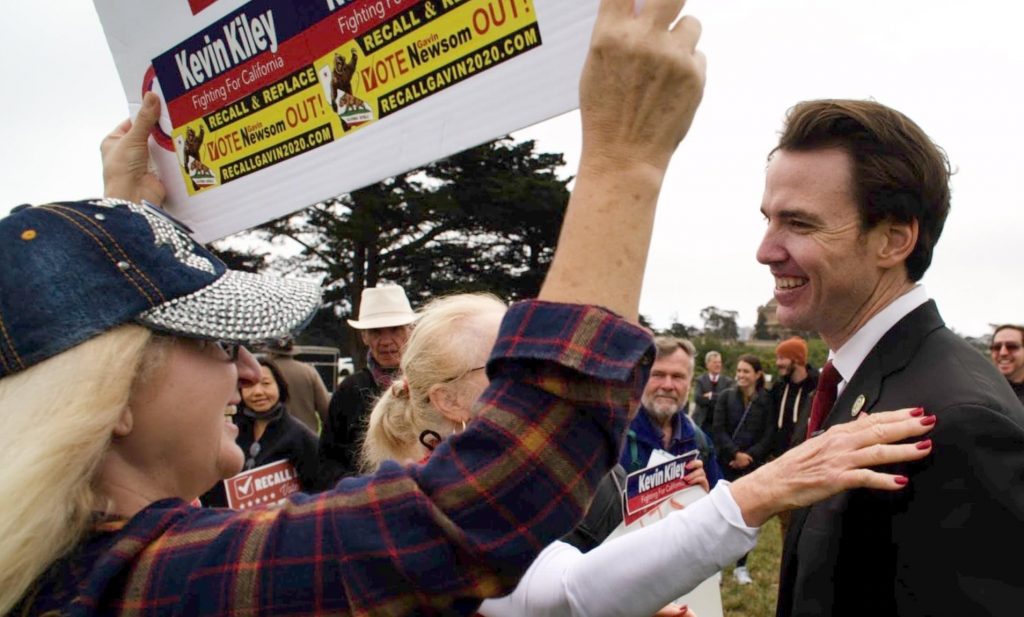 California gubernatorial recall candidate Asm. Kevin Kiley stopped in Fresno on Tuesday to promote himself as the contrast the state needs from Gov. Gavin Newsom.

Following the event, Kiley sat down with The Sun to discuss the recall, which is picking up steam according to a recent poll from the Los Angeles Times and Berkeley Institute of Governmental Studies.

The poll found that 47 percent of likely voters will support the recall while 50 percent will back Newsom.

“This is what I said was going to happen, because what we’ve seen is that the closer people are paying attention, the more they’re tuning in, the more likely they are to support the recall,” Kiley said. “So it stands to reason that as we get closer to the election, as more people start tuning in, it’s going to tighten up, and I think we have a good chance of then getting over the line.”

The poll has Kiley in fourth place with 5 percent of the vote, behind Larry Elder (18 percent), John Cox (10 percent) and Kevin Faulconer (10 percent).

However, Kiley noted that the poll was conducted only 12 days after he announced his candidacy, giving him hope that he will continue to pick up support before the Sep. 14 election.

“We hadn’t spent any money yet on large-scale voter contact, and we’re already sort of separated from the rest of the pack at the top four,” Kiley said. “We think we definitely have the momentum, and I’m seeing it everywhere I go. We think we’re in a good position.”

With the crowded field that is vying for Newsom’s seat, Kiley is focused on placing himself as a direct opponent of the governor and not the other candidates.

“I’m drawing all of my contrast with Gavin Newsom because I view him as my opponent,” Kiley said. “The other folks on the ballot, I view them as being part of the same team because we all share an interest in removing him.”

The legislator did note that his hands-on experience in the legislature puts him in position to tackle the state’s issues immediately.

“I’ve been at the Capitol now as a member of the legislature for five years. I’ve been trying to fight the corruption,” Kiley said.

“I’ve been trying to fight to turn our state around, and in the last 16 months I’ve been trying to fight Newsom’s one man rule in every way I can in court, resolutions, the county level, by introducing a resolution to terminate the state of emergency. So I know what exactly the problems are and how to go about fixing them, and I’d be ready to go to start doing that on day one.”

Kiley criticized Newsom for his response during the COVID-19 pandemic, which he called “an approach of government control to a greater degree than any state in the country.”

On Monday, Newsom announced that all state employees must either receive the COVID-19 vaccine or undergo weekly testing. The California State University system followed that up on Tuesday with its own announcement requiring all faculty, staff and students to get vaccinated. Kiley said he disagreed with that decision and thinks the university should leave it to individual choice.

“So the evidence is very clear that the governor’s approach has been a catastrophic failure, and yet here again he is with more government control as the solution. I think that we long ago became familiar enough with this virus to leave it to individual citizens to make their own decisions.”

To help the state survive through the drought, Kiley said he – as an assemblyman – is going to introduce a constitutional amendment that will allocate a fixed portion of the general fund annually to water storage and water infrastructure projects.

“We’ve long been promised this is going to happen, but very little has actually been built,” Kiley said. “That will provide us with the capacity to ride out the cycles of wetness and dryness that are endemic to California’s climate.”

As governor, Kiley said he would undertake a systematic review of all regulations that have been issued from state agencies that interfere with productive water use.

“A lot of these things that are done supposedly in the name of the environment don’t do any good, and yet farmers – and as we’re seeing now even urban indoor users – are paying the price,” Kiley said.

On the homelessness crisis, Kiley criticized Newsom and the legislature for adding $12 billion to the budget for homelessness issues.

“We spend an extraordinary amount of money on homelessness,” Kiley said. I actually requested an audit of all the homelessness spending last year as a member of the legislature. There was a poll showing 90 percent of the public supported my audit. Try getting 90 percent of the public to agree on anything, and yet Gavin Newsom’s administration intervened to stop the audit.”

His plan is two-fold: ensure that there is enough shelter for every person living on the streets and then provide the necessary services to help them get on their feet, such as mental health counseling, substance abuse treatment and job training.

“This isn’t brain surgery,” Kiley said. “We can look at what’s worked in other states, and we can actually start doing it here. Gavin Newsom’s approach just to throw in more money, maybe give someone a hotel, don’t give them the help they need – there’s no evidence that that works.”