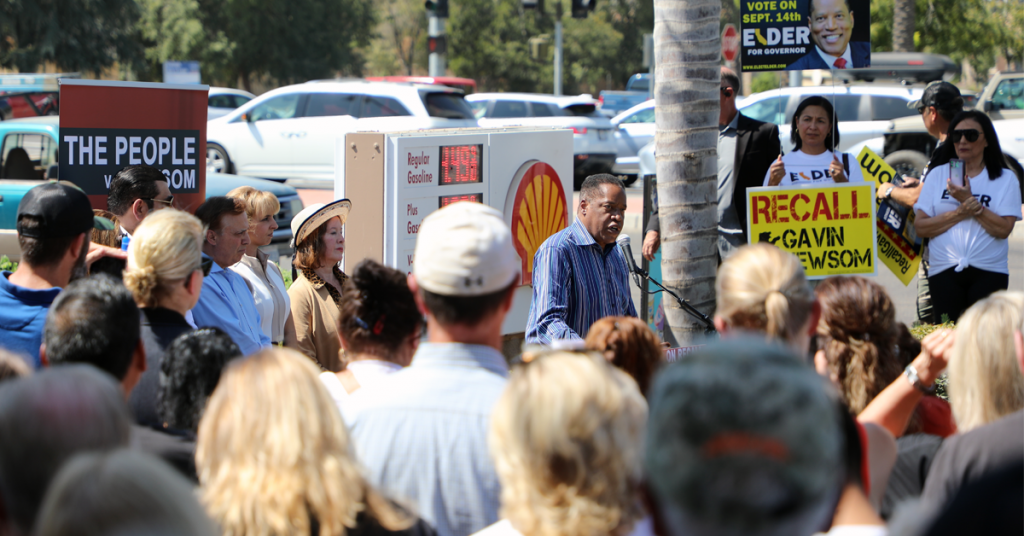 With seven days to go before polls close on California’s second gubernatorial recall election, leading GOP contender Larry Elder blitzed the Golden State with stops in southern California and the Central Coast along with a stop in Clovis in the middle.

“Clovis, say hello to the Black face of White supremacy,” Elder joked to a booming crowd of four hundred, quoting a line from Gov. Gavin Newsom and The Los Angeles Times.

The crowd, which brought pumps serving gasoline at $4.49 per gallon to a halt, cheered over their collective exhaustion with California’s sky-rocketing cost of living led by – you guessed it – gas prices.

For Bredefeld, the state’s 67 cents per gallon gas tax and the soaring cost of living were just another side effect of Newsom’s approach during the coronavirus pandemic.

“Today, we would be in the purple tier – today,” Bredefeld added. “The only reason why we’re not locked down is because of the threat of the recall.”

Elder, who stuck to a tried-and-true stump doubled down on the state’s out-of-control costs for average Californians forcing the state’s first-ever exodus resulting in the loss of political sway via the 2020 Census.

Newsom’s pandemic-era policies, and their continued hangover, have dragged down the state’s economy, the talk host argued.

“A third of all small businesses have been shuttered forever,” Elder said. “One of the many things that I bring to the table is that I ran a small business.”

“Many of the businesses that are still open can’t find employees because we are paying employees not to work.”