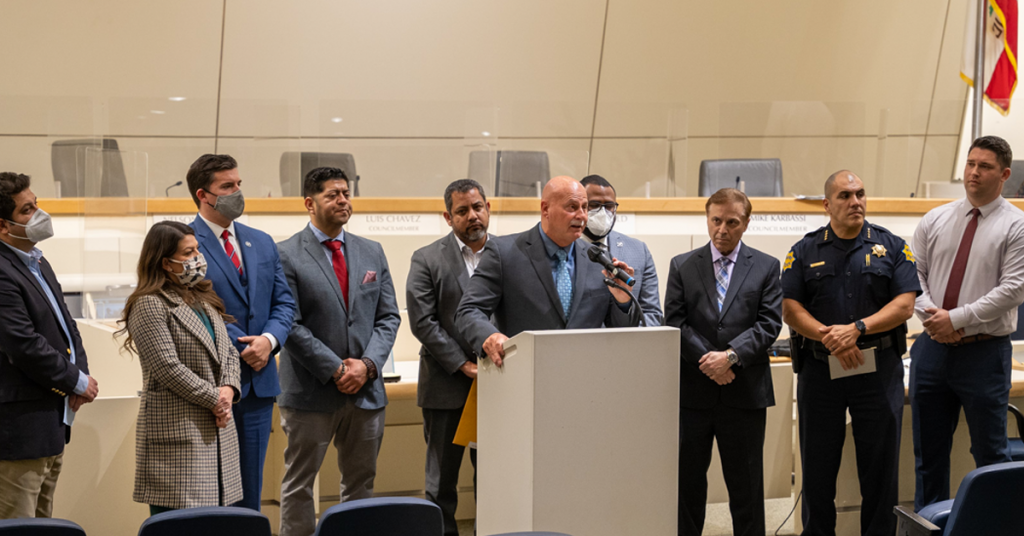 Fresno’s police officers finally have a new contract with the city, ending a seven-month dispute as the city agreed to a new deal on Thursday with the Fresno Police Officers Association.

The new deal comes just a couple weeks after the FPOA soundly rejected a previous proposal from the city, setting the stage for the two sides to meet on more equitable ground. That rejection was mostly based on compensation and shift scheduling.

After that vote, FPOA leadership started discussing the possibility of declaring an impasse, which City Council President Nelson Esparza pushed the city into a higher gear to negotiate a deal.

“If we rewind two weeks ago and sort of the full court press that occurred about 14 days ago or so, we were not in a good place, and it took everything we had to take the ship and steer it in a very different direction from where we were headed,” Esparza said. “There were words being tossed around – that I didn’t like – very loosely, namely ‘impasse.’ And I knew when I became president that was somewhere that we could not go as a city, somewhere our department couldn’t go. So we rolled up our sleeves and really went to work.”

Mayor Jerry Dyer revealed that the officers supported the new three year deal Thursday at a 96 percent rate, which was then approved unanimously by the city council.

The deal makes the Fresno Police Department the highest paying department in the Central Valley, which Dyer anticipates it being a major recruitment tool as the department grapples with filling 76 vacancies.

Police Chief Paco Balderrama said the deal will allow the department to be competitive in its recruitment efforts and will allow more officers to be added once the vacancies are filled.

The deals for management and rank-and-file officers provide three years of 3 percent raises, dating back to the June expiration of their previous contract and concluding in 2023.

The deal removes the first two existing compensation tiers for new officers – titled the “A” and “B” tiers – allowing recruits to start at a higher salary.

Dyer said the entry level compensation will be $950 more per month than the current starting tier sits.

The deal also adds two new pay tiers at the top end of the compensation spectrum, with the new top tier kicking in in June 2023.

Dyer said the officers who are at the highest tier will receive nearly $21,000 more per year compared to the current structure.

In addition to the pay raises, the deal will shift out the current scheduling system, called the “matrix,” and replace it with the “transfer portal.”

“We came up with a compromise that the matrix would be slowly phased out, and we would allow officers to transfer through the transfer portal throughout the year. Right now it’s very limiting. They can only move around once a year. But what I’m trying to create is I’m trying to create a better system. That’s my job as police chief is to make things better and keep some consistency in our workforce,” Balderrama said.

“I happen to believe that officers who are invested in a certain shift in a certain part of town in a certain community tend to perform better because they know the neighborhood. They know the store owners, the people who live there. They know about the troubled spots. So in order to better serve our community I want that consistency especially in the patrol shifts, so that’s something that the FPOA worked with me.”

As an example, Balderrama noted that the current matrix simply places new hires in the current vacancies on the schedule, not allowing senior officers to transfer at any time of the year to a more desirable shift.

FPOA Vice President Jordan Wamhoff said the officers are very proud of the contract and are grateful to reach a deal after seven months of negotiations.

“This is a big first step in making Fresno PD the premiere law enforcement agency in the Valley, and this is a great big step in rebuilding our department to where it needs to be to keep this community safe,” Wamhoff said. “This contract makes our officers feel valued. It makes them feel appreciated by the city, the community, and it lets all of our officers know that the sacrifices that not just they make, their families make, makes them appreciated and valued.”