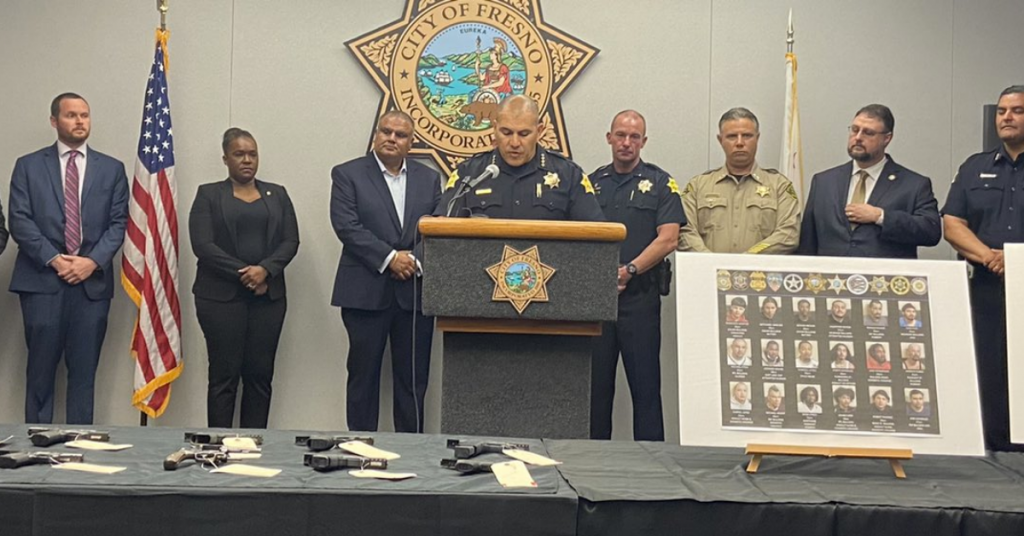 The streets of Fresno and Clovis are on the safer side after a two-week intensive police operation recently concluded.

Monday, the Fresno Police Department joined together with various other law enforcement agencies to announce the conclusion of “Operation Safe Neighborhoods,” which ran from May 9 to May 22 and targeted street violence and offenders.

Fresno Police Chief Paco Balderrama noted that the 24.3 percent decrease in shootings and 32 percent decrease in homicides in Fresno this year is largely due to the proactive partnerships with local, state and federal agencies in operations such as this one.

“I can see the light at the end of the tunnel because violent crime is going down, and I believe that 2022 is going to be much better than the last two years, which were really bad as far as violent crime and stats,” Balderrama said.

Balderrama said the police department seized 1,549 guns in 2020 and 1,931 in 2021. So far this year the department has recovered 772 firearms, including 136 firearms that are considered “ghost guns” – guns that are privately-constructed and lack a serial number.

One individual who was arrested as part of the operation was Joseph Gonzales, a 26-year-old gang member who was wanted for a shooting.

Gonzales was also picked up with a ghost gun, which Balderrama said was likely built from parts ordered online and “put together in somebody’s garage.”

“This firearm right here is very typical of what we’re finding on gang members. Convicted felons can’t walk into a gun store and buy and purchase a firearm, but they’re going to find other ways to get their hands on them,” Balderrama said.

“That includes breaking into somebody’s house and stealing one. It includes buying the parts online, getting them shipped here and putting the gun together. That includes using a 3D printer to print some of the parts and then assemble it with other parts that are found online.”

Balderrama said that while crime is headed in the right direction in Fresno following the last few years that were plagued with violence, “we’re not where we need to be.”

“I really want to stress that common sense laws in our state that hold violent criminals accountable are necessary, because what I’ve learned in my experience is that people if they’re not motivated by consequences are not always going to do the right thing, and we need to keep our community safe,” Balderrama said.

Balderrama later added, “Our community’s starting to get fed up with violent crime, with brazen crime, with people walking into CVS stores and crimes like that just brazenly in broad daylight stealing things because there’s no accountability. I think a lot of people in California are starting to get fed up with that. And they know that it takes more legislation to hold people accountable, but it also takes more opportunities for our young people so they don’t have to turn to a life of crime.”