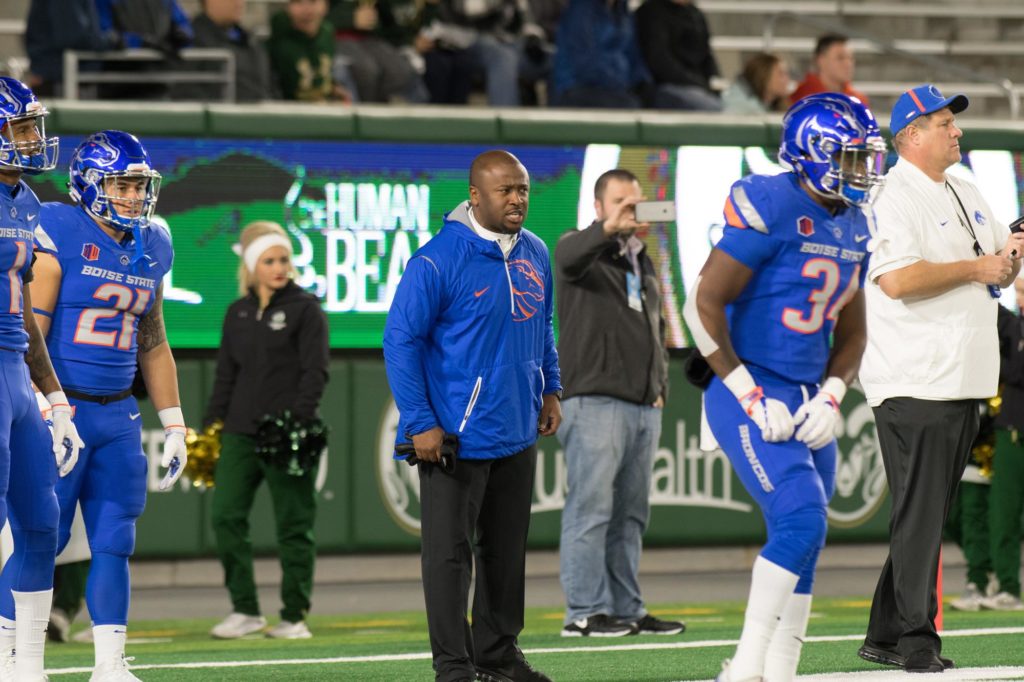 Lee Marks was as ingrained in the Boise State community as anyone. He played running back for the Broncos from 2001-2005 and was named team MVP his senior season.

Marks joined Boise State’s coaching staff in 2014 as the assistant strength and conditioning coach. In 2015, he became the running backs coach, and he added special teams duties in 2019.

In his five seasons in charge of running backs, the Broncos had a 1,000 yard rusher every year.

Marks was a Bronco through and through.

But when he heard that Kalen DeBoer was hired as the head coach at Fresno State, he thought that it might be time for a change.

“Change is always good, because it helps you grow as a person,” said Marks in a teleconference with reporters Thursday. “This is a tremendous place with a lot of history, a lot of great players, a lot of great coaches. To be a part of this, in my career, I felt like it was not only the right move for me at this time, but I’m excited to be here.”

Marks and DeBoer have never previously worked together, but their paths crossed at the University of Sioux Falls for the first time. After five years and three national titles with the Cougars, DeBoer left Sioux Falls after the 2009 season to pursue a bigger opportunity. Marks joined the Cougars in 2010 as a graduate assistant.

“The first time I met him, he’s walking through the offices at Sioux Falls, and I got a chance to shake his hand and just say hello to him,” Marks said. “And I heard stories about him coming into that program, just the things that he’s able to accomplish while he was there.

“And the first time you meet him, you just sit there and go, ‘Man, wow, this is a nice guy. This dude is just a good person.’ You just get a good vibe from him. He just had a smile on his face. He said, ‘Hey, I’ve heard a lot about you as well.’ So you just knew that he was very genuine, and you just really wished him well.”

While Marks was at South Dakota State and DeBoer was at Southern Illinois, the two teams were getting ready to play each other one Saturday in November 2012. Before the game, the two coaches took some time to catch up with each other.

“Him and I are just having a conversation, and we’re getting ready to go into battle against each other,” Marks said. “And it was just like, ‘You know what? If I ever have a chance to work with this guy, I would really love that opportunity.’”

After DeBoer landed back in Fresno, Marks figured he would get a call to talk about joining the ‘Dogs. DeBoer called him, and Marks decided to make the jump.

However, considering his history with the Broncos and head coach Bryan Harsin, leaving Boise State was far from an easy decision.

“That was a very very very tough conversation [with Harsin],” Marks said. “We talked definitely well over an hour the first time. Second time wasn’t quite as long, because I basically told him that I was going to be a Bulldog. He was definitely disappointed.

“He told me his thoughts, but at the same time he also was very supportive. And what everybody kind of says – once you’re here, especially graduating from there, I’ll always be a part of that program. But it’s time to be a part of a new program, and him and I definitely talked about that. And I have a ton of respect for Coach Harsin and want to thank him for everything he’s done for me and my family.”

With the additions of assistant head coach and run game coordinator to his title, Marks has taken a step up in terms of responsibilities. His new duties include helping with scheduling, finding better ways for the program to interact with the community and an increased role in planning the run game, Marks said.

He doesn’t have to build from the ground up with his position group, though. Ronnie Rivers returns for his senior season, following his performance last year that earned him second team All-Mountain West honors.

If Marks can get the best out of Rivers, then the Bulldogs will have a chance at unseating Boise State as the best team in the conference.