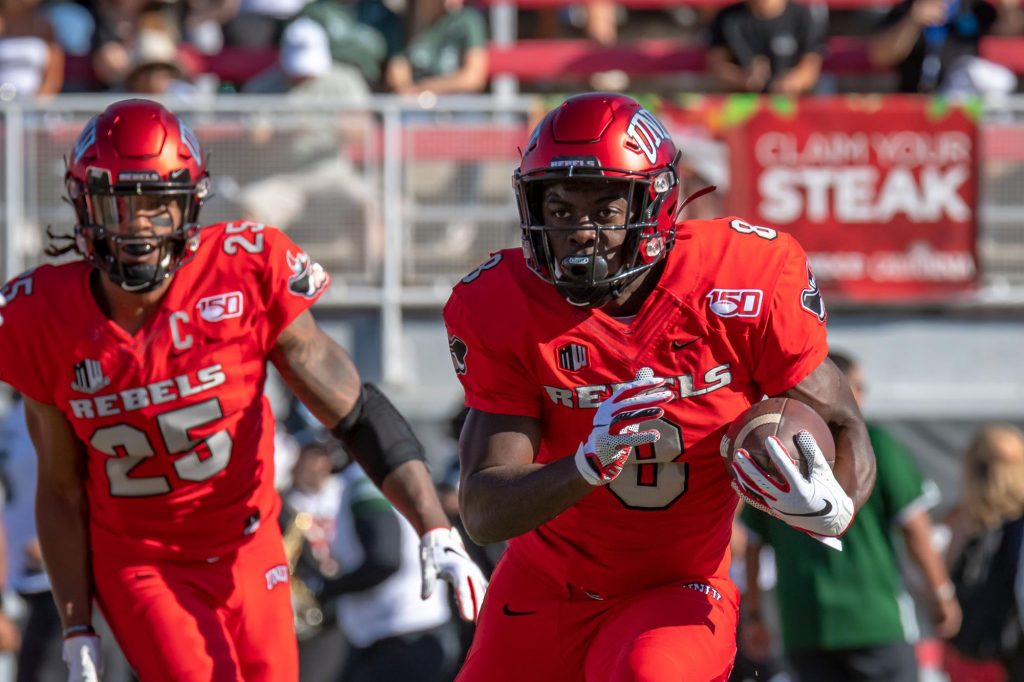 Even though UNLV has limped out the gate to an 0-2 start, the Bulldogs will find themselves in hot water Saturday in Las Vegas if they don’t contain Rebels running back Charles Williams.

Williams is a Fresno native and starred at Bullard High School before signing with the Rebels, and his stats against the ‘Dogs over the years show that he ups his game when he faces his hometown team.

As a true freshman in 2016, Williams gouged the ‘Dogs for 153 yards and 1 touchdown, averaging 8.5 yards per carry in the win over Fresno State. It was the first 100-yard game of his career and his best performance of the season.

He missed most of 2017 with an injury, but bounced back the following year to put up 121 rushing yards against Fresno State – which turned out once again to be his best performance all year.

Last year was Williams’ worst performance against the Bulldogs, although he still managed to rack up 82 rushing yards and 25 receiving yards.

While his 2019 performance against Fresno State didn’t equal what he did in the first two matchups, his overall season placed him atop the Mountain West with 1,257 yards on the ground. He was also named to the All-Mountain West First Team after the season.

Add in the fact that UNLV’s leading receiver from last season Randal Grimes – the brother of former Bulldogs basketball player Nate Grimes – was suspended for the season on Tuesday, and everything revolves around Williams.

“Certainly he’s always going to be motivated to play us, and he’s a great player,” said Fresno State head coach Kalen DeBoer on Monday. “He’s shifty. He’s not just elusive, but packs a punch, has explosiveness both physically and also down the field as far as popping the big ones.”

While DeBoer has seen Williams first hand from his previous coaching experience as an assistant at Fresno State, defensive coordinator William Inge will face the UNLV running back for the first time.

“The one thing that we see is he is a dynamic running back, and he is someone you want in your football program,” Inge told reporters Wednesday. “And I think that they’re doing a great job of being able to try to get him the football in multiple ways, whether it’s running the football, whether it’s getting him involved in the pass and the throw game.

“He is someone you want in your organization, and I’ve been very happy and respect his football game as a player, coming from a coach. You’ve got to know where he is on the football field.”

As the Bulldogs are preparing to face Charles Williams, they are coming off a win against Colorado State in which running back Ronnie Rivers dominated, flashing his versatility with 95 rushing yards, 69 receiving yards and 3 total touchdowns.

Offensive coordinator Ryan Grubb offered Rivers some high praise Tuesday when asked about how his versatility helps the team, calling him the “gold standard.”

“That’s how we recruit the running back position, honestly,” Grubb said. “I can’t speak names, but just telling you some of the guys that we’ll be signing in December – we use Ronnie as the gold standard.”

Freshman linebacker and Hanford native Tyler Mello is off to a good start with the Bulldogs. He made 4 tackles in limited playing time against Colorado State, including on special teams.

As Mello is adjusting to the college game, Inge said that he has already earned himself a nickname due to his Hanford roots: “the ice cream man.”

“I think the biggest reason why he’s a fan favorite is being from Hanford – the home of Superior Dairy ice cream – everybody calls him the ‘ice cream man,’” Inge said. “That is one of the fan favorites.”