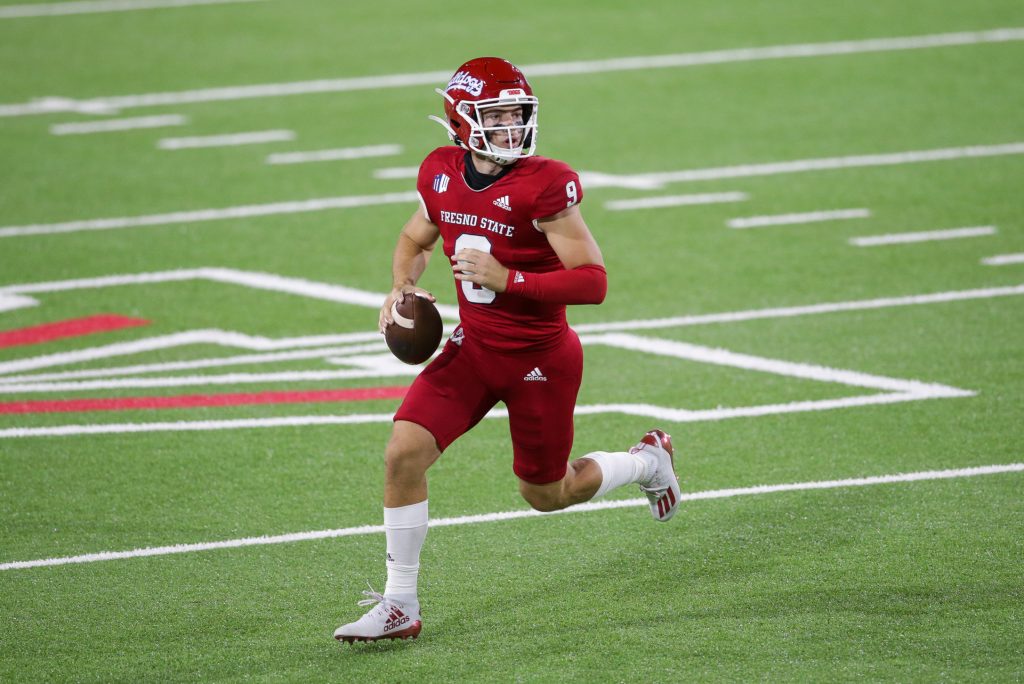 Backup quarterback Ben Wooldridge played in four drives in Fresno State’s 40-27 win over UNLV last Saturday. After the game head coach Kalen DeBoer said the plan was to bring Wooldridge in for a drive or two to get him into the game to gain some valuable experience.

However, DeBoer was impressed with Wooldridge’s drive in the 2nd quarter – which resulted in a Ronnie Rivers touchdown run – so he brought the backup QB back out near the end of the third quarter because he felt Wooldridge had the “hot hand.”

“With the success he had in both the Colorado State game and the first drive that he came in against UNLV, it definitely warranted an opportunity,” DeBoer said of Wooldridge during his weekly press conference Monday.

After last Saturday’s win, DeBoer reaffirmed his confidence in Jake Haener as the starting quarterback, despite Wooldridge’s extended playing time.

The head coach followed that up Monday saying, “I don’t like having it be where you have two quarterbacks that are equal. It’s Jake’s team right now. He’s the starting quarterback.”

It’s more so having two quarterbacks ready to go at all times, especially given the damage a potential COVID-19 breakout could do to player ability because of the Mountain West’s rules.

“They both know that they’re involved,” DeBoer said. “I don’t want it to feel like there’s a controversy or anything like that. It’s just having both of them ready, and I think it makes both of them more sharp knowing that they need to be on top of their game throughout the course of the week.”

DeBoer said that in 2017 as the offensive coordinator at Fresno State and in 2019 in the same position at Indiana, he became more comfortable using two quarterbacks throughout the course of the same game.

His first year with the Bulldogs is a poor example, because while Marcus McMaryion and Chason Virgil both shared snaps in the first three games, McMaryion took over in Week 4 and never looked back.

The better example that DeBoer called back to is his from lone year at Indiana. Hoosier quarterbacks Peyton Ramsey and Michael Penix split the bulk of the time, attempting 300 and 160 passes, respectively.

Although Penix was named the starter before last season, he dealt with some injuries and Ramsey finished out the last four weeks as the starter. When both players were healthy, however, DeBoer used both quarterbacks in the same game four times.

Barring any injuries, Haener is undoubtedly the starting quarterback and has DeBoer’s support and confidence, but Wooldridge has a role to play and should be ready to step in at a moment’s notice.

After a 4 touchdown performance against UNLV, Rivers was named the Mountain West Offensive Player of the Week Monday.

It’s the first time the Fresno State running back has received the honor in his career, and it comes after he was the most dominant player on the field, racking up 133 rushing yards and 99 receiving yards to go along with his four trips to the end zone.

This is the first offensive player of the week honor for the Bulldogs since McMaryion earned it twice in 2018, and Rivers is the first Bulldog running back since Robbie Rouse in 2012.

The Bulldogs have not faced any COVID-19 problems three weeks into the 2020 season. All players and coaches are being tested three times a week, per the Mountain West’s directive, and Fresno State has not revealed if any football players have tested positive for the virus.

DeBoer would not explicitly say that no players have contracted COVID-19, instead deferring to the university if the school would like to reveal any information regarding that.

But the coach did say Monday, “I can tell you it’s gone very well for us, and I knock on wood every time.”

DeBoer added, “Probably the biggest thing is I’m proud of the discipline the guys have. Are we perfect? No, but this entire team is very aware of how quickly the coronavirus can get into a football program. We talk about it daily, multiple times a day sometimes. They know that every day we get a chance to practice is a day we get better, and a week away – or two weeks away like we’ve seen in many programs – would be a huge loss to our progress that we’re on right now and making.

“These guys do not take it lightly. I’m extremely proud of the respect they have for what’s happening and how we have to go about it. We test three times a week, and I think we’ve made it more convenient, but everything with coronavirus makes things harder than what a normal schedule would be with these guys and how their normal routines would be on a year where we weren’t dealing with this.”

While Fresno State has managed to fend off COVID-19, other teams in the Mountain West have not been so lucky.

New Mexico had its first game of the season against Colorado State cancelled because of a high number of positive cases in Bernalillo County, New Mexico, even though the game was scheduled to be played in Fort Collins, Colorado. New Mexico’s game on Halloween against San Jose State also had to be moved to the Bay Area.

A trip to Utah State is up next for the ‘Dogs, and it comes after Utah Gov. Gary Herbert declared a state of emergency and imposed a mandatory mask order Monday due to an increase in COVID-19 cases.
Although Herbert’s order bans athletics and social gatherings, it specifically exempts collegiate or professional sports, meaning the Bulldogs should be good to go for their trip to Logan.