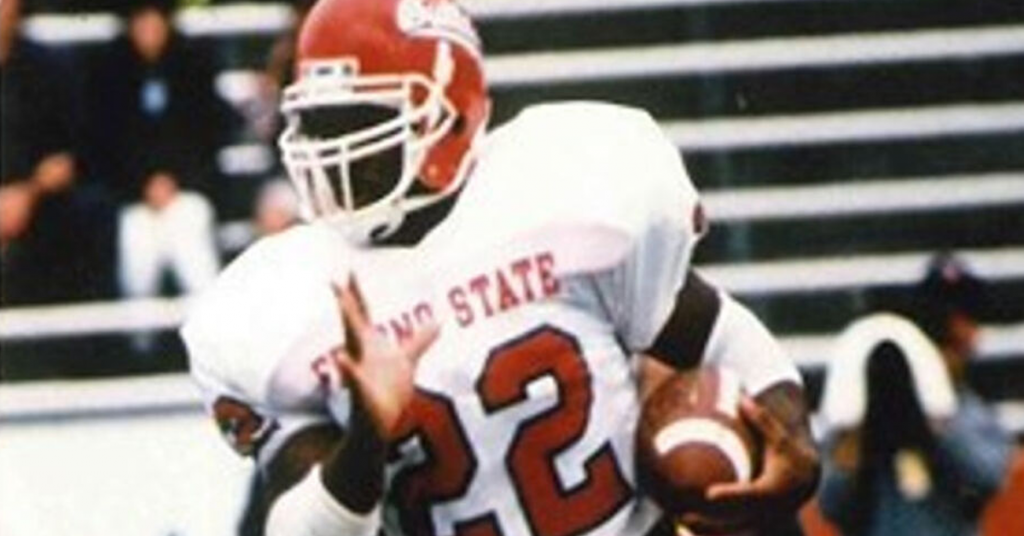 When Lorenzo Neal sees his name and No. 22 unveiled on the press box at Bulldog Stadium on Saturday, he’ll see it as a win for the community, his family and his teammates, not an achievement centered around himself.

Neal, a Lemoore native and a former two-sport star at Fresno State, told reporters Wednesday that his jersey retirement shows the opportunities that are possible for those from small communities throughout the region.

“I think what life’s about, this opportunity, this is not necessarily about me. This is about other individuals that are coming from small communities, whether it’s Corcoran, Huron – it doesn’t matter – Hanford, Lemoore. Greatness is in each and every one of us. Sometimes we let our condition dictate our position, and sometimes we believe that we can’t be successful because we go around and we allow people to dictate and put you in the box that they feel you should be in,” Neal said.

“That’s what I love about this great country. It’s about hard work, determination, perseverance. If you have all these attributes and you work at it hard, you can accomplish anything you want. And those are those things that my dad, my grandparents instilled within me, is, ‘Look son, hard work, it pays off. The will to win means nothing without the will to prepare.’”

After playing running back and winning a state championship as a wrestler at Lemoore High School, Neal enrolled at Fresno State to compete on the gridiron for Jim Sweeney and on the mat for Dennis DeLiddo.

“It was crazy,” Neal said of his two-sport days. “I was young and stupid. Playing both sports, it was honestly one of the toughest, hardest things I’ve ever had to do.”

As challenging as it was to switch from football shape to wrestling shape – which led at time him to act like his shoes were untied to give himself a quick break on the wrestling mat – juggling both sports took heart and shaped his character, preparing him for his NFL future.

Following his collegiate days, Neal joined the New Orleans Saints as a fourth round selection in the 1993 NFL Draft, kicking off a 16-year career in the pros.

Neal was the league’s elite fullback over his career as he played for seven different teams. He was the lead blocker for a 1,000-yard running back for 11 straight seasons, and earned notable prowess blocking for LaDainian Tomlinson with the San Diego Chargers.

His career as a fullback would not have taken off without a conversation during his rookie year with Saints Head Coach Jim Mora.

After getting off to a good start as a running back in his first two games – 175 rushing yards and 1 touchdown – he suffered a broken ankle which knocked him out for the season. When he was healthy ahead of Year 2, Neal knew that he was not the same type of runner as he was pre-injury.

“I remember sitting with Jim Mora, he calls me in his office. I was a little depressed and going through some things and dealing with some adversity,” Neal said. “He said, ‘You’ve just got to buy in. God’s blessed you with a unique body. You’re strong, you can be a great fullback if you commit to this.’

“This is the head coach, he didn’t have to tell me this… Him to tell me that, it resonated with me, and that was the moment that I said, ‘I can’t mope. I can’t put my head down. It is what it is.’ And that’s when I just said, ‘OK, I’m going to be the best fullback I can be, be the best blocker I can be. Any opportunity that I get, seize that moment.’”

Fresno State Athletic Director Terry Tumey called Neal one day to tell him that he will be the next Bulldog to be honored with a jersey retirement.

Neal shared how grateful he is to be enshrined by Fresno State in this manner, especially since he feels there are many others who are deserving of it.

“I’m grateful that this great institution is allowing my jersey, my name to go up in the stadium,” Neal said. “I was just very taken back, surreal and humbled by it.”