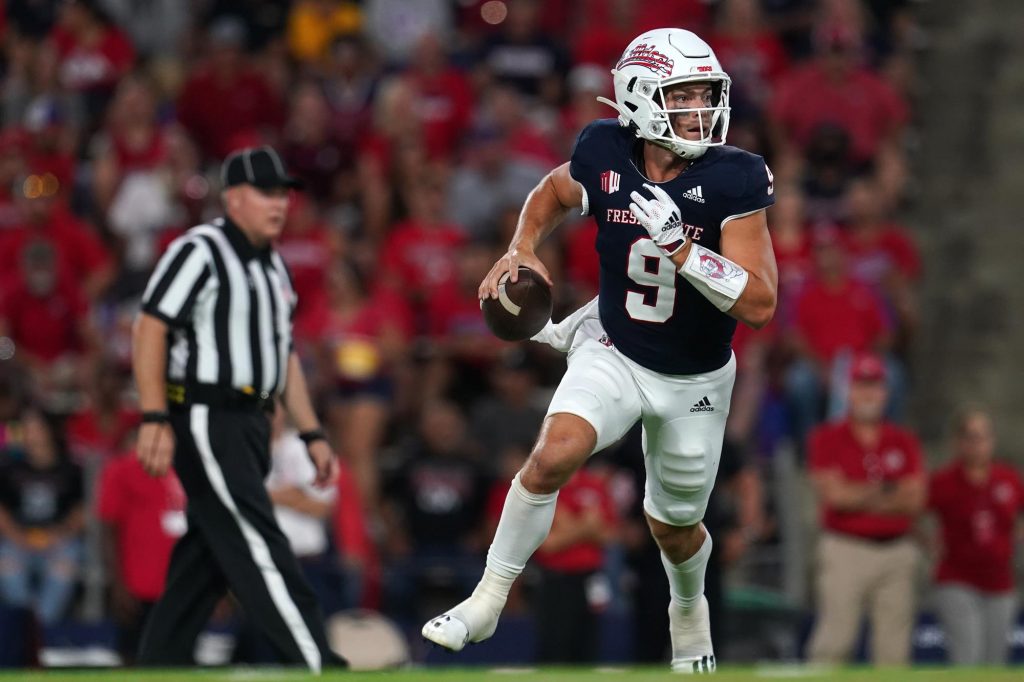 Fresno State took care of business Saturday, bouncing back from the heartbreaking near-upset over Oregon a week before to blow out Cal Poly 63-10.

Any concerns that the Bulldogs would face a hangover from the let down against one of the nation’s best teams last week were quashed by the middle second quarter when quarterback Jake Haener and the offense hit their stride and never let up.

Starting with a two-yard rushing touchdown by Haener on a zone read near the end of the first quarter, the Bulldogs went on to find the end zone on each of their next seven drives.

Obviously the competition level from Oregon to Cal Poly was drastically different, but the Bulldogs did what they were supposed to do in the convincing win.

This wasn’t a repeat of the Sacramento State game in 2019, the last time Fresno State faced a lower-tier Football Championship Subdivision (FCS) opponent. Two years ago the Bulldogs had just come off two very close losses to USC and Minnesota before regrouping to beat Sacramento State 34-20.

While the Bulldogs beat Sacramento State by two touchdowns, the game was tied at 20 midway through the fourth quarter before the ‘Dogs finally pulled away in a game that realistically should not have been competitive.

Fresno State didn’t make the same mistake against the Mustangs, giving hope and confidence that the ‘Dogs will make good on their second chance against the Pac-12 next week at UCLA.

Much of that confidence will come on the back of Haener, who continued his strong start to the season with 380 passing yards and 4 touchdowns through the air.

Wide receiver Josh Kelly only had 3 receptions, but he led the team with 127 receiving yards and found the end zone twice. Receivers Zane Pope and Jalen Cropper followed 95 yards and 70 yards, respectively, as well as 1 touchdown apiece.

The play of the game came on a double pass where Haener hit Cropper on a lateral pass – which looked like a screen. Cropper, who also played quarterback in high school, set his feet and hit Kelly for a 51-yard touchdown.

“That was pretty impressive, actually,” Head Coach Kalen DeBoer said after the game. “He went from one read to the next and back to where he started with some pressure in his face.”

Just as the offense flashed its brilliance, the defense continued to show an improved look over last year as Cal Poly only managed to gain 274 yards of total offense, which included 53 rushing yards on 35 attempts.

“When you can do that with your defensive front, that’s going to set you up for a lot of good things,” DeBoer said. “That’s just going to be something, that physical toughness that we want to have, it’s just going to continue to carry us through the season.”

Does the 2021 squad have the making of a special team?

If there was anything to be critical of in Fresno State’s performance, it would be the fact that the Bulldogs got off to a somewhat slow start once again as they punted on their first two possessions.

Haener acknowledged that the issue has been three games running and can’t continue to occur if the Bulldogs want to beat UCLA next week.

“Going into next week, I want to challenge the guys, and I’m going to talk to every guy on offense – we’ve got to start faster, and we’ve got to put the ball in the end zone on the first or second possession,” Haener said. “Because you start giving the other team the ball a little more, you’re just giving them more chances. I’d like to see us start faster and go from there.”

Haener showed his leadership and didn’t put the blame on any of his teammates, rather saying it’s up to him to improve first and foremost.

“It starts with me,” Haener said. “I’ve got to be better in the beginning of the game. Just getting the ball out of my hand, getting it to the guys that are good with the ball in their hands, and just get the offense rolling. It starts with me and being able to move the unit up and down the field, so I’ve got to do a better job and take ownership of that and do a better job of being in the game.”

That’s the type of leadership and attitude that has DeBoer thinking that this 2021 squad could be going places.

DeBoer was listening in as Haener took the blame for the slow starts. When the head coach took the podium, he praised his quarterback for setting the standard.

“I think that just says a lot about the type of leadership we have on this team, because it’s not just him,” DeBoer said. “There’s other guys as well. Every guy that didn’t play as well as they could’ve, made mistakes, they own up to it. When you have a culture where the ownership is there and it’s player led, that’s when you can have a special team, and I think that’s what we’re on the verge of doing.”

Much of that has to do with having mental toughness, DeBoer said, which was certainly challenged last week as the Bulldogs let a lead slip away to Oregon.

“We don’t have a glazed look in our eyes when things aren’t going right. We just get back to work, and I know that’s what our guys are going to do again this week,” DeBoer said “They’re motivated because we know what we’re capable of doing, what we’re capable of becoming. The word ‘potential’ is a scary word. The words ‘can be’ is scary, but I know that this team’s going to put up the work and we’ll be pretty good because of the character we have.”