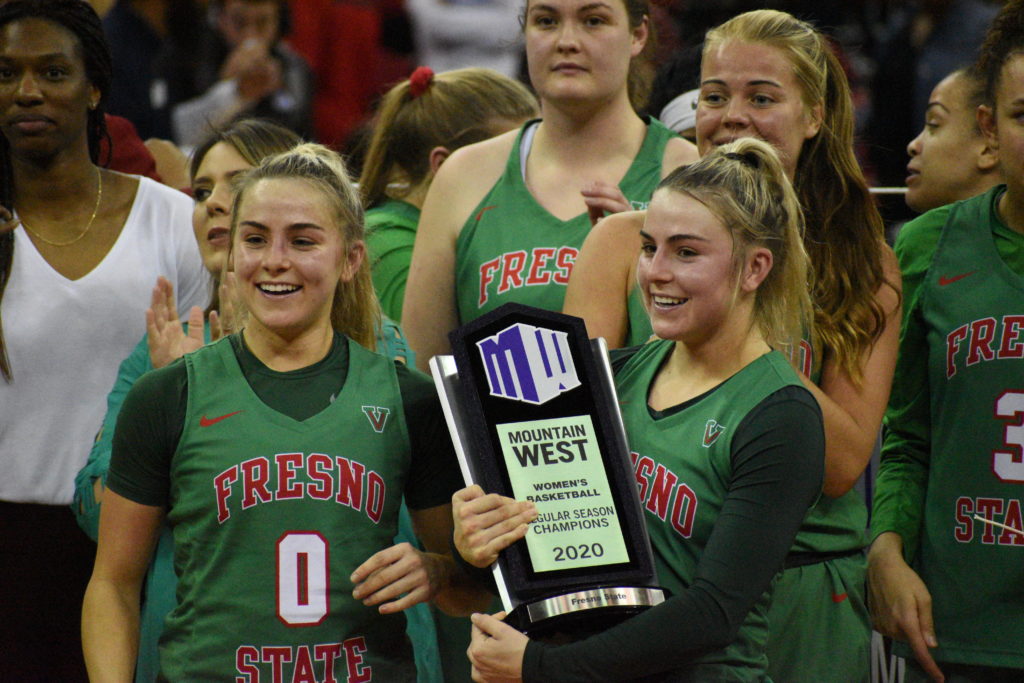 In a battle between the top two teams in the Mountain West Wednesday evening, the Bulldogs proved that they are the premier team in the conference.

The Fresno State women’s basketball team defeated San Jose State 78-76 at the Save Mart Center to clinch the Mountain West regular season title, the Bulldogs’ first title since 2012, their last season in the WAC.

“Our kids were tougher toward the end,” said head coach Jaime White. “We just kept putting points together, finding a way to score. We’re getting a lot of and-ones and drives to the basket, which we knew we could get.”

In as tight of a fourth quarter as the Bulldogs have played all season, they faced a two-point deficit with 1:19 remaining after the Spartans took the lead on a three-pointer.

On the ensuing possession for the Bulldogs, freshman guard Hanna Cavinder tried to hit junior forward Wytalla Motta on a pass near the baseline, but the ball sailed out of bounds.

San Jose State got the ball, and guard Ayzhiana Basallo – the Mountain West’s leading scorer – attempted a layup to try put the game out of reach with 37 seconds left.

Basallo failed to score, continuing her game-long struggles – she only scored 4 points and was 1-8 from the floor.

However, whatever hope the Bulldogs gained from Basallo’s miss disappeared in a split-second as the Spartans grabbed the offensive rebound to reset the shot clock.

Following a timeout with 34 seconds on a clock, White ordered her team to foul San Jose State.

“We only had one foul, so we felt like we had to foul to get close so we could put them on the line if we needed to,” White said. “We didn’t foul on that last one. We said, ‘Don’t foul, just defend,” just to try to mix it up a little bit.”

It worked. The Bulldogs committed three fouls, which forced the Spartans to reset and inbound the ball each time.

After the third foul, Basallo inbounded the ball and tried to lob it into the backcourt, but junior forward Maddi Utti reached up and snagged the ball, coming away with the steal. She passed to Hanna Cavinder, who quickly found Motta near the basket for the game-tying layup.

The Spartans drove down the court with a chance to win the game, but guard Danae Marquez – a graduate of Clovis West High School – came up short, and Fresno State junior guard Aly Gamez grabbed the rebound.

White called a timeout with 3.7 seconds left, which advanced the ball. That gave assistant coach Mandi Carver an opportunity to draw up the game winning play, White said.

Junior forward Bree Delaney inbounded the ball, passing a long lob cross-court and found Utti on the backside of the basket. In one quick motion, Utti jumped, snagged the pass and layed it in to put the Bulldogs up for good.

“Bree Delaney comes off the bench in the biggest play of the night and throws the best perfect pass,” White said. “And Maddi, with her jumping ability, just made it look easy.”

Utti added: “That last play was set up perfectly. Aly set a great back-screen. Bree’s pass just couldn’t be any better than it was, and it went in. I’m just honestly speechless.”

After Utti’s game-winning shot with 2.8 seconds remaining, San Jose State called a timeout and advanced the ball. The Spartans gave the ball to 6-foot-3 forward Tyra Whitehead in the paint, who caused the Bulldogs all sorts of problems the whole game as she put up 28 points and 12 rebounds.

However, Whitehead couldn’t make it to 30. The buzzer rang before she could get off the shot, giving the Bulldogs the conference title.

The Bulldogs dominated the first eight minutes of the game, as they jumped out to a 16-6 lead, but the Spartans quickly closed the gap and took a five-point lead in the second quarter.

With momentum going their way, the Spartans kept feeding Whitehead in the paint, who was too tough of a physical challenge for Fresno State to match.

Fresno State stopped the Spartans in their tracks and went on a 10-4 run to finish out the second quarter, giving the Bulldogs a 34-33 lead heading into halftime.

The Bulldogs came out strong in the third quarter and built up an eight point lead, but the Spartans answered in the fourth to snag it right back, setting up Utti’s stellar play in the final minute.

Utti finished with 16 points and 12 rebounds as she played in all 40 minutes, never going to the bench once. She also led the ‘Dogs with 3 steals.

Freshman guard Haley Cavinder led the Bulldogs with 21 points and also added 10 rebounds. Twin sister Hanna Cavinder was right behind with 20 points of her own.

Gamez was the only other Bulldog in double digits with 12 points.

Fresno State’s transition offense once again proved to be key. The Bulldogs outscored the Spartans on fast break points 12-2.

The Mountain West presented the Bulldogs with the conference championship trophy after the game, and they capped off their magical night by cutting down the net.

Fresno State is the first team in the nation to clinch a conference championship as the ‘Dogs improve to 14-0 in the Mountain West and 21-4 overall.

It’s not over yet for Fresno State, though. The Bulldogs have four games remaining in the regular season before advancing to the Mountain West Tournament in March, starting with a trip to Utah State on Saturday.

“We’ve got to finish out,” White said. “We want to finish out strong and be confident and ready to go into the tournament. I felt like it was important to win this game and to celebrate a championship so that we get used to it. And then when we get into the championship game again, we will feel the same way. We’ll have the same nerves. We’ll know that we can win at that point too.”