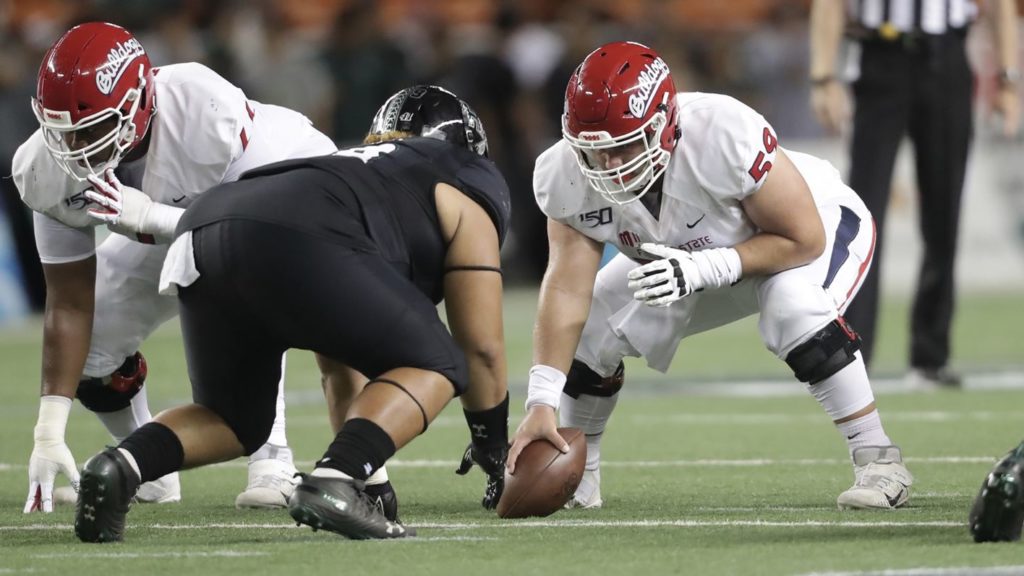 With center Matt Smith lost for the season due to a broken fibula, it’s – once again – a “next man up” situation for the Bulldogs.

Smith is the third starting offensive lineman that will miss games due to an injury and the second who won’t be able to return this season.

“Definitely a next man up mentality with the whole entire unit,” said Tyrone Sampson, Smith’s replacement at center. “Everybody in our room has to have that next man up mentality, because you never know what’s going to happen. Everybody in that room knows that they have a very important role to fill, no matter if you’re a one, a two, a three or a scout team guy.”

The right side of the line has been safe for the ‘Dogs with right guard Quireo Woodley and right tackle Syrus Tuitele. Up until now Smith had the center spot locked down – he started every game along with Woodley and Tuitele.

The left side hasn’t been as fortunate – left guard Netane Muti is out for the year and left tackle Dontae Bull is day-to-day after missing the Hawaii game. Left guard Jace Fuamatu has solidified the position in Muti’s absence, but the offensive line has been a bit of a revolving door. Eight players have started on the o-line this season, and Sampson will be No. 9 this week as the Bulldogs host Utah State.

Fresno State has had a different combination of starters on the offensive line in six of the eight games played. Last season, the Bulldogs had just five different lineups in fourteen games.

Even though all the injuries present the challenge of building consistency with the line, it creates a unique opportunity for a number of young players to get valuable game experience, especially as the ‘Dogs are trying to win the West Division.

“You take the injuries that we’ve had this year on top of the seniors that we lost last year, and we’ve had to dig deep into the reservoir to see who can play,” offensive coordinator Ryan Grubb said. “Obviously you want to just worry about the game that’s in front of you, but it definitely shows promise for the upcoming years.”

Losing Smith, however, isn’t just a loss on the field. He’s a respected leader who was filling in for Muti as team captain.

But it’s not a total loss for the ‘Dogs. Just because Smith can’t take the field, it doesn’t mean he won’t keep having a positive impact on the team.

“Matt Smith will always be around,” quarterback Jorge Reyna said. “We don’t see him leaving or anything. We know his character. His character is always about the team, team first. He’ll always be here for us, and he already expressed that. After the game he expressed his emotions to Tyrone, and told him, ‘Hey, it sucks that I went down, but I’m proud that you stepped up and you did what you did.’”

When Smith went down in the second quarter in Hawaii, Sampson said he felt bad because no one wants their opportunity to come because of an injury to a teammate. But he was ready to step in.

“It’s tough losing Matt, but Matt prepared me for that just in case it did happen,” Sampson said. “He did a phenomenal job of preparing me.”

It took him a minute to get a feel for the situation, but he settled in pretty fast.

“I know my first play I was kind of shaky, but definitely got way more comfortable as the game went on,” Sampson said. “More comfortable with my calls, everything just started going good.”

Fresno State was down 24-14 at halftime, but the Bulldogs came out strong in the second half and scored 27 points in the second half. The ‘Dogs’ were solid on the ground in the first half, to the tune of 116 yards, but a good chunk of those came from wide receiver Jalen Cropper on the fly sweep.

The rushing attack came alive after halftime with the running backs and Reyna’s own ability to gain yards on the ground. The Bulldogs rushed for 174 yards and 2 touchdowns in the second half. Sampson flashed his potential and proved he’s ready for the spotlight.

The young center isn’t a backup who will get bullied by opposing defensive tackles. He was a four-star recruit coming from Detroit with a 6-foot-2, 308 pound frame. ESPN ranked him as the No. 4 center in the nation in the 2018 recruiting class.

While in high school, he formed a relationship with Grubb, who was the offensive line coach at Eastern Michigan from 2014-2016. It was such a strong relationship that Sampson chose to follow Grubb to Fresno State instead of taking an opportunity with one of the Power 5 offers he had, which included Arizona State, Indiana, Kentucky, Louisville, Minnesota, Ole Miss, Nebraska, Syracuse and Virginia.

“He’s starting to be the kid I recruited way back then,” Grubb said. “I think that injuries and some weight issues and things like that have kind of held him back, and the weight issues were stemmed from the injuries. But now he’s starting to become the guy that he can be. He’s going to be a really talented player, and he’s done a good job getting the calls down.”

Sampson’s progression is coming at the right time for the Bulldogs. He said there’s some pressure that comes with replacing a respected player in Smith, but he’s confident he can handle it. Grubb thinks so too.

“He’s getting guys lined up in practice and hustling and moving around, the leadership component of that,” Grubb said. “He’s seen Matt do it, so he knows what it needs to look like. He’s doing a really good job. I’m excited for him, for this opportunity. He’s still got a lot of developing to do, but I think he’s going to be a good one.”