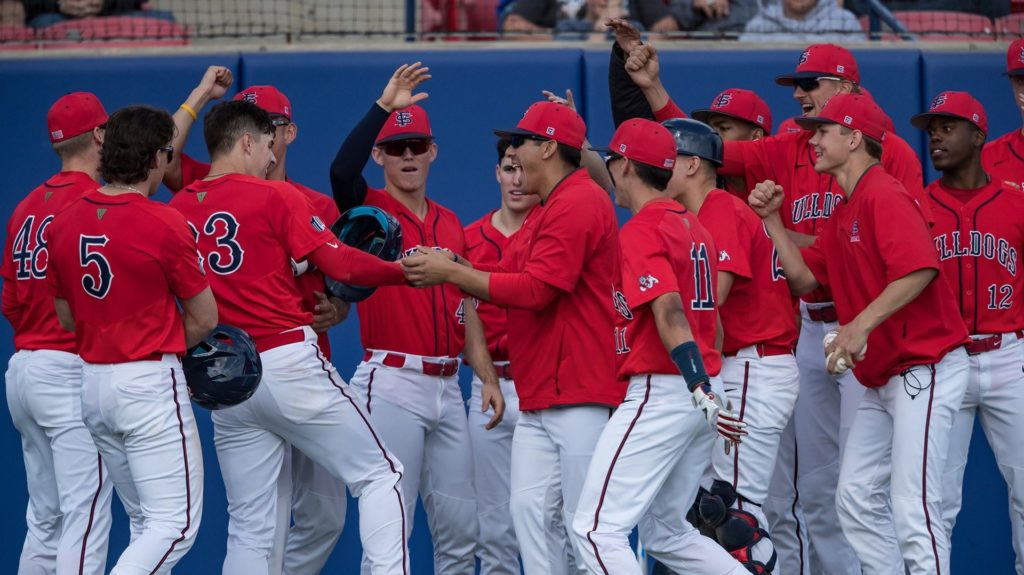 After a tough series over the weekend against Washington, the Fresno State baseball team bounced back in big fashion against Cal Poly, winning 13-0.

It was the most dominant victory in all facets of the game for the Diamond ‘Dogs in 2020, and two freshman stepped up Tuesday evening at Pete Beiden Field at Bob Bennett Stadium.

Freshman pitcher Alex Kendrick took the mound as a starter for the first time in his career and gave the Bulldogs 3.1 scoreless innings while sitting around 92 miles per hour on his fastball.

Kendrick said he was nervous heading into the start, but he quickly settled in and got comfortable as his teammates made plays around him.

“That’s just a great team win,” Kachel said. “Nothing else to it besides just top to bottom clean defense, great pitching and then a great offense – do all three of those things, you’re going to win most of your games. That was just a great win, fun win.”

The Diamond ‘Dogs jumped out to a 4-0 lead in the second inning as all nine batters came up to the plate.

Third baseman Zach Morgan led off the inning with a walk, and Kachel hit a fly ball two-run home run to left field that barely made it over the fence.

Following a strikeout, left fielder Dylan Johnson singled and then advanced two bases on two wild pitches while shortstop Blake Wink was up.

Wink drew a walk, and DH Ryan Higgins singled to through the left side of the infield, scoring Johnson.

The Mustangs held the ‘Dogs to three consecutive scoreless innings until the bottom of the sixth, when right fielder Nate Thimjon blasted a towering home run to left field to knock in three runs and extend Fresno State’s lead to 7-0.

Fresno State tacked on three more runs in the seventh. Morgan scored on a fielder’s choice, and Johnson, Wink and Higgins all doubled to bring the ‘Dogs to 10-0.

The ‘Dogs added three more in the eighth off of Kachel’s second home run of the game, a three-run blast deep to right field.

Head coach Mike Batesole removed Kendrick from the game in the fourth inning after the starter threw 49 pitches. Batesole would go on to use seven pitchers in the game.

“We’re right back on it,” Kachel said. “I have no doubt in my mind that next week we’ll keep it rolling.”