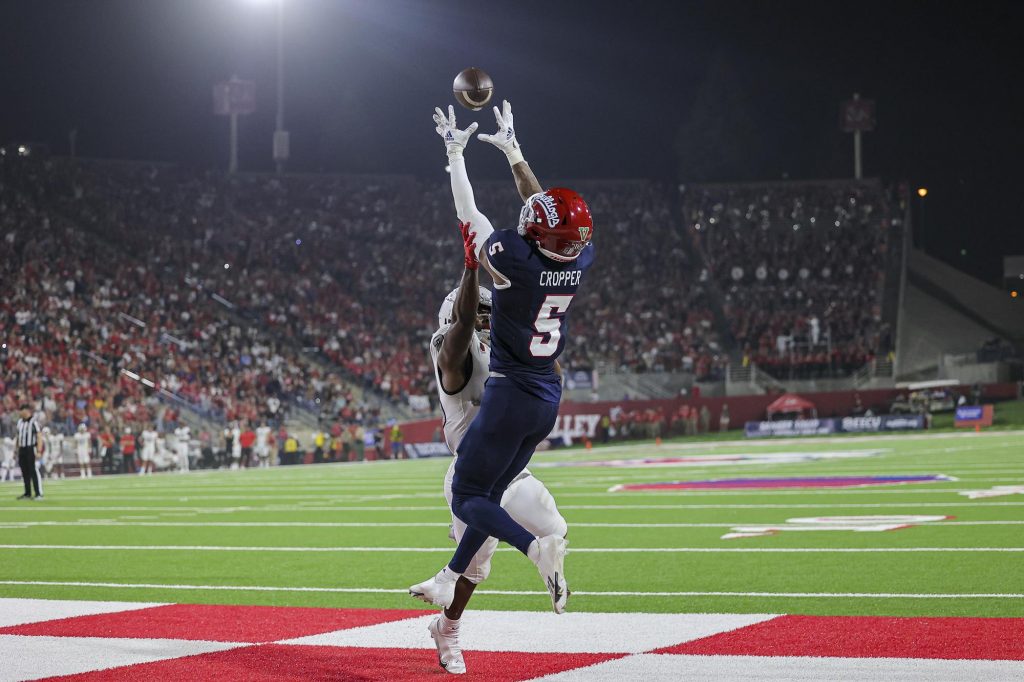 Coming off an emotional win at UCLA, No. 22 Fresno State struggled to find the energy on Friday in the conference opener against UNLV.

While the Bulldogs came away with a 38-30 victory, the game appeared to be one of survival against a Rebels team that, on paper at least, should not have been competitive.

UNLV has not won a game since 2019 – now moving to 0-4 – has had four quarterbacks play significant time this year and has failed to find any consistency or gain any traction. On the other hand, Fresno State spent the last week as a national media darling due to the statement victory in Pasadena.

“Find a way, right? That’s what it’s all about,” Fresno State Head Coach Kalen DeBoer said after the game. “It wasn’t pretty at times, but you’ve got to tip your hat to UNLV as well. There’s no question that they’re a better team than what their record shows.”

It was yet again another slow start for the Bulldogs. Friday’s flatness could be chalked up to hangover from the emotional week before, but slow starts have been an issue in four out of five games for Fresno State.

Whether the slow starts continue or Friday’s showing was an aberration remains to be seen. After the game, wide receiver Jalen Cropper made on thing clear: Fresno State learned a lesson Friday night.

“It definitely motivates us more just to not take any opponent lightly,” Cropper said. “We came off a win off of UCLA last week, and we came here this week knowing that we’re playing an 0-3 team. And it was certainly different. We didn’t overlook them, but they came out with the fire just knowing that we’re a ranked team. We’re going to get the best effort out of everybody we play this season.”

UNLV jumped out to a 14-0 lead in the fourth quarter, and while the Bulldogs battled back to head into halftime down 14-9, the Rebels started the second half with an 80-yard touchdown on the first play from quarterback Doug Brumfield to wide receiver Tyleek Collins and took a 21-9 lead.

But it was mostly Fresno State from there on out. Quarterback Jake Haener caught fire, and his connection with Cropper paid dividends. Cropper snagged a career-high 4 touchdowns – all in the second half – on 10 receptions for 108 yards.

“He’s becoming a complete receiver,” DeBoer said. “He’s not just this fast guy that’s running around that you just get the ball in his hands. He’s winning by running good routes and getting just enough separation, finding a way to pull the ball in traffic.”

Haener struggled to hit his targets early, but he finished with numbers that should keep him at or near the top of the leaderboard nationally: 30-42, 378 passing yards and 5 touchdowns.

With the offense hitting its stride and leading the ‘Dogs to victory, DeBoer focused much of his concern on how the defense was exploited by the Rebels.

UNLV running back and Fresno native Charles Williams gashed the Bulldogs with 102 rushing yards and 1 touchdown on the ground to go along with 96 receiving yards.

His success out of the backfield as a receiver came on screen passes, something that UNLV had not shown much of this season, naturally coming as a surprise to Fresno State.

“I thought in the second half, the run game we did a much better job, and that’s what I felt was really hurting us in the first half,” DeBoer said. “Now, the frustrating thing is the screens, right? And that’s something that they just didn’t show a lot of on film. They got us into the boundary in the short side there with that quick little screen that we’ll definitely take a look at. We’ve got to get that fixed, because people are going to look at that play.”

“Charles, I give props to him. He was running hard,” defensive end Arron Mosby said. “Our defense turned it on at the end at the perfect time that we needed it, but we’ve got to get back to the drawing board. We’ve got to get better because we’re not supposed to have 100 yards rushing on our defense.”

As Mosby referenced, Fresno State’s defense stepped up and made much-needed plays late in the fourth quarter to hang on for the win.

After Cropper caught his fourth touchdown of the night with just under five minutes to go, UNLV had an opportunity to drive down the field and take the lead.

But Mosby had other ideas. He quickly got to the quarterback on the second play of the drive for a strip sack, giving the ‘Dogs possession deep in UNLV territory. Fresno State went on to kick a field goal and go up by eight.

Mosby said the game was a “humbling moment” for the team, given the UCLA win and the ensuing national attention.

While the Bulldogs came out flat and did not look like the team that beat UCLA the week before, they survived.

“There’s no question the guys in that locker room care so much, and sometimes they maybe care too much. They’ve just got to go out there and have fun and play ball,” DeBoer said.