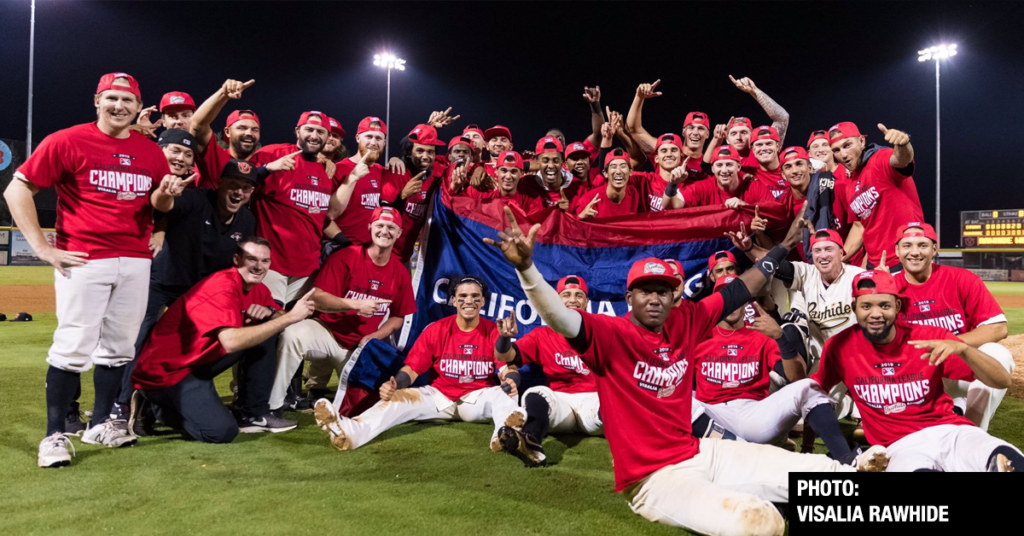 The Visalia Rawhide celebrated the first California League championship since the 1978, defeating the Lake Elsinore Storm 4-3 on Saturday.

Yet, since last October, the team has been up for sale. Now, they appear close to having a new owner.

Back in July, Rawhide President Tom Seidler told The Sun he expected a sale would take place after the 2019 season.

Seidler and cousin Kevin O’Malley run Top of the Third, Inc., the organization that owns the Rawhide.

Top of the Third bought the Rawhide in 2002 and is in its 18th season in charge, the longest-running ownership in team history.

“We feel good about where the ball club and the ballpark are, and I think the next group can probably be a little more active and take it to the next level,” Seidler told The Sun in July.

Seidler and O’Malley are part of a deep lineage of baseball royalty. Their grandfather was Walter O’Malley, the legendary owner of the Dodgers.

Under the elder O’Malley’s watch, the Dodgers relocated from their ancestral home at Ebbets Field in Brooklyn to Chavez Ravine in Los Angeles.

Now, two generations later, the family remains in the baseball business. Aside from the Rawhide, in 2012, Seidler’s brother – Peter Seidler – led the investor group that purchased the San Diego Padres.

Tom Seidler also serves as the Senior Vice President of Community and Military Affairs for the Padres.

Seidler added that he felt that it was time to sell the Rawhide so he can focus on his family and his obligations with the Padres.

Last week, during a Visalia City Council meeting, Seidler announced Top of the Third was nearing a sale with a new company, known as First Pitch Entertainment.

The Sun-Gazette reported that First Pitch is run by a father-son duo, Elliot and Sam Sigal. Father Elliot is a retired research and development chief for Bristol-Myers Squibb who currently resides in Monterey.

“Visalia is impressive with its support for baseball,” Elliott Sigal told the Sun-Gazette. “We see a lot of neighborhoods with a lot of pride in ownership.”

Sam, however, was a minor league baseball broadcaster in the northeast and Mid-Atlantic. He indicated that he would be relocating to the community where the family acquired the team.

The City of Visalia also approved a 10-year lease with a $300,000 subsidy for utilities and maintenance contingent on the closing of the sale between the Seidler-O’Malleys and the Sigals.

The Rawhide have been the Arizona Diamondbacks’ Class A-Advanced affiliates in the California League since 2007.