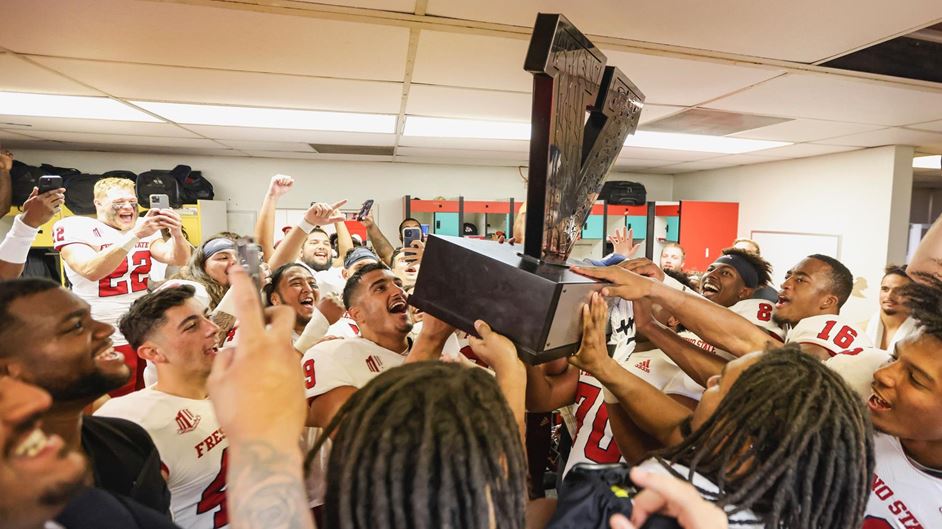 Despite a dominant win against San Jose State on Thursday, Fresno State’s hopes of winning the Mountain West Championship have been decidedly dashed.

That’s because San Diego State clinched the top spot in the West Division Friday with a with over Boise State, ending the Bulldogs’ season earlier than they would have liked.

Even though Fresno State won’t advance any further within the conference, the Bulldogs ended the season on a high note with a 40-9 win over the rival Spartans and securing the Valley Trophy once again.

The Thanksgiving day matchup proved to be an easy one for the Bulldogs. Fresno State jumped out to a 23-9 lead at halftime on the back of a strong start by quarterback Jake Haener, who had 2 touchdown passes in the first half.

Fresno State held San Jose State to just three field goals in the first half and would go on to keep the Spartans off the board the rest of the game.

The Bulldogs also recorded their first safety of the season, coming on an intentional grounding penalty in the second quarter.

Haener finished with 343 passing yards – his eighth 300-yard game of the season – and 4 touchdowns to go along with no interceptions.

Running back Ronnie Rivers led the team with 65 yards on the ground and also recorded a team-high 91 receiving yards and 1 touchdown reception.

Jalen Cropper was the top receiver for the ‘Dogs with 7 receptions for 76 yards and 1 touchdown.

After the game, head coach Kalen DeBoer praised his defense, which was especially stout against the run, holding the Spartans to 64 yards on the ground and forcing 2 fumbles.

“San Jose State is a good football team, and we came out and played a complete football game. The defense did some really good things and got stops in the red zone to hold them to field goals. We were able to score on the first drive, which is something we’ve been talking about all year long,” DeBoer said.

“We kept playing our game through the second quarter, which put us in a good spot going into the third quarter, and we were able to put points on the board during the first couple drives and put the game away. We did what we needed to going into the fourth quarter to get out of here with the win. The team was great with the preparation this week. This team is all about character, and they showed that. They don’t take anything for granted, and they enjoy the opportunities that they get to play together.”

With the win, Fresno State wraps up the regular season with a 9-3 record with a to-be-determined bowl game to come.