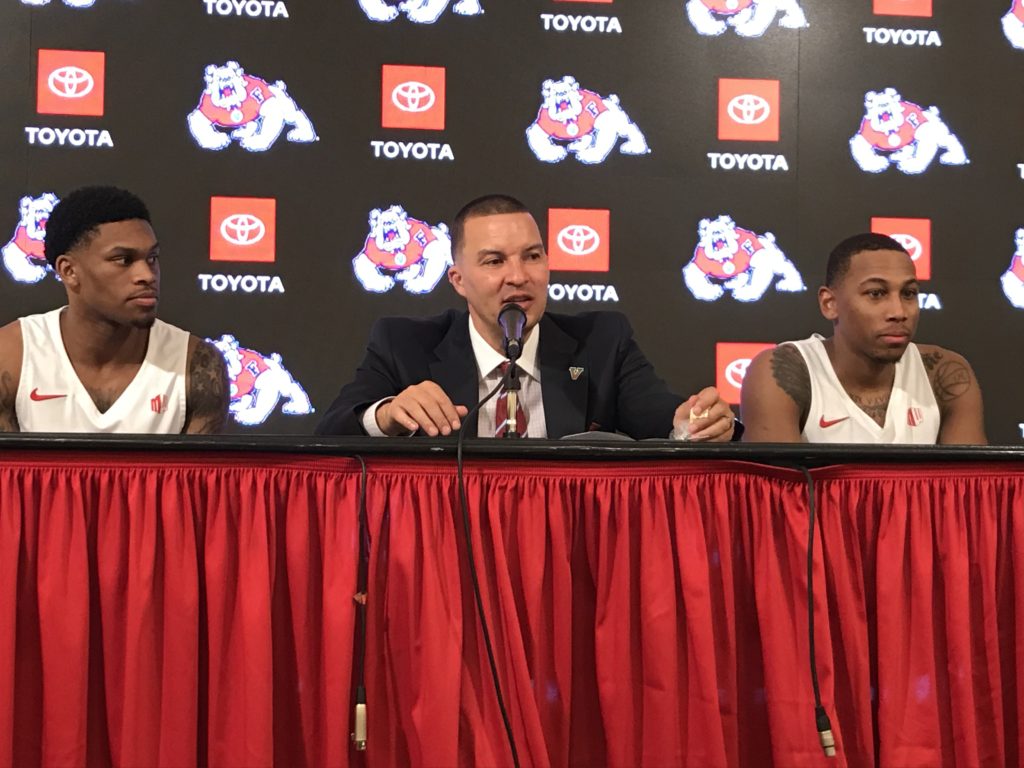 In a season with so many close, tightly contested games, the Bulldogs didn’t have to face another nail-biter. Instead, they went up early and coasted the rest of the way, beating IUPUI 95-64 on Friday.

“I think they recognized this was not the greatest team, but they posed some challenges,” head coach Justin Hutson said. “They really did. They have some guys that can really score, and I think it was our defense that set the tone that allowed us to get to that big lead and coast.”

Fresno State started its final stretch of nonconference games – all three at the Save Mart Center – with its highest-scoring output of the season so far.

The Jaguars kept it close for the first six minutes, but the Bulldogs took a 13-12 lead with 13:30 left in the first half and just kept piling it on behind an energized defense and a strong effort on the glass. The ‘Dogs went on a 39-13 run to end the half and went into the locker room up 52-25.

It was more of the same in the second half as the ‘Dogs continued their dominance en route to the 31-point victory.

Forwards Nate Grimes and Orlando Robinson had their way in the paint. They combined for 23 points and 16 rebounds, and the Bulldogs finished with 30 points in the paint.

Senior guard New Williams led the Bulldogs with 24 points, nearly matching his career high of 26 that he set a couple weeks ago at Utah State.

“New’s a good shooter,” Hutson said. “Those injuries kind of put him back a little bit. It’s hard to find a rhythm. I think he’s starting to find a rhythm, so we’re going to expect more consistency from him.”

Williams attributed his recent success to simply being comfortable on the court.

IUPUI suffered a run of bad luck – two starters went down with injuries. Guard Marcus Burk went down in the first half and forward Isaiah Williams left in the second half. When Williams suffered the injury, he was IUPUI’s leading scorer.

Fresno State had great ball movement all night, and the ‘Dogs capitalized from the charity strike, making 16-17 free throws. Robinson was a perfect 7-7.

The Bulldogs dominated in all facets of the game.  They only had 10 turnovers compared to IUPUI’s 19, they outrebounded the Jaguars 46-27 and they led in assists 21-8.

“That was something we talked about, was turnovers and rebounding,” Hutson. “We talk about it every game, but this was a very good rebounding team, so that was a huge emphasis for us. And turnovers for us, a lot of times they’re self-enforced, so we want to talk about making an easy play. And I thought we did that for the most part.”

Fresno State improves to 4-7 but faces much tougher competition on Monday against San Francisco University (9-3).