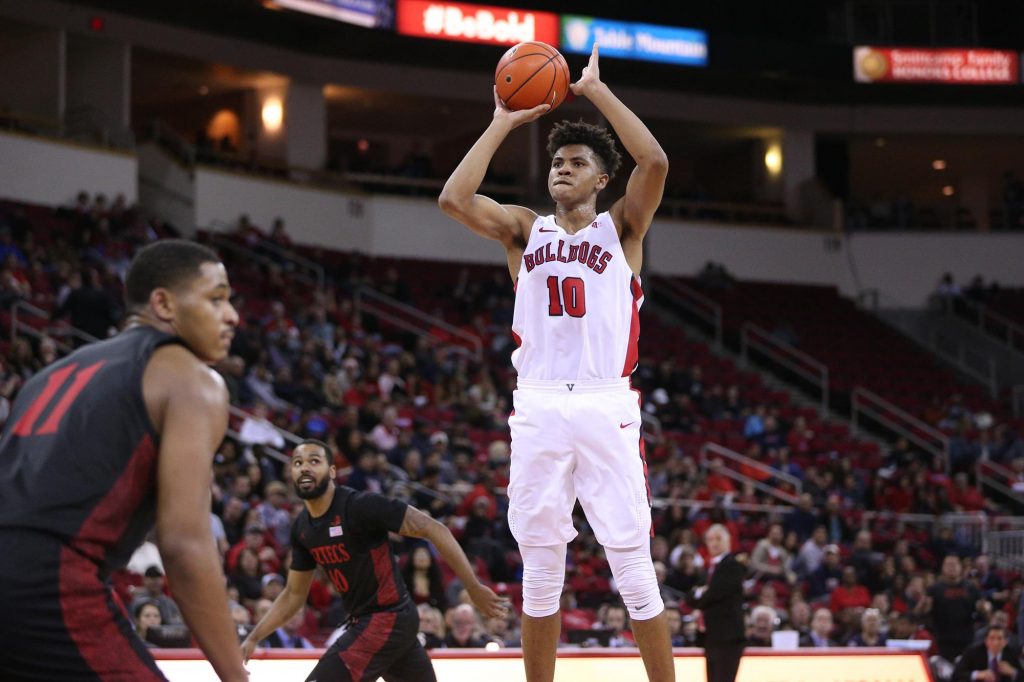 Given the lack of returning experience and the little practice time due to COVID-19, Fresno State men’s basketball is facing a season full of unknowns and limited expectations.

Fresno State has been picked to finish eighth in the Mountain West preseason poll, a prediction that head coach Justin Hutson attributes to the fact that the Bulldogs have eight new players coming in and only one returning starter: sophomore forward Orlando Robinson.

The biggest losses come in the backcourt. Noah Blackwell and New Williams graduated; Jarred Hyder, Aguir Agau and Mustafa Lawrence transferred and Niven Hart departed after one season to take his chances in the NBA Draft.

“We did lose a lot of guards, and I think when you start looking at preseason rankings and different things that way, I think you’re going to go on what level of production do you have coming back,” Hutson said at the Mountain West virtual Media Days Wednesday.

Robinson had as good of a freshman season since Paul George’s days in the Save Mart Center, and he is one of Fresno State’s few known commodities. He was the Bulldogs’ best all around player, leading the team with 12.2 points per game, and he was second in rebounding and blocks.

He is also now listed as a seven-footer, growing two inches since the start of last season.

The only other returning players who saw time on the court last year are guard/forward Anthony Holland, who played in 29 games while starting 7, 7-foot-2 center Assane Diouf, who played in 19 games but only averaged 6.8 minutes per contest and guard Jordan Campbell, who was not eligible until last January after transferring from Oregon State and only played in eight games.

The newcomers in the backcourt are DePaul grad-transfer Devin Gage, junior college transfer Kyle Harding, Tulsa transfer Isaiah Hill and UTEP transfer Deon Stroud, who is waiting for the NCAA to approve his transfer eligibility request.

It’s hard to tell who will take the court around Robinson, and Hutson has not had much time to even figure it out for himself.

The ‘Dogs returned to practice last Sunday after sitting in quarantine for 14 days due to two positive COVID-19 cases on the team. Hutson also revealed that that was the second time the team had to quarantine due to positive coronavirus cases, meaning the Bulldogs lost 28 days of practice time.

Fresno State also lost all of the regular summer and fall team activities due to the pandemic.

“I think the reality of it is we’ve had more COVID tests since March then we’ve been together in the gym,” Hutson said. I think this is maybe our 15th time being in the gym since March. I know I’ve had that little stick put up my nose way more times than 15 in being around my team since March.”

This season has the makings of one that could go several different ways. Robinson could very well take his game to the next level and establish himself as the best player in the conference. Campbell will finally have the opportunity to be a consistent scoring threat, and Holland should continue to grow and contribute.

Gage should have the opportunity to step in immediately considering his experience at DePaul: 82 games played, half of those as a starting guard. Meah might flash his potential early and match what Robinson did last year.

Or the lack of practice time leaves the ‘Dogs without any cohesiveness and chemistry early in the season, and they find themselves at the bottom of the Mountain West.

Regardless of the lack of practice time, Hutson is not demanding or expecting any less because of the pandemic-fueled disruptions.

“I love the group that we have,” Hutson said. “I love the effort that they’re bringing to the equation, so I think we all have to be mature in how we’re handling this situation.”

Fresno State opens the season at home on Nov. 25 against William Jessup University.