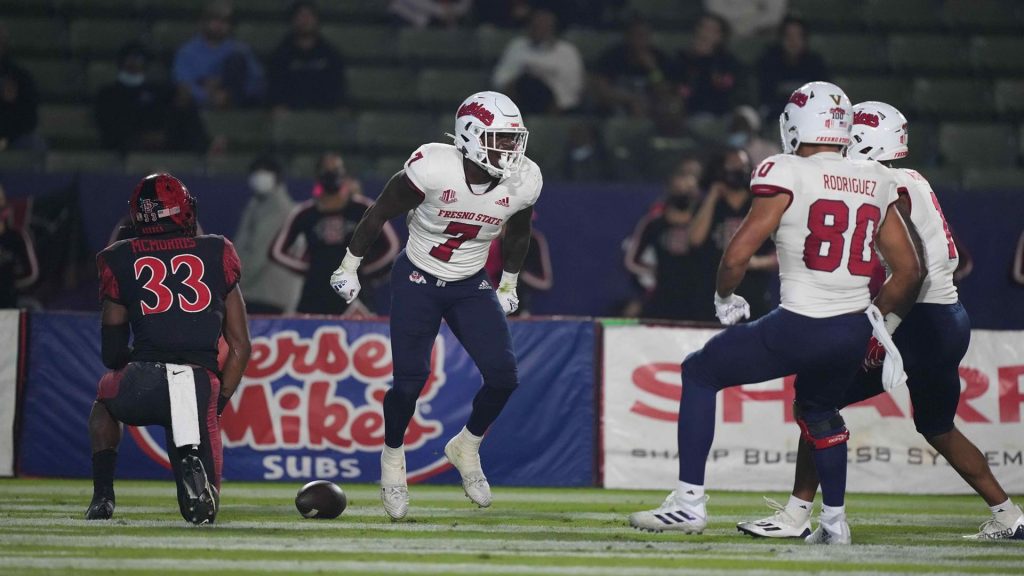 Fresno State jumped out to an early lead over No. 21 San Diego State and powered through for the 30-20 win, handing the Aztecs their first loss of the season as the Bulldogs moved into the driver’s seat in the conference.

The Bulldogs relied heavily on the legs of running back Jordan Mims and another stout defensive performance to take back the Old Oil Can trophy from the rival Aztecs.

As Head Coach Kalen DeBoer predicted earlier in the week, taking an early lead pushed the Aztecs out of their gameplan, forcing the run-heavy team into more passing situations.

“We really took away their strengths with running the football,” DeBoer said after the game. “Just us being able to establish the run consistently early on and consistently do it was huge.”

After trading scoreless possessions to open the game, the Bulldogs struck first on a 13-yard touchdown rush by Mims to cap off a 15-play, 86-yard drive.

The ‘Dogs continued to add on, eventually extending their lead to 20-0 before San Diego State found the end zone for the first time with just a couple minutes left in the first half.

San Diego State’s rushing attack had been its strength on offense all season, but the Aztecs only ran the ball 11 times for 38 yards in the first half as they tried to catch up to the ‘Dogs.

“I thought we matched up well, especially not just their personnel and their philosophy, but also with their scheme,” DeBoer said. “So a lot of confidence going in, and I think we just keep getting better up front, and just that showed setting the tone early. We’ve done just such a good job of coming out in the first quarter and being ready to go and not feeling our way into it – getting the stops right away, getting the ball back to our offense.”

While the Bulldogs struggled to find the end zone on every offensive possession in Aztec territory, kicker Cesar Silva made sure they didn’t go empty handed, making 3 of 4 field goal attempts, including one from 49 yards.

Defensively, the Bulldogs finally started giving up some ground to the Aztecs after. San Diego State played more to its normal self, gaining 83 yards on the ground in the third quarter halftime.

But Fresno State held the Aztecs to 1 touchdown in the third and made it to just 1:06 left on the clock before allowing San Diego State to find the end zone again.

In for the injured Ronnie Rivers, Mims had a career-high 186 rushing yards and 2 touchdowns to go along with an average of 6.4 yards per carry.

“We’ve got a back that can be the feature back with Jordan Mims,” DeBoer said. “Probably tonight was his style of football where we needed to ground and pound. I’m just so proud of him, because all the things he’s worked on. We’ve challenged him with getting better at being more physical, being tough. He’s just made himself better in these areas.”

Quarterback Jake Haener was not the world-beater that he was early in the season, but he worked with Mims to provide Fresno State’s most balanced attack of the season. Haener finished 25-42 for 306 yards and 1 touchdown.

Fresno State lost star wide receiver Jalen Cropper in the third quarter to a knee injury that required him to be carted off the field. Cropper returned to the field later in the game and was jogging around the sideline, but he did not see any more playing time. DeBoer did not have an immediate update to Cropper’s injury following the game, but he was hopeful that the injury is not season ending.

With the win, the Bulldogs move into first place in the West Division in the conference, improving to 7-2 on the season.