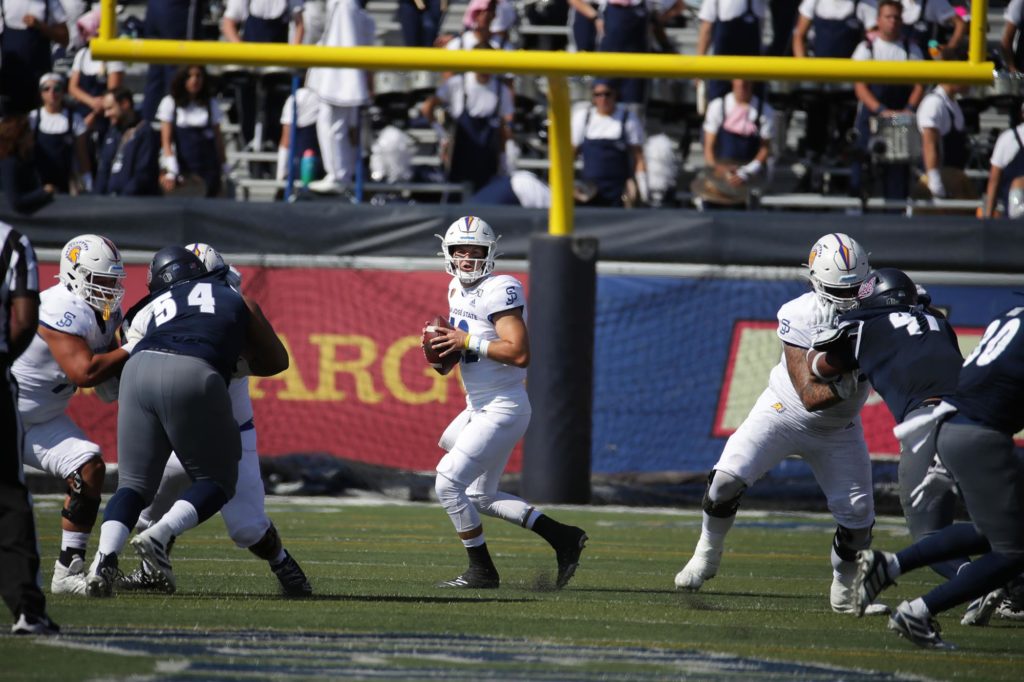 San Jose State – Fresno State’s oldest rival – is having a very similar season to the Bulldogs. The Spartans are 4-7 and are coming off three straight losses.

For all the tough losses the Spartans have endured this year, they had one of the most shocking upsets in the nation early in the season when they went on the road to SEC country and defeated Arkansas 31-24.

Head coach Brent Brennan is in his third year in charge of the Spartans, and there hasn’t been much to write home about. In his first two seasons he led teams that finished 2-11 and 1-11.

There is a Fresno State connection on the coaching staff. Offensive line coach Joe Bernardi played for the Bulldogs from 2006-2010, and he coached tight ends at Fresno State in 2016.

Even though San Jose State will finish with another losing record, the team is miles better than they were the last few years, and a good part of that can be attributed to quarterback Josh Love.

Love, a senior, played in 21 games the previous three years, but he rated as one of the best in the Mountain West. That’s changed drastically this season as he’s taken a huge step forward.

Under Love, San Jose State has the conference’s best passing attack. Love leads the Mountain West with 3633 passing yards, and he’s averaging 330 yards per game, which is third in the nation. He’s second in the conference with 22 touchdowns.

Since Love has shown he’s more than capable of leading the Spartans, San Jose State has gone all in on the passing game this season. Love attempts 40 passes a game, placing him at No. 2 in the country.

Love has three top targets at receiver, led by Tre Walker. The Jr. Wideout is one of only two receivers in the conference to have over 1,000 receiving yards, and he’s averaging 114 per game. For all his prowess as a No. 1 receiver, he’s only caught 2 touchdowns this season.

Walker torched Fresno State last season for 116 yards and a touchdown. Considering the Bulldogs’ defensive struggles this season, containing Love and Walker will be the top priority on Saturday.

For as good as the Spartans’ passing game is, their rushing attack ranks last in the Mountain West. They’re the only team in the conference to have not gained 1,000 yards on the ground this season, and they’re only rushing for a paltry 3.5 yards per carry.

However, running back DeJon Packer has racked up 10 rushing touchdowns, which really is the lone bright spot for the Spartans on the ground.

Defensively, San Jose State boasts an excellent secondary which ranks third in the conference in defending the pass.

The unit leads the conference with 15 interceptions. Senior defensive back Brandon Ezell leads the way with 4.

The Spartans defense mirrors the offense. Both units are strong in the pass game, but neither side can do anything with the rushing attack. San Jose State ranks last in the conference giving up 236 rushing yards per game, 30 more than the next worst team.

San Jose State has recovered 7 fumbles, so the Spartans’ total of 22 turnovers gained is tied for first with Fresno State.

The real weakness of the defense lies in stopping opponents third down. The Spartans are allowing opponents to convert on third downs exactly half of the time, which ranks last in the conference.

Even though they’re going on the road, the Bulldogs are 2.5-point favorites. The over-under is set at 65.5, which falls right in line for a high-scoring game.