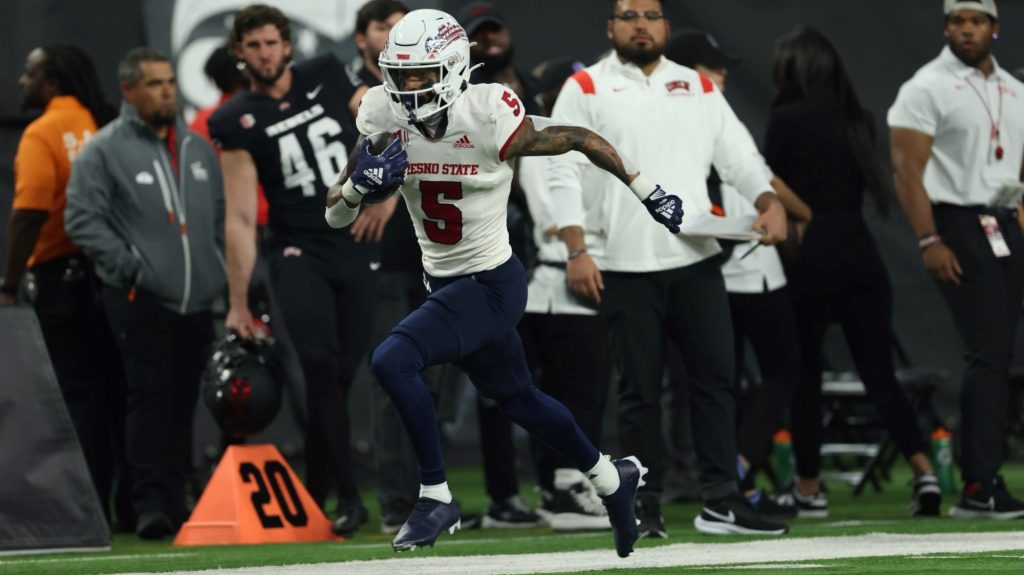 The Jake Haener to Jalen Moreno-Cropper connection was back in full force in Friday’s 37-30 win for the Bulldogs on the road at UNLV.

It didn’t take long for the quarterback-wide receiver duo to connect. On Fresno State’s first drive of the game, Haener hit Moreno-Cropper for a 33-yard touchdown.

That was just the start for Moreno-Cropper, who tacked on another touchdown catch and finished with 8 receptions for 164 yards to go along with the 2 touchdowns.

After the game, Moreno-Cropper credited offensive coordinator Kirby Moore for putting together the gameplan which led to his dominant performance over the Rebels.

“We knew they were going to come out with fire. Their DBs are some of the best we’ve seen since Oregon State. When your number is called, you just have to make the plays. I dropped the first pass, but I told Jake that I had him the rest of the game,” Moreno-Cropper said.

“Jake and I have a great friendship. It’s great to have him back. Everything is clicking for us on offense right now. The win feels good, and it feels good to be sitting at the top of the West Division.”

Fresno State’s strong offensive showing pushed through what was a close game all night.

UNLV jumped out to a 10-7 lead by the end of the first quarter and went to the locker room at halftime up 16-14.

The Bulldogs would go on to outscore the Rebels 23-14 in the second half to improve to 6-4 overall and 5-1 in conference, good for first in the West Division, as Moreno-Cropper noted.