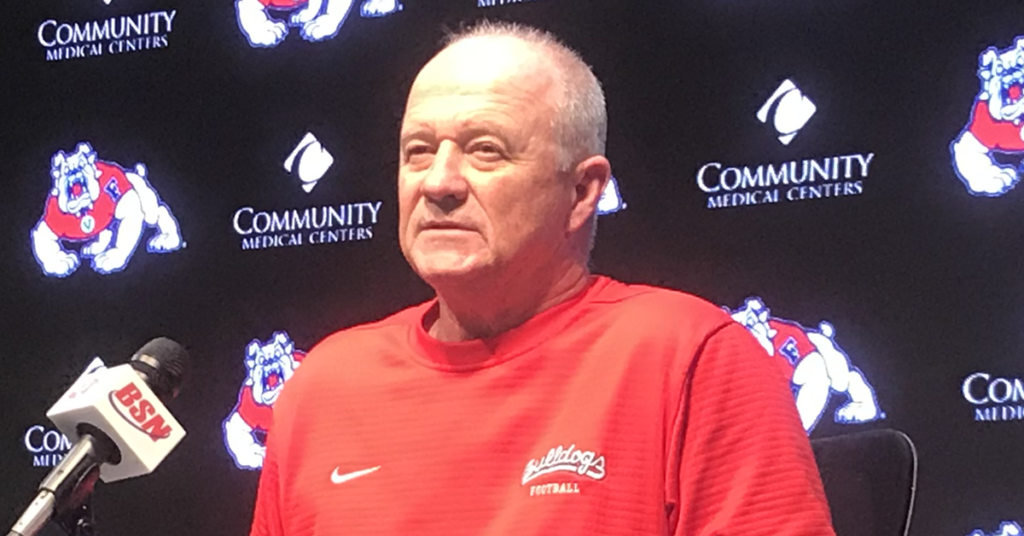 In spite of Saturday’s opportunity-filled loss against Colorado State, Jeff Tedford and his Bulldogs still hold their destiny in their hands.

With a 1-2 record in Mountain West action, Fresno State sits in third place in the conference’s West Division, trailing San Diego State (4-1) and Hawaii (2-2). Since the ‘Dogs have only one more conference loss than San Diego State, the division title is still very much in reach.

Four of Fresno State’s final five opponents are within the division, so if Fresno State can reset and fix the mistakes that have plagued the Bulldogs – missed tackles, poor offensive timing and giving up big plays, to name a few – they’ll have a chance at punching a ticket to the conference championship game.

Is this team capable of running the table and winning the division? That’s a question for another day.

Head coach Jeff Tedford isn’t concerned with the division prospects that lie in the future. He’s focused on taking it game-by-game, day-by-day.

One area that needs improvement is execution in critical situational plays with quarterback Jorge Reyna. After the early season interceptions near the end of games, Reyna started to find a groove and was improving.

Against Colorado State, however, a critical mistake on third down late in the fourth quarter hurt the Bulldogs. On the ensuing drive after the Rams went up 38-31, the ‘Dogs faced a 3rd and 3 situation on their own 39-yard line.

The offensive line gave Reyna a good amount of time, but he was unable to quickly find a target. He rolled out to his right and had plenty of space to run for the first down, but he took a shot downfield to wide receiver Derrion Grim and missed out of bounds. The ‘Dogs failed to convert on the next play, essentially eliminating all hope for a comeback.

After reviewing the film, Tedford said: “During the game I thought for sure he should have run the ball, but as you look at the play on tape, Grim had gotten behind guys by 10 yards. So if it’s an accurate throw, it could be a touchdown. You’re kind of caught between we can do something here, make a huge play. It just happened to be a ball that was thrown out of bounds, but Grim was clearly like 10 yards behind everybody.

“The guys had come up because Jorge was scrambling. I think at first view it’s like, ‘You’ve got a lot of room right there. Go get it.’ But he sees the receiver 10 yards behind the secondary, and he’s trying to make a big play. I don’t know that you can doubt him for it. It was just an inaccurate throw that went out of bounds. But yeah, knowing situations, there’s always something you need to go over with the quarterback. He was being aggressive, and he had a guy open that broke free and had the potential to be a really huge play. It just wasn’t a really good throw.”

Another issue last Saturday was with kick returns. The ‘Dogs haven’t had much success with their returns all season, and the issues continued. They had seven kick returns and averaged only 17.7 yards a return.

Something the Bulldogs don’t do is call a fair catch and take the touchback to the 25-yard line. That won’t change anytime soon.

“I think we need to block better,” Tedford said. “If you fair catch every ball you never have a chance to break one. So I’d like to think that at some point we’re able to break something, or at least give [ourselves] an opportunity to do it, so that’s why we don’t fair catch it. We didn’t perform very well on that team, and we have to improve there.”

For the first time this season, freshman wide receiver Jalen Cropper got a couple opportunities to return kicks, and he had a team-high return of 24 yards. With his speed and success with the fly sweep, he might have a bright future on special teams.

“Jalen played a good game,” Tedford said. “Shifty, as we know he is. He had some more plays, had some special teams plays. He’s doing a good job. He’s getting better every single week like all our freshmen are.”

Here’s more of what Tedford had to say on Monday:

On defensive back Bryson Oglesby:

“He did a good job playing more of a nickel type guy, sam backer in certain situations. That’s a role that, especially when you’re playing a team that’s going to throw the ball – [he’s] used to playing safety, so making the switch there with our depth and how we’ve had some guys banged up you have to move people around sometimes. He did a fine job.”

On if leaving Thursday for Hawaii will change anything with the practice schedule:

“It won’t. It won’t change at all. We’ll do the same thing Thursday. We’re a morning team, so it really doesn’t affect us as far as that goes. We’ll practice Thursday morning and then leave Thursday afternoon and get there sometime around 4, 5 o’clock, something like that. It’s more about coming home. I don’t think we get home until 7 o’clock in the morning. So it’s really on the opposite end that – daylight savings too – so we get home a seven in the morning. But as far as the practice week is concerned, it really won’t affect us. We’ll leave after practice on Thursday.”

On his previous experience traveling to Hawaii:

“We’ve done it before. We’ll stay on schedule. We’re going a day early just to get acclimated. It’s a long flight. The next day we’ll get up and we’ll make sure that we’re moving around and get a short practice in on Friday morning as well. Anytime you travel you’ve got to expect the unexpected as far as traffic’s concerned or something going wrong at the hotel, or whatever. It seems like there’s something that happens. But we’ll do our best to keep our focus and keep our mind on the game, but we’ll get there in time to be able to have dinner, watch the practice tape and do those type of things and get a good night’s rest – and get up and have a regular Friday like we would normally have one at home or if we were travelling somewhere more local.”

On running back Ronnie Rivers’ performance against Colorado State:

“It was great. He played a great game. He made a lot of things on his own. He made some guys miss. I thought [he] really ran hard, ran with good vision, not only running the football, but he caught I think three passes. He played a really good game. He’s been playing well. He’s had some big runs that he broke out the back door because nobody was home because all the man coverage. He was able to make some big runs. He’s a good player. Obviously it’s nice to have him perform at a high level and keep the sticks moving and make big plays.”