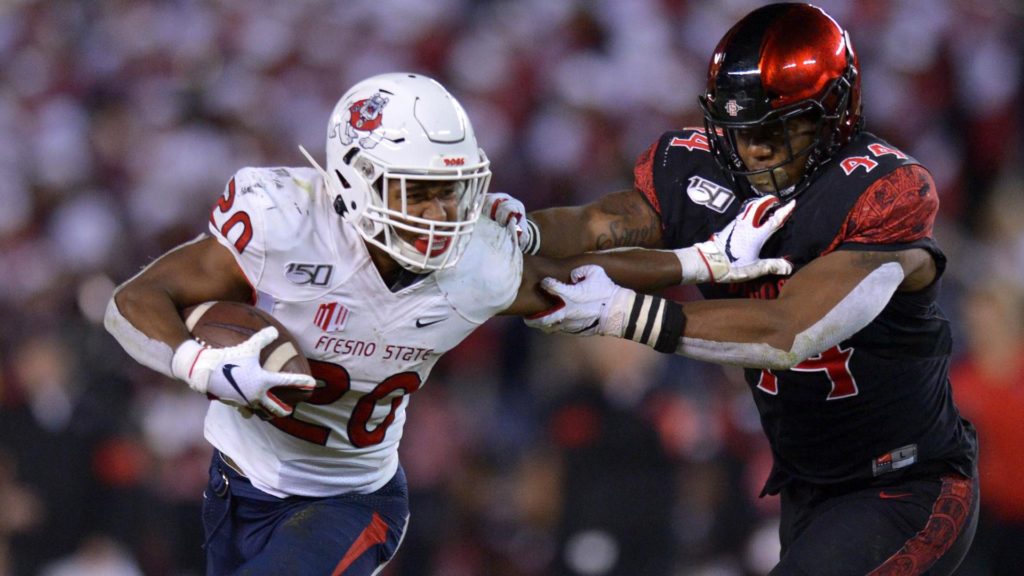 It’s been a season to forget for Fresno State. Although the Bulldogs (4-7, 2-5 MW) can’t make a bowl game, they have an opportunity against rival San Jose State to build some momentum for next year.

“Playing for pride, playing for the Valley Trophy,” head coach Jeff Tedford said. “It’s a rivalry game. It’s our last time together as the 2019 team. Like we always do, go out and compete our hardest and try to end the season with a victory and a good note.”

San Jose State is Fresno State’s oldest rival. The schools first met in 1921, and they will play for the 83rd time on Saturday. Fresno State leads the all-time series 42-37-3.

“It is a traditional rivalry, and the trophy means a lot,” Tedford said. “This in essence really is our bowl game, and we need to have a great week and come out motivated to retain the trophy.”

After Fresno State won the Mountain West last season and San Jose State finished 1-11, it’s safe to say that no one expected the teams to have a similar 2019 season. But that’s exactly what happened this year.

The Spartans are also 4-7, and most of their losses have been as close as Fresno State’s. Last week, the Spartans lost to UNLV by 3 points after quarterback Josh Love threw an interception in the red zone in the final minute of the game.

Tedford remarked that despite the Spartans’ record, they’re a good team that’s going through similar struggles to the Bulldogs with the close losses.

In the end, with both teams out of contention for anything major, the rivalry still runs deep and can set the tone for next season.

“It’s the pride and tradition in our program to dig deep and end the season strong,” Tedford said. “It’s our last time to be able to play as this group, a group who has worked really hard and trained hard together. We have one more opportunity to play together. You have the trophy. You have the rivalry. You want to end the season on a good note and carry into the offseason – seniors – all that stuff. It’s really about pride and trying to be successful in a rivalry game.”

On the Nevada loss:

“Well it was a back and forth thing. Getting down and then coming back, going ahead, field position hurt us a little bit. They made some big plays down the stretch, and we had the ball at the end there we couldn’t get it out of are end. Another close game that didn’t go our way, but we didn’t do well enough to win the game. They made more plays than we did.”

On how promising it looks for next season since many young players saw the field this year:

“A lot of promise with all the young guys that got an opportunity to play this year, and every game was competitive that we played in. Of course we wish that they would’ve gone the other way, but they didn’t. When you have 30 guys that left last year, there’s going to be a transition of some young guys playing. So some guys earned some valuable experience this year, and it can only help moving forward.”

On what surprised him the most this season in an area of the game that wasn’t where he expected:

“We lost a lot of guys on defense. We’re playing a lot of new guys on defense. I don’t think statistically we’re where we were last year on defense. We lost all three linebackers. We lost a corner. We lost a safety. There are a lot of new guys playing and at new positions as well. I think the difference would be that it wasn’t as high scoring last year of having to outscore everybody, because we kept people to low scores and that type of thing. It seems like this year it’s been a little bit of the opposite where there’s been high scoring games, we’ve had to try out some more people.”

On the approach for the last game:

On the Red Wave supporting the team throughout the season:

“Always appreciate the attendance and people coming out last weekend supporting the seniors. I feel bad that the games at home, they’ve been so close but they haven’t gone our way. I think for the fans they’ve probably been entertaining until the very end, but that doesn’t really help as we’re leaving the stadium, I’m sure. I appreciate them all, really, for supporting our program and these players.”